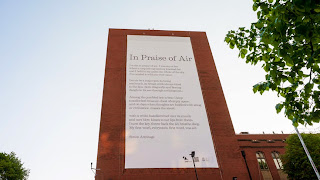 Here’s my Material Witness column for the July issue of Nature Materials – less techie than usual, so suitable, I think, for your tender eyes. (Not that you mind techie, but there are limits.)

Most poets probably harbour a hope that their poems might change the world, but none has taken that wish quite as literally as Simon Armitage, whose ‘In Praise of Air’ is the first ‘catalytic poem’. Displayed on a 10m by 20m panel on the side of a university building overlooking a busy road in Sheffield’s city centre, it is not just an ode to the vital joys of clean air but is actively producing that very stuff. The panel is coated with a layer of photocatalytic titanium dioxide nanoparticles that, when irradiated with sunlight (or indeed street lights), convert nitrogen oxides (NOx) adsorbed on their surface to nitrate.

The project is a collaboration with Sheffield materials scientist Tony Ryan, and has been funded as part of the city’s Lyric Festival of literature. As well as breaking down nitrogen oxides, the catalytic nanoparticles transform toxic volatile organic compounds into fatty acids. They are, of course, barely able to make a dent on the fumes from passing vehicles: each square metre of the display removes about 2g of NOx a day, about as much as is produced by a single bus.

But of course the point is to make a difference in another way: to create a visible and arresting symbol of the need to tackle air pollution. Armitage’s image of “days when thoughts are fuddled with smog/or civilization crosses the street/with a white handkerchief over its mouth” will be all too familiar with many urban dwellers, perhaps especially in China, where today mobile apps tell users whether or not the PM10 index (the level of airborne particulate matter smaller than ten micrometres across) is low enough for children to play safely outside.

That same objective motivates the technology from which this project arose: ‘catalytic clothing’, developed by Ryan with designer and artist Helen Storey, who specializes in art– science collaborations for fashion, design and technology. They have devised a process in which the titania nanoparticles can become attached to ordinary clothing fabric (so far cotton, but they are working on other fibres) during the laundering process, so that subsequently the wearer may combat air pollution simply by walking around. Ryan and Storey say that the effects are not insignificant: 30 people in catalytic clothing walking past a metre-width stretch of pavement every minute could effect a noticeable drop in levels of NOx. The duo are still trying to bring the idea to the market.

‘In Praise of Air’ is also singing the praises of materials. The technology is nothing particularly new, but Ryan’s work is a reminder that bringing a useful laboratory product to the attention of both investors and consumers is often a matter of engaging the imagination — and that this is where scientists can benefit from interactions with designers and artists. It shows too that serious problems can be tackled playfully and in ways that encourage the public to see that they can participate and not be merely the passive recipients of some cryptic and forbidding technology.
Posted by Philip Ball at 2:41 AM