The Return by Hisham Matar: why it's a special book 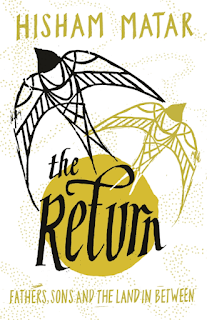 These were my comments on Hisham Matar’s book The Return for the Baillie Gifford Prize award event on 15 November. The prize, for which I was a judge, was awarded to Hisham’s close friend Philippe Sands for his extraordinary book East West Street.

When we produced our shortlist, and indeed our longlist, I felt pleased with and proud of it. But as my acquaintance with the shortlisted books has deepened, and perhaps particularly in the light of the political climate into which they emerge, I have felt something more than that. I’ve become passionate about them.

But it was passion that I felt about Hisham Matar’s book from the first reading. It tells of his quest to find out what happened to his father Jaballa in Libya during the Qaddafi dictatorship, after Jaballa was imprisoned in the notorious Abu Salim jail for his principled opposition to the regime. The Return of the title is Hisham’s return to Libya in 2012, 33 years after his family was exiled, when the Qaddafi regime had been overthrown. That was during what we now know to be a tragically brief period of grace before a descent into social and economic chaos created by the power vacuum.

Yes, the subject sounds difficult and bleak, but please believe me that this book is not that, not only that. It is wise and funny, it is perceptive to absurdity, to beauty and to friendship, as well as to terror and cruelty. Several times it was said in our judging meetings that Hisham’s book has a novelistic quality,

If this story were not factual, I would expect to see The Return on the Man Booker shortlist, and novelists could learn a great deal from Hisham’s impeccable handling of every scene, each of which unfolds at just the rate and in just the order it should, with precisely the words it needs and no more.

But calling the book novelistic could sound like a double-edged comment, as if to imply that perhaps the truth is sometimes held hostage to a nice turn of phrase. That is absolutely not the case. It feels hard to do justice to the brilliant construction of the book, the masterful handling of plot, suspense and intrigue, without seeming to reduce the magnitude of the subject to the dimensions of a thriller. But these aspects are really a mark of the achievement here, because even as they make the book a totally engrossing read, not once do they obscure the moral and artistic integrity of what Hisham has created.

Of course, he is an acclaimed novelist himself, but here he shows that there are qualities in literature far more significant than the apparent division between fact and fiction.

But it is factual. That is a sad and terrible thing, but it also makes The Return a sort of gift, an honouring of the history and suffering of individuals and a country.

There is something in it that brings to my mind Primo Levi’s testament If This is a Man. Like that book, this one can’t use art to expunge the awful, inhuman events that motivated it. But, in its quiet dignity, it shows us why we persist, and in the end, I think, why we prevail, in spite of them.
Posted by Philip Ball at 6:29 AM 5 comments: