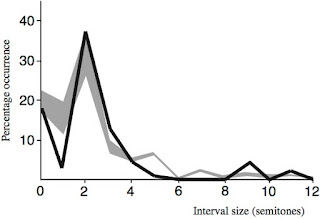 Sulzer’s whole point is that trying to define the perfect song according to some kind of measure of popularity is liable to end badly. I think Ferris is discovering that too.
Posted by Philip Ball at 3:45 PM 2 comments:

The cost of faking it

Here, a little belatedly, is my July column for Nature Materials, which considers the issues around bioprinting of fake rhino horn.

Debates about distinctions between “natural” and “synthetic” materials date back to antiquity, when Plato and Aristotle wondered if human “art” can rival that of nature. Scepticism about alchemists’ claims to make gold in the Middle Ages weren’t so much about whether their gold was “real” but whether it could compare in quality to natural gold. Such questions persisted into the modern age, for example in painters’ initial suspicions of synthetic ultramarine and in current consumer confusion over the integrity of synthesized natural products such as vitamin C.

It is all too easy for materials technologists to overlook the fact that what to them seems like a question of chemical identity is for users often as much a matter of symbolism. Luxury materials become such because of their cost, not their composition, while attitudes to the synthetic/natural distinction are hostage to changing fashions and values. The market for fake fur expanded in the 1970s as a result of a greater awareness of animal conservation and cruelty, but providing a synthetic alternative was not without complications and controversy. Some animal-rights groups argue that even fakes perpetuate an aesthetic that feeds the real-fur market, while recently there has been a rise in real fur being passed off as faux – a striking inversion of values – to capture the market of “ethical” fur fans. The moral – familiar to marketeers and economists if less so to materials scientists – is that market forces are dictated by much more than chemical composition.

These considerations resonate strongly in the current debate over plans by Seattle-based bioengineering company Pembient to use 3D printing for making fake rhinoceros horn from keratin. The company hopes to reduce rhino poaching by providing a synthetic alternative that, by some accounts, is virtually indistinguishable in composition, appearance and smell from the real thing. It claims that 45% of rhino horn traders have said they would buy the substitute. How to interpret that figure, even taken at face value, is unclear: will it help save the rhino, or does it show that over half of the buyers value something more than material identity? In the black-market Chinese and Vietnamese medicines that use the horn, it is supposed to imbue the drugs with an essence of the wild animal’s vitality: it is not just an ingredient in the same sense as egg is a part of cake mix, but imparts potency and status.

The same is true of the tiger bone traded illegally for medicines and wine. Even providing the real thing in a way that purports to curb the threat to wildlife, as for example when tigers are farmed in China to supposedly relieve the pressure on wild populations, can backfire in the marketplace: some experts say that tiger farming has revitalized what was a waning demand.

Critics of Pembient’s plans – the company intends to print tiger bone too – make similar complaints, saying that the objective should be to change the culture that creates a demand for these products rather than pandering to it. There’s surely a risk here of unintended outcomes in manipulating markets, but also a need to remember that materials, when they enter culture, become more than what they’re made of.
Posted by Philip Ball at 2:53 AM 1 comment: