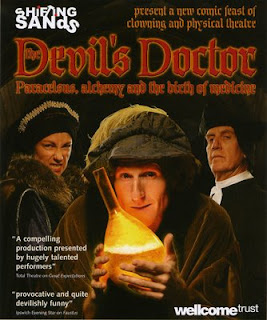 The Devil’s Doctor on tour

The title of this blog reiterates that which I used for my ‘virtual’ theatre company, in which guise I put on several productions some years ago. One of these was a one-man play about the sixteenth-century alchemist and physician Paracelsus, which turned out to be the precursor to my biography The Devil’s Doctor (Heinemann/Farrar Straus & Giroux, 2006).

Well, now Paracelsus is about to ride again. Whether any of that earlier show will survive remains to be seen, but from the end of January I’ll be attending rehearsals, as a consultant, for a new devised piece created by the wonderful company Shifting Sands, directed by Gerry Flanagan. Anyone who has seen previous shows by Shifting Sands, such as their adaptations of Great Expectations, Romeo and Juliet, or Faust, will know that this should be a riot of visual extravagance, clowning, physical ingenuity and pathos. Just, in fact, what the subject of Paracelsus cries out for, which indeed is why I approached Gerry in the first place to suggest a collaboration. We have generous funding from the Wellcome Trust to develop and perform the piece, and here is where you can see it from the end of February:

I would love to add another London date, as I think the Science Museum is going to be heavily booked. (Suggestions welcomed.)

In the course of researching this project, Gerry and I went along to the Wellcome Trust’s centre in Euston Road just before Christmas to watch two earlier biopics of Paracelsus. One was the 1943 film by G. W. Pabst, better known for Nosferatu. True to its function as something of a Nazi propaganda movie, this portrayed Paracelsus as a wise sage and hero of the common Volk, unfairly maligned by the authorities but always knowing best. All the same, it has interesting visual moments. The other was something else: a seven-part series made by the UK’s Channel 4 in 1989.

It’s no surprise that, in the early days of Channel 4, the quality of its output varied hugely, and was created on a minimal budget. All the same, seeing this series left me incredulous. For one thing, it beggars belief that someone could have come along and said ‘I have this great idea for a major series. It’s about a Swiss doctor from the Renaissance and how he got caught up in the political turmoil of the age…’, and the commissioners would say ‘Sounds great!’ Nothing like this would ever be entertained for an instant today. But it seemed even more remarkable when I discovered that the script, acting and screenplay are possibly the worst I have ever seen on British television. This would be a candidate for cult status if it weren’t simply so dull. Paracelsus is played by a young man with a hairstyle reminiscent of Kevin Keegan in his heyday. He spends much time gazing into space and straining to make us believe that the Deep and Mystical things he is spouting are Profound. Then we get shots of the Peasants’ War, which consists of half a dozen of the most half-hearted, self-conscious and obviously dirt-cheap rent-a-mob extras I have ever seen outside of Ricky Gervais’s series. They are falling over as other chaps in armour give them delicate blows with wooden swords. The scene is perhaps being filmed on Wimbledon Common. What budget there is has been lavished on (1) hats, and (2) a Star, namely Philip Madoc, who hams as though his life depends on it and who, having presumably signed in blood, is then given at least two different parts, one a crazed old seer and the other some noble or other whose identity I can’t even be bothered to recall. Anything set in this near-medieval period struggles against the spectre of Monty Python and the Holy Grail, but this production positively begs for such comparisons. My favourite scene was the book-burning in Basle, where Paracelsus lugs some unfeasibly immense tome that has painted on the front, in big white Gothic script, ‘Canon of Galen’. His syllabus for teaching at Basle is helpfully pinned up on the wall of the lecture theatre, written in English and in big bold letters that are for some reason in Gaelic script (well, it looks kind of olde – indeed, like the dinner menu at Rivendell). There is seven hours of this stuff. Needless to say, we’ll be shamelessly stealing material from it.
Posted by Philip Ball at 1:58 PM 3 comments: