The good news is that your future can be predicted. The bad news is that it’ll cost a billion euros. That, at least, is what a team of scientists led by Dirk Helbing of the ETH in Switzerland believes. And as they point out, a billion euros is small fare compared with the bill for of the current financial crisis – which might conceivably have been anticipated with the massive social-science simulations they want to establish.
This might seem the least auspicious moment to start placing faith in economic modelling, but Helbing’s team proposes to transform the way it is done. They will abandon the discredited and doctrinaire old models in favour of ones built from the bottom up, which harness the latest understanding of how people behave and act collectively rather than reducing the economic world to caricature for the sake of mathematical convenience.
And it is not just about the economy, stupid. The FuturIcT ‘knowledge accelerator’, the proposal  for which has just been submitted to the European Commission’s Flagship Initiatives scheme which seeks to fund visionary research, would address a wide range of environmental, technological and social issues using supercomputer simulations developed by an interdisciplinary team. The overarching aim is to provide systematic, rational and evidence-based guidance to governmental and international policy-making, free from the ideological biases and wishful thinking typical of current strategies.
Helbing’s confidence in such an approach has been bolstered by his and others’ success in modelling social phenomena ranging from traffic flow in cities to the dynamics of industrial production. Modern computer power makes it possible to simulate such systems using ‘agent-based models’ that look for large-scale patterns and regularities emerging from the interaction of large numbers of individual agents.
The FuturIcT proposal includes the establishment of ‘Crisis Observatories’ that might identify impending problems such as financial crashes, wars and social unrest, disease epidemics, and environmental crises. It would draw on expertise in fields ranging from engineering, law, anthropology and geosciences to physics and mathematics. Crisis Observatories could be operational by 2016, the FuturIcT team says, and by 2022 the programme would incorporate a Living Earth Simulator that couples human social and political activity to the dynamics of the natural planet.
Sceptics may dismiss the idea as a hubristic folly that exaggerates our ability to understand the world we have created. But when we compare the price tag to the money we devote to getting a few humans outside our atmosphere, it could be a far greater folly not to give the idea a chance.
Posted by Philip Ball at 11:12 AM 3 comments:

Here’s a little piece I wrote for Prospect, who deemed in the end that it was too hard for their readers. But I am sure it is not, dear blogspotter, too hard for you.
If you think quantum physics is hard to understand, you’re probably confusing understanding with intuition. Don’t assume, as you fret over the notion that a quantum object can be in two places at once, that you’re simply too dumb to get your mind around it. Nobody can, not even the biggest brains in physics. The difference between quantum physicists and the rest of us is that they’ve elected to just accept the weirdness and get on with the maths – as physicist David Mermin puts it, to ‘shut up and calculate.’
But this pragmatic view is losing its appeal. Physicists are unsatisfied with the supreme ability of quantum theory to predict how stuff behaves at very small scales, and are following the lead of its original architects, such as Bohr, Heisenberg and Einstein, in demanding to know what it means. As Lucien Hardy and Robert Spekkens of the high-powered Perimeter Institute in Canada wrote recently, ‘quantum theory is very mysterious and counterintuitive and surprising and it seems to defy us to understand it. And so we take up the challenge.’
This is something of an act of faith, because it isn’t obvious that our minds, having evolved in a world of classical physics where objects have well-defined positions and velocities, can ever truly conceptualize the quantum world where, apparently, they do not. That difference, however, is part of the problem. If the microscopic world is quantum, why doesn’t everything behave that way? Where, once we reach the human scale, has the weirdness gone?
Physicists talk blithely about this happening in a ‘quantum-to-classical transition’, which they generally locate somewhere between the size of large molecules and of living cells – between perhaps a billionth and a millionth of a metre (a nanometre and a micrometre). We can observe subatomic particles obeying quantum rules – that was first done in 1927, when electrons were seen acting like interfering waves – but we can’t detect quantumness in objects big enough to see with the naked eye.
Erwin Schrödinger tried to force this issue by placing the microcosm and the macrocosm in direct contact. In his famous thought experiment, the fate of a hypothetical cat depended on the decay of a radioactive atom, dictated by quantum theory. Because quantum objects can be in a ‘superposition’ of two different states at once, this seemed to imply that the cat could be both alive and dead. Or at least, it could until we looked, for the ‘Copenhagen’ interpretation of quantum theory proposed by Bohr and Heisenberg insists that superpositions are too delicate to survive observation: when we look, they collapse into one state or the other.
The consensus is now that the cross-over from quantum to classical rules involves a process called decoherence, in which delicate quantum states get blurred by interacting with their teeming, noisy environment. An act of measurement using human-scale instruments therefore induces decoherence. According to one view, decoherence imprints a restricted amount of information about the state of the quantum object on its environment, such as the dials of our measuring instruments; the rest is lost forever. Physicist Wojciech Zurek thinks that the properties we measure this way are just those that can most reliably imprint ‘copies’ of the relevant information about the system under inspection. What we measure, then, are the ‘fittest’ states – which is why Zurek calls the idea quantum Darwinism. It has the rather remarkable corollary that the imprinted copies can be ‘used up’, so that repeated measurements will eventually stop giving the same result: measurement changes the outcome.
These are more than just esoteric speculations. Impending practical applications of quantum superpositions, for example in quantum cryptography for encoding optical data securely, or super-fast quantum computers that perform vast numbers of calculations in parallel, depend on preserving superpositions by avoiding decoherence. That’s one reason for the current excitement about experiments that probe the contested ‘middle ground’ between the unambiguously quantum and classical worlds, at scales of tens of nanometres.
Andrew Cleland and coworkers at the University of California have now achieved a long-sought goal in this arena: to place a manufactured mechanical device, big enough to see sharply in the electron microscope, in a quantum superposition of states. They made a ‘nanomechanical resonator’ – a strip of metal and ceramic almost a micrometer thick and about 30 micrometres long, fixed at one end like the reed of a harmonica – and cooled it down to within 25 thousandths of a degree from absolute zero. The strip is small enough that its vibrations follow quantum rules when cold enough, which means that they can only have particular frequencies and energies (heat will wash out this discreteness). The researchers used a superconducting electrical circuit to induce vibrations, and they report in Nature that they could put the strip into a superposition of two states – in effect, as if it is both vibrating and not vibrating at the same time.
Sadly, these vibrations are too small for us to truly ‘see’ what an object looks like that is both moving and not moving. But even more dramatic incursions of quantum oddness might be soon in store. Last year a team of European scientists outlined a proposal to create a real Schrödinger’s cat, substituting an organism small enough to stand on the verge of the quantum world: a virus. They suggested that a single virus suspended by laser beams could be put into a superposition of moving and stationary states. Conceivably, they said, this could even be done with tiny, legged animals called tardigrades or ‘water bears’, a few tenths of a millimetre long. If some way could be devised to link the organism’s motion to its biological behaviour, what then would it do while simultaneously moving and still? Nobody really knows.
Posted by Philip Ball at 3:15 AM 4 comments: 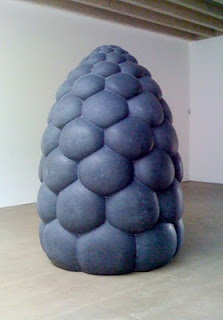 I have a little piece on the BBC Focus site about the work of sculptor Peter Randall-Page , with whom I had the pleasure of discussing pattern formation and much else at Yorkshire Sculpture Park last month. I will put an extended version of this piece on my web site shortly (under ‘Patterns’) in which there are lots more stunning pictures of Peter’s work and natural patterns.
Posted by Philip Ball at 8:07 AM 2 comments:

An uncertainty principle for economists?

The Times does The Music Instinct

There are some extracts from The Music in the Eureka science supplement of the Times today, although oddly they don’t seem yet to have put it online. It’s amongst a real mash-up of stuff about the ‘science of music’, which is all kind of fun but slightly weird to find my words crash-landed there. The editors did a pretty good job, however, of plucking out bits of text and getting them into a fairly self-contained form, when they were generally part of a much longer exposition.
I notice in Eureka that Brain May, bless him, doesn’t believe in global warming. “Most of my most knowledgeable scientist friends don’t believe that global warming exists”, he says. Come on Brian, name them. Have you been chatting to the wrong Patrick Moore ? (Actually, I’m not too sure if chatting to the other one would help very much.)
Posted by Philip Ball at 12:55 PM No comments: