The long shadow of Covid: a reply to Sunetra Gupta

It’s no surprise that Sunetra Gupta “view[s] the legacy of coronavirus from a different perspective” to me, as she writes in her letter (see below) in the latest issue of Prospect in response to my article. But why is this so? Let’s see.

She says that the effectiveness of lockdowns and mask-wearing is “very much a matter of debate (to put it mildly)”.

In a sense that is true: she and others who share her views continue to debate the issue. Scientific studies seem to present a fairly clear picture, however. For example, this study of the Italian lockdown, which gradually increased “in space, time and intensity” concludes that “It appears that the less rigid lockdown led to an insufficient decrease in mobility to reverse an outbreak such as COVID-19. With a tighter lockdown, mobility decreased enough to bring down transmission promptly below the level needed to sustain the epidemic.”

Or take this study of the effectiveness of lockdowns in France, which concludes that “Lockdown appears to have been successful not only in alleviating the burden on the intensive care units of the two most severely affected regions of France, but also in preventing uncontrolled epidemics in other regions.”

Or check out this factcheck from Reuters in November of last year which summarizes the clear evidence that lockdowns save lives.

This study of the “scientific consensus on the Covid-19 pandemic” meanwhile considers the alternative strategy preferred by Gupta: “allowing a large uncontrolled outbreak in the low-risk population while protecting the vulnerable.” It says “Proponents suggest this would lead to the development of infection-acquired population immunity in the low-risk population, which will eventually protect the vulnerable.”

But would that work? The authors of the study above are quite clear: “This is a dangerous fallacy unsupported by scientific evidence.”

That view is echoed by Jeremy Farrar, director of the Wellcome Trust and a member of the Scientific Advisory Group on Emergences, who calls out the fallacy of “focused protection” in his book with Anjana Ahuja, Spiked.

In short, the “focused protection” strategy it scientifically discredited.  It doesn’t even make sense even in its own terms. Simply put: if shielding everyone through lockdowns has resulted in 150,000 deaths in the UK, how then would shielding just a subset of the population result in fewer?

And who, in any case, do we “shield”? Gupta’s mantra of “protecting the vulnerable” is meaningless when we don’t even know who the vulnerable are. Sure, we know that older people are at higher risk, as are people with certain health conditions; given that these include, say, asthma and obesity, already that includes a substantial proportion of the population. But of course thousands of people died, and many more are suffering the effects of long Covid, who fall into neither of these categories. As we come to understand more about variations in the immune response to Covid, it might gradually become more clear who else is vulnerable to severe disease and who is not. But at the moment we have very little idea about that. So were all of us who were not in those first two high-risk categories supposed to just take our chances and hope for the best?

Gupta does the usual Great Barrington trick of emphasizing the problems of lockdown – which everyone acknowledges – without mentioning the downsides of the alternative. Yes, lockdowns of course take a terrible toll – on the economy and livelihoods, on mental health and general well-being. But death, illness and ongoing poor health from Covid do too. Pandemics are disruptive. Is the disruption greater when businesses shut down, production declines and supply chains are pared back, and hospitals have to postpone operations because of lockdowns, or when all these things happen because the virus is allowed to spread, huge numbers of people are sick, hospitals are overwhelmed, and people are terrified? Has Gupta even considered that equation?

It is hard to generalize about the economic impacts of different pandemic strategies – except that one trend does seem clear. Those countries that mounted an effective response, locking down early and rigorously, generally recovered faster and suffered less economic damage, as well as fewer deaths.

Gupta’s comment about people sitting “at home on their laptops sipping Chablis” is grotesque. It’s certainly true that the stresses of lockdown fell very unevenly on society, and that those who are most socioeconomically disadvantaged generally felt it most keenly – as indeed they were also at greater risk of catching and dying from Covid. That Gupta feels the answer to this is to mock all those who advocated for lockdown as comfortable and complacent, rather than facing up to how the pandemic has exposed the broader inequities of social inequality (which the present government has done nothing to address), perhaps tells us all we need to know. In any case, no one wants or likes lockdowns – they are an emergency measure of last resort, not something craved by the Chablis-sipping classes for God knows what reason. They cause problems for everyone (apart, perhaps, for the mega-rich).

I’m not sure what Gupta means by saying that SARS-CoV-2 “was never any more virulent than the other seasonal coronaviruses”. At face value this sounds like the naked misinformation of “it’s just like the flu” (or indeed just like the kinds of cold that some other coronaviruses cause). I’m assuming she doesn’t mean this, because that really would be utter nonsense – but then I’ve no idea what she does mean. Coronaviruses evidently have a wide range of virulence, from those mild seasonal ones to the terribly lethal SARS and MERS. SARS-CoV-2 seems to fall somewhere in between the two – fatally so, for this means that unlike SARS it can easily spread widely (and asymptomatically), while still being capable of killing millions. And yes, it can mutate to partly evade infection- and vaccine-induced immunity – which is one reason why the “herd immunity” approach won’t work, and why, as we are now seeing, it is a very bad idea to let it spread far and wide.

You might expect that someone who has been so wrong about so many crucial issues during the pandemic – claiming in April 2020 that we were already getting close to herd immunity, in May that the pandemic was on its way out, or in July that there wouldn’t be a second wave – would be somewhat chastened now. But perhaps instead it must be for the rest of us to heed that past record and stop listening.

Here's the letter from Professor Gupta: 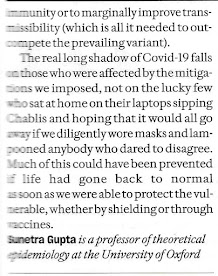 Posted by Philip Ball at 1:44 PM No comments: