How to get your starter for ten 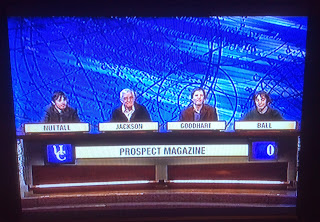 This piece started off headed for Prospect's blog, but didn't quite make it. So you get it instead.

For the first time in its 52-year history, the BBC’s student quiz show University Challenge has allowed the cameras behind the scenes to reveal how the teams get selected and what it’s like for them facing fiercely recondite questions while Jeremy Paxman barks “Come on!” at them.

Well, sort of. For of course what you’re seeing in these entertaining programmes is as carefully stage-managed and engineered as any other documentary. The Oxbridge teams look like cocky snobs, if not downright peculiar, while the redbrick teams are the plucky give-it-a-go underdogs played by James McAvoy in the UC-based film Starter For Ten. In the first episode the students hadn’t got within barking distance of Paxman, but already they had to jump through all manner of hoops, passing the grueling qualifying test and having to convince the BBC’s selection team of their telegenic potential (which makes you wonder, on occasion, what some of the teams who didn’t make the cut must have come across like).

What I think the programmes will struggle to convey, however, is the sheer terror of sitting behind those surprisingly flimsy tables with a red buzzer in front of you and a name panel that will light up to announce your desperate ignorance. I know, because I have done it.

In recent years, UC has staged occasional mini-tournaments dubbed “The Professionals”, in which the teams are composed not of fresh-faced students but jaded oldies representing a particular organization or guild, who have long forgotten, if they ever knew, how to integrate cosines or who was Stanley Baldwin’s Chancellor of the Exchequer. In 2006 Prospect magazine – “Britain’s intelligent conversation”, after all – was invited to take part, and I was asked to be the obligatory “scientist” on the team.

Let me say again: it was unspeakably scary. If I looked cadaverous, as my wife helpfully told me, it was because I had no sleep the night before we travelled up to Manchester to face the Paxman inquisition.

I had the distinct disadvantage – an inexcusable solecism, I now realise, for anyone who professes to know anything about anything – of not having watched the show previously, except for the one where Rik Mayall and pals pour water on the heads of Stephen Fry and the other toffs below. Students, don’t make that mistake. Only after repeated viewing do you see that you must trust your instincts and not double-check your answer before blurting it out. Yes, you might say something spectacularly foolish, but the chance is greater that you’ll be spot on. Now, I might add, I watch UC obsessively, like Christopher Walken driven by his trauma to repeat games of Russian roulette in the dingy bars of Hanoi.

So while I feel for the poor students having to work so hard to get on the show, that preparation is worth it. The Prospect team had the benefit only of watching a couple of old episodes at the editor and captain David Goodhart’s house, then taking a written test one gloomy evening in an empty office block in Farringdon. Then it was off to face the bright lights.

What contestants must know is that button technique is everything. You think that the person who buzzes is the one who knows the answer? As often as not, he or she just has the quickest finger. What’s more, too much knowledge can hinder as much as it helps – you start going down all kinds of blind alleys rather than plumping for the obvious. Our second game opened with the kind of question that contestants dream for, in which some obscure, random cache of information promises to make you look like a cultured genius. “Which cathedral city is associated with…?” Well, Paxman seems to be talking about the twelfth-century theologian John of Salisbury, one-time bishop of Chartres – although did he say the man was a biographer of Anselm of Bec or Anselm and Becket, which changes things…? Well let’s see, thinks the man who has just written a book on Chartres cathedral, John studied in Paris, so maybe… By which time the question has moved on to the vital clue that allows the opposite team to buzz in with “Salisbury”. (You see, I knew, I knew!)

But the Professionals have another disadvantage, which is that they will have been around for long enough to be supposed to have picked up some kind of expertise – and your reputation as an “expert” is therefore on the line in a way that it isn’t for tender undergraduates who have nothing yet to lose. The terror is not that you’ll fail to know obscure Pacific islands but that you’ll foul up on the easiest of questions about your own speciality. This can undo the strongest of us. You might think that Prospect’s previous editor would be justifiably confident in his encyclopaedic knowledge and cultural breadth, but in fact David became so convinced that there was going to be a question on the then-current government of Germany – German politics being his forte – that he was phoning the office moments before the game to get a rundown of all Angela Merkel’s ministers. Strangely, that question never came up.

I found the answer to something that might have puzzled you: how is it that Jeremy Paxman, betrayed by his researchers or his interpretation, occasionally gets away with announcing a wrong answer? The BBC team recognize that their research isn’t infallible, and all contestants are told that they can challenge a response if they think their answer has been wrongly dismissed – you have to buzz again. Such interruptions would be edited out anyway (the filming isn’t quite as smooth and seamless as it appears). But you tell me: who, especially if you are nineteen years old, is going to buzz Jeremy Paxman and tell him that he’s got it wrong? That’s how Paxo once got away with my favourite blooper, pronouncing incorrect the answer “Voodoo Child” to a question about that Jimi Hendrix song because he assumed that the slang spelling “Voodoo Chile” on his card implied that this must be a song about magical practices in the native land of Pablo Neruda.

And what do you do if your answer is not just wrong but spectacularly so, a blunder that plunges you into a James McAvoy moment, filling a million screens with your mortification? A member of our team showed the way. A man of immense learning, his answer was so obviously wrong that my jaw dropped. But if he died inside, you would never have known it from his nonchalant smile. Such a dignified and elegant way of dealing with a screaming gaffe is worth aspiring to.

Yes, it’s all about lessons in life, students. And let me tell you that the most important is the hoary old claim of the loser: it’s how you compete, not where you finish. When we learnt that the winning side in our competition had been practising with home-made buttons for weeks, and when they gracelessly said they hoped we’d win our second round because “we knew we could beat you”, then I knew that there are indeed more important things than coming first.

Would I go through it all again? I’m not sure my wife would let me, but I’m a little ashamed to say that I wouldn’t hesitate.
Posted by Philip Ball at 3:05 PM

The best contestants would probably be cold calculating psychopaths, rather than deep original thinkers. This would explain why girl teams do so well, and yet contribute very little to original thought generally.