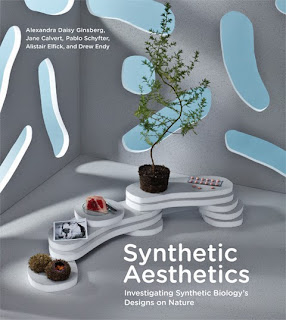 …and here’s a review of an interesting book which also appears in the current issue of Chemistry World (along with a piece by Andy Extance on Alexandra Daisy Ginsberg’s work).

There’s no denying the gee-whiz appeal of synthetic biology. Its often stated objective is to “re-engineer life”: to redesign living systems like bacteria as if they were machines, in particular fitting them out with gene circuits for doing new and useful things, such as turning plant matter into fuel or pharmaceuticals. It sounds like a green (perhaps literally) solution to big global problems. What’s not to like?

Synthetic Aesthetics makes a bold and brave attempt to explore that question. The book results from an innovative project funded by the ESPRC and the US National Science Foundation, which brought together artists, designers, scientists and sociologists in 2009 for an intensive workshop that debated what synthetic biology might and might not mean.

Such a diverse mix is already unusual. Better still, they didn’t convene just to celebrate and propagate the field, but rather, to criticize it in the proper sense of the word: to ask whether it is evolving along the right tracks, and where these might lead. When artists and scientists are put together, the usual hope is that the research will stimulate artistic expressions. But here the interaction is more ambiguous, even fraught: the artists played the role of provocateurs, suggesting possible futures that question the assumptions and motivations of the scientists.

That ambivalence is evident throughout the book. When artist Alexandra Daisy Ginsberg suggests that “useful fictions can unintentionally become embedded in the language of the field, even shaping it”, she touches on a problem for all areas of science. And the artists here display a commendable resistance to being conscripted to sell the science, a common outcome of sci-art collaborations. For instance, while the scientists seem keen to clothe their work in a clean, shiny image that refers to circuits and Lego bricks, the artists were determined to remind us of the messy, visceral and sometimes disgusting nature of biology.

“Synthetic biology is a contemporary example of a field that employs artists and designers as part of a concerted effort to engineer public acceptance for a technology that does not yet exist”, write artist Oron Catts and microbiologist Hideo Iwasaki. Catts in particular feels that this propagandist effort needs to be challenged. Despite – or perhaps because of – his scepticism, he decided to be a part of the project since he felt it could be more productively interrogated from inside than from out. His engagement has been remarkably deep: having learnt the biotechnological methods needed to create works from living matter, he runs a collective called SymbioticA from a laboratory at the University of Western Australia which has been at the forefront of an artistic exploration of synthetic biology.

One of Catts’ main complaints is that the engineering paradigm is over-stretched in biology. I agree, for reasons I can’t expand on here. Genetic circuits evidently are somewhat amenable to redesign, but we have no real idea yet how far that metaphor can be taken.

Another debate exists around the whole concept of design itself. Is life itself already “designed” by evolution? It looks that way, and many scientists, here including synthetic biologist Drew Endy, argue that it is. But social scientist Pablo Schyfter counters persuasively that “only people design”, not least because design involves values – and the question is then, whose values? Besides, saying that nature designs is like saying that, if you make a billion randomly shaped pegs and find one that fits the hole, that one peg was designed.

I was left with a burning question: why hasn’t this sort of exercise happened before in other fields? Chemistry is particular cries out for it. Instead of rhapsodizing about the aesthetics of beautiful molecules, we should bring in more artists to challenge our convenient fictions.
Posted by Philip Ball at 1:54 PM