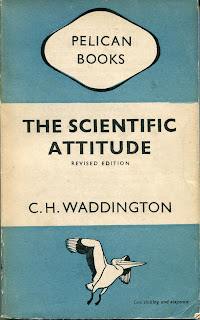 Here is my piece on “Pelican blue” from this month’s Chemistry World, which is a lovely special issue on chemistry and art.

The relaunch of Pelican Books, an imprint of Penguin, in May prompted fond reminiscences about these distinctive, low-cost non-fiction paperbacks. The series began in 1937 with George Bernard Shaw’s The Intelligent Women’s Guide to Socialism, Capitalism, Sovietism and Fascism, which exemplified its efforts to cover serious topics in an accessible but non-patronizing manner. Offering such titles at the cost of a packet of cigarettes was a radical idea for its time, and Penguin’s claim today that the books “lower[ed] the traditional barriers to knowledge” seems amply justified by the tributes the relaunch has elicited. Several readers from unprivileged backgrounds attested that Pelicans were their introduction to the world of thought.

I have been surprised to see how many of the trademark blue covers are dotted around my bookshelves. There is C. H. Waddington’s The Scientific Attitude (1941), for example, and Plastics in the Service of Man (1956) by E. G. Couzens and V. E. Yarsley attests that chemistry wasn’t neglected. However, the reason why chemists in particular might celebrate the rebirth of Pelican is not so much because of what lies between the covers but what lies on their surface.

For the feature that defined Pelicans was that blue: a shade veering towards turquoise, which chemists will recognize instantly as a copper pigment of some kind. In fact, Pelican covers supplied one of the earliest, and surely the most familiar, applications of a new and important class of colorant compounds: the phthalocyanines. Pelican blue is copper phthalocyanine, discovered in 1928, which was sold under the trade name monastral blue.

Like many colouring agents throughout history, this one was found by accident. In the late 1920s scientists at Scottish Dyes in Graingemouth – soon to merge with ICI – were investigating a blue impurity that appeared during the manufacture of phthalimide, which was used to synthesize another blue dye, indigo. I recommend the short film documenting history of this investigation - not just for the splendidly absurd pre-war diction of the narrator but for tips on how to conduct a chemical analysis while stylishly smoking a pipe.

The isolated impurity was studied in detail by R. Patrick Linstead at Imperial College. In 1934 he showed that the coloured material had some structural affinity with the porphyrin at the heart of chlorophyll, being a four-ring heterocyclic organic compound with a metal atom (here copper) at its centre [1]. Linstead christened this structure phthalocyanine.

Over the next two or three years it was developed as a commercial pigment by ICI, where a chemist named Charles Enrique Dent patented a method of making monastral blue. Dent went on to have a colourful career, working on invisible ink as a consultant for the British censorship department during the war, and being fictionalized as a villain shot by James Bond in Ian Fleming’s Dr No. The juicy details are in Kristie Macrakis’s recent book Prisoners, Lovers and Spies (Yale University Press, 2014).

Phthalocyanine blue “will soon be covering the printed pages”, proclaimed one Professor Tattershall of the University of Western Australia in 1936. He was more literally correct than he might have imagined, for it was seen at once as an eye-catching but sober hue for the Pelican covers. The artists’ paint company Winsor and Newton began using phthalocyanine blue and a green chlorinated version for their paints in the late 1930s, and still makes them today.

The Scottish Dyes chemists were not quite the first to see copper phthalocyanine, for it was also synthesized by accident in 1927 by two chemists in Switzerland, Henri de Diesbach and Edmond von der Weid [2]. It pleases me that the first of these authors has essentially the same surname as the alchemist who, around 1704-5, serendipitously discovered another blue pigment in Berlin while attempting to make something else – this was Prussian blue, which, like the phthalocyanines, remains a compound of great interest to modern chemists.

Of course, the most famous accidental discovery of a colorant was William Perkins’ discovery of mauve in 1856. ICI was one of the many chemical giants that emerged in the early twentieth century on the back of the revolution in synthetic dyes spawned by Perkins’ work. One of its precursors was the Manchester dye manufacturer Levinstein Ltd, which grew out of a plant set up at Ellesmere Port to make indigo beyond the reach of German patent law. Levinstein merged with British Dyes, and the resulting company then merged with others in 1926 to become ICI. I would love to know whether ICI’s famous early logo was also printed in monastral blue; it certainly looks like it.

Sadly, the new Pelicans won’t be using this pigment for their covers and spines, however. They are going for a mix of inks that gives Pantone 3105 U, which is more turquoise than the original. But the exact colour had already mutated somewhat during the first life of Pelicans. Chemistry, I suppose, moves on.

Your short film is not there. "Sorry, the page you were looking for in this blog does not exist."

Sorry Jon - worked for me, but I've loaded it again anyway...