How the clam got its glam 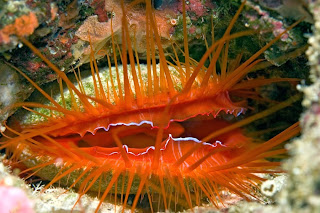 This piece was for Nature news. For more on animal photonics, look here. Congratulations, by the way, to Peter Vukusic (reference 2) for his IOP Bragg medal.

As molluscs go, Ctenoides ales is one of the most flashy – literally. A native of the Indo-Pacific region, the creatures is popularly known as the “disco clam” because the soft tissues of its “lips” flash like a disco ball. But how, and why? A new study published in the Journal of the Royal Society Interface has begun to supply answers.

The clam’s flashes look like bioluminescence – emission of light – but in fact they are due entirely to reflected light. Lindsey Doughterty of the University of California at Berkeley and her coworkers have figured out how C. ales does the trick – and find that so far it’s apparently unique in nature. “We don't know of anything that is quite like the disco clam”, says Dougherty.

They show that the reflections are caused by spheres of the mineral silica – chemically like tiny grains of sand – synthesized by the organism and sequestered into one side of the mollusc’s mantle lip. The other side of the lip contains no spheres, and in contrast is highly absorbing, appearing a reddish colour.

The flashing occurs as the mollusk repeatedly rolls up and unfurls each side in concert, several times a second.

"To my knowledge, this reflectance from micro-silica in this critter, with a muscle-driven 'shutter' that creates rapid blinking, is unique," says Daniel Morse, a molecular biologist at the University of California, Santa Barbara.

Many animals create “photonic” structures that reflect and scatter light, often using orderly arrays of light-scattering objects with a size comparable to the wavelengths of visible light: several hundreds of nanometres. For example, stacked platelets of dense protein-based tissue are responsible for some of the bright colours of butterfly wings and bird feathers. Squid can manipulate the spacing of these platelets to reflect different colours.

But it’s unusual for such structures to reflect the whole visible spectrum, as in C. ales, so as to appear white. Some beetles make their white cuticle this way [2], and some butterflies have white wing scales studded with reflective beads [3].

The disco clams are also unusual in using silica as the reflector. Some marine diatoms have photonic structures in their silica exoskeletons, but these are not broadband [4], and a weevil also uses silica bead arrays [5]. Doughtery and colleagues find that the spheres have a rather narrow size distribution centred at a diameter of about 300 nm, and they calculate that this makes them near-optimal for reflecting the blue-green light (wavelengths of 400-500 nm) that predominates in the mollusc’s marine habitat.

But why does it do it? The researchers don’t yet know. They’ve found that the clams change the flashing rate in tests that mimic the looming presence of a predator, suggesting that it might function to ward off such threats. But Doughterty says that the flashing could also be a spawning signal to attract other clams, or might be a lure for the plankton on which the clams feed.

Whatever the case, it could be a trick worth learning. Other “animal photonics" have inspired engineers seeking new ways to manipulate light, and C. ales might do likewise. Doughterty is particularly impressed with low well the reflectors work in low light. “There could be biomimicry potential in low-light situations or in environments that are dominated by blue-green wavelengths”, like subsea locations, she says.