The physics of marathons 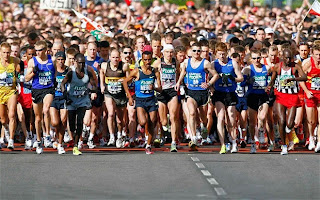 Here, just in time for the London Marathon, is my latest piece for BBC Future. And now I know where the cover of Critical Mass came from.

Around 40,000 people will run the London Marathon on 13 April this year. But if you’re a serious long-distance runner, don’t come with high expectations. “I have to admit to being completely frustrated by the congestion and for 18-19 miles was just dodging people and being held up”, one participant grumbled after the 2012 event. “I had to overtake a lot of people and ended up with bruised forearms from all the elbows”, said another. “People couldn't let you past for a lot of the way.”

There’s no getting away from it – mass running events like this are likely to be congested. But could the crowding problems be reduced, without restricting the number or calibre of participants? The issue here differs rather little from one that has received far more attention: how to optimize traffic flow on our roads. And while the stakes on the road are much higher – congestion comes at considerable cost in pollution, economic losses and personal inconvenience, while a collision could leave you with far worse than a bruised arm – nonetheless there can also be real dangers from bottlenecks and jams in marathons.

This is why Martin Treiber of the Technical University of Dresden has set out to devise computer models that can predict the flows of participants in marathons and mass cross-country skiing events. Treiber has previously developed models for understanding road traffic flows, and he says that these can be adapted in relatively straightforward ways to capture the essential details of how runners and skiers behave en masse.

One of the first attempts to model traffic flow was made in the 1950s by James Lighthill, an expert on fluid flow, and his collaborator Gerard Whitham of Manchester University. They considered the traffic as a kind of liquid flowing down a pipe, and looked at how the flow changes as the fluid gets denser. At first the flow rate – the amount of stuff you can pump through the pipe in a given time – increases as the density increases, since you simply get more stuff through in the same period of time. But if the density becomes too high, there’s a risk of blockages occurring, and then the flow rate plummets – you have a jam.

Treiber’s model of a marathon, described in a preprint, invokes this same principle that the flow rate first increases and then decreases as the density of runners increases, thanks to an abrupt switch from free to congested flow. He assumes that there is a range of different preferred speeds for different runners, which each sustains throughout the race. With just these ingredients, Treiber can calculate the flow rate of runners, knowing the ‘carrying capacity’ at each point on the route. For example, when the route narrows at bottlenecks, so that the maximum ‘free flow’ rate is lower, the model predicts how congestion might develop and spread elsewhere.

This allows Treiber to figure out how congestion might depend on the race conditions – for example, for different starting procedures. Some marathons start by letting all the runners set off at once (which means those at the back have to wait until those in front have moved forward). Others assign runners to various groups according to ability, and let them start in a series of waves.

Treiber has applied the model to the annual Rennsteig half-marathon along a hiking trail in the Thüringian Forest of central Germany, which attracts around 6,000 participants. In 2013, because the police were no longer willing to close a road to ensure that runners could cross safely, the traditional route had to be altered. It could pass either over a 60m wooden hiking bridge or through a tunnel. Treiber used his model to predict the likely congestion incurred in the various options. If the bridge were to be used, it was important to ensure it did not get too overloaded with runners – a danger if bottlenecks ahead of the bridge spill back onto it. The model predicted that a mass start would certainly risk this, but so, to a lesser degree, would wave starts (which the Rennsteig uses). Only by moving the starting point further back from the bridge could the danger be avoided – and even then, if some of the numbers assumed in the model were only slightly inaccurate, there was still a risk of jams reaching the bridge.

Treiber and his coworkers found that no dangerous congestion seemed likely for the tunnel route. The run organizers consulted with Treiber’s team, and eventually chose this option. They also adopted the team’s recommendation for a wave start with delays of about 150 seconds between waves.

Treiber and his coworkers have adapted his model to describe mass skiing events such as the cross-country Vasaloppet hosted each year in Sweden, a 90-km race that draws around 15,000 participants. This is a more complicated situation to model. Partly that’s because the speed of the skiers can depend quite dramatically on the slope of the course, especially when it is uphill. Treiber built this explicitly into his model, deducing the gradient of the course from Google Maps and applying rules that describe how speed depends on slope. He also included lane-changing rules, since the entire course is divided into well-defined lanes. His computer simulations predicted that massive jams, delaying participants by up to 40 minutes, would form where the route has a steep uphill gradient – just as is seen in the real event. The Vasaloppet has a mass start – but Treiber says that if it could be persuaded to adopt a wave start, with 5-minute delays between waves, all the jams would disappear. Whether the organizers will accept this “wisdom for the crowd” remains to be seen. 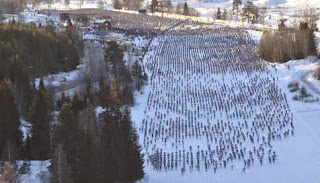