Last of the independents?

Here’s another take on the Lovelock fest at the Science Museum, written for the Prospect blog.

If there’s one thing mavericks share in common, it’s that they contrive or refuse ever to admit that they’re wrong about anything. By this measure, the title of the new exhibition at the Science Museum in London – Lovelock Unlocked: Scientist, Inventor, Maverick – does James Lovelock, the father of the Gaia hypothesis, a disservice. When I spoke to him on the eve of the opening on 9th April, he admitted almost merrily that his earlier, dire warnings about the impending collapse of the population, and perhaps of civilization, because of global warming were over the top. Things look grim, he says, but not that grim. This is because we now understand that there are natural processes and systems, such as the immense capacity of the oceans to absorb heat, that might buffer us against the worst-case scenarios of the effects of increased amounts of greenhouse gases such as carbon dioxide in the atmosphere. The fact is, Lovelock explained, it is really no big deal for him to admit to a mistake, for who is going to reprimand him, an independent scientist beholden to no one?

But perhaps Lovelock is also so ready to admit to the occasional error – here more of judgement and foresight rather than science – because time has shown him to be right about a good deal else. And he’s no stranger to accusations that he is wrong, which is where that “maverick” label comes from: by some standards, all this means is that some famous people have disagreed with you. In the early days of the Gaia hypothesis that Lovelock cooked up with microbiologist Lynn Margulis in the 1970s, evolutionary biologists in particular were queuing up to disagree with him, often in such vituperative terms that the arguments were evidently not about science alone. John Maynard Smith, an architect of neo-Darwinism, denounced Gaia as an “evil religion”, thinking that Lovelock’s talk of “goals” and “purposes” – which seemed unexceptional to him as an engineer – transgressed the central (and perfectly true, as far as all evidence indicates) tenet of evolution that it has no direction or aim. Lovelock delights now in Maynard Smith’s admission that he’d not actually read Lovelock’s books or papers but just relied on second-hand descriptions. But Maynard Smith also told Lovelock in an affable letter in 1993 that neo-Darwinists responded as they did not just because they saw Gaia as “a loose and unjustifiable extension of evolutionary thinking” but because they too “have felt themselves to be a persecuted group.” That is understandable (particularly across the Atlantic), but it also explains the extreme conservatism that still characterizes some neo-Darwinists.

So is Lovelock right or wrong? An exhibition like this invites us to see him as the outsider whose theories have now been vindicated and accepted by the scientific establishment. But the real story is much more interesting than that tired trope. While the objections of the biologists were not without force (even if some were ultimately semantic), the Gaia hypothesis is not really a theory that can be proved or disproved. It is a way of thinking about the issues – in this case, the issues of how our planetary environment came into being and maintains itself. Lovelock was not the first to suggest that these processes might involve interactions between different parts of what we now call the “earth system” – the circulation of the oceans and global air temperatures, say – but no one previously had started to put the whole picture together in an explanation of how the earth “self-regulates” its climate. Inevitably, some parts of that picture were seen clearly, others less so. And in any event, what the Gaia hypothesis consists of has evolved and mutated too much over the years for it to be regarded, like special relativity, as an idea that sprang fully formed from its creator’s mind, ripe for experimental testing.

Yet what really marked out Lovelock’s idea as original was the role he asserted for life on earth – the biosphere – as a literally vital component of how our planet achieves homeostasis (relative stability of climate) in the face of changing circumstances. This was, of course, precisely why he was deemed to be trespassing on the territory of biologists, with neither permission nor the proper training (although Lovelock did begin his career in the Medical Research Council). He argued that biological processes such as plant growth (which withdraws CO2 from the atmosphere) and bacterial dissolution of rocks have a key role in the way chemical elements are cycled between the seas, air, soil and stone, and ice – and in consequence, how climate is determined and changed. There is no real debate now that Lovelock was right about this, although he feels that the acceptance of the earth-sciences community has come only grudgingly and on condition that the disturbingly personified Gaia hypothesis be recast as “earth systems science”.

As an example of how living organisms affect the “inorganic” features of the climate system, in the early 1990s Lovelock teamed up with atmospheric scientists Robert Charlson, Meinrat Andreae and Stephen Warren to develop a hypothesis involving the ‘sulphur cycle’ – reactions and processes involving sulphur compounds. They pointed out that marine plankton give off a sulphur-containing gas called DMS as part of their metabolism, and that this is transformed in the atmosphere to sulphate, which clusters into a sort of dust of tiny salt-like particles that can seed the formation of cloud droplets. Because clouds reflect sunlight, they can alter the climate. In the so-called CLAW hypothesis, the plankton act as a negative-feedback thermostat that regulates a steady climate. If the seas warm, the plankton produce more DMS, there’s more sulphate to feed cloud formation, and so less sunlight gets through and the oceans cool down. It now seems that the idea doesn’t work – all of these things happen to some degree, but the feedbacks are more complex and subtle. Yet even so, this idea illustrates the virtue of the Gaia hypothesis in stimulating an interesting proposal, based on well established principles, that was deemed worth testing carefully (the apparent nail in the coffin came only in 2011).

Ironically – although here I risk drawing more ire from biologists – this aspect makes Gaia not unlike the notion of Darwinian evolution. That’s to say, it describes something that evidently happens in the world, and indeed you really can’t think properly about the process concerned (climate, evolution) except in this light. But that doesn’t mean that the idea explains all that happens, or that what it predicts will always be what you find. Indeed, the essence of the Gaia hypothesis – that all these various influences on climate combine to keep it steady and self-regulating in the way our bodies stabilize their temperature – still lacks any proof, and some earth-systems scientists say that the hypothesis just doesn’t fit with the evidence.

But maybe it’s right to judge Gaia more by her fertility and productiveness than by some putative test of right or wrong. As Vivienne Westwood, a Lovelock supporter, said at the gala organized to launch the Science Museum’s project, it isn’t a question of whether someone should be regarded as a scientist or an artist, but of whether or not they are imaginative. Scientists might sniff that one can imagine endless false theories, but real imagination in science is about offering a new way to think about a problem.

However, the most interesting parts of this exhibition, as of Lovelock’s new book A Rough Ride to the Future (Allen Lane, 2014) don’t have anything to do with Gaia or climate change. They are about Lovelock the inventor. This is what makes Lovelock’s career not merely productive and interesting but remarkable. He has invented over a hundred useful devices, including the electron capture detector that enabled him to detect small traces of chlorofluorocarbon (CFC) gases in the atmosphere in the late 1960s, leading to a realization that these industrial reagents (used as refrigerants) were gradually accumulating and could, once they reached the frigid stratosphere over the poles, undergo chemical reactions that destroy ozone, the planet’s protective screen against harmful ultraviolet radiation from the sun. Lovelock also claims to have invented the first microwave oven, which he used to defrost hamsters frozen for experiments during his early stint at the Medical Research Council. Several of these contraptions are displayed in the exhibition, and they have a wonderful Heath Robinson quality that belies their precision and artistry – it was the unprecedented sensitivity of the ECD that revealed the tiny but potentially damaging traces of CFCs. Lovelock fashioned all of these instruments himself by hand, many in the private laboratory that he set up in Launceston on the Cornish border, and proceeds from their sales or patents allowed him to become an independent scientist. This practical side of Lovelock’s imagination is not by any means a sideline: it was because he understood the scientific principles that they worked so well, and the positive feedback between making and thinking is very apparent in his work. It’s not necessary for a good scientist to be a good inventor or technician, neither do inventors need to have a strong grasp of scientific theory – witness the sometimes shaky ideas of Thomas Edison and Nikola Tesla. But those who possess both can do and see things that other cannot. That is as true of Lovelock’s scientific heroes Michael Faraday and Alan Turing as it is of the man himself.

At one point, after visiting Lovelock’s home to look at the paper archives, the Science Museum curators were so taken with the creative chaos of his laboratory that they harboured a desire to acquire the whole thing for the project too. But there was a problem with that. “Unfortunately”, project leader Alexandra Johnson told me, “because Jim works by himself and doesn’t have to abide by health and safety regulations, there were too many hazards. There was radiation, mercury, asbestos, Semtex, just about anything you could possibly imagine. There was a particularly dubious cupboard which he used for storing chemicals in, and the lab had been flooded. We opened this cupboard and very quickly shut it again, because we were not quite sure what was going on in there.”

So instead they acquired some selected items, such as the lathe Lovelock used to make his instruments, and the “Mars jar” – a repurposed Kilner jar used to simulate the Martian atmosphere and test the detectors he developed for NASA’s Viking lander missions in the 1970s.

As far as Gaia is concerned, Johnson says that an attraction for the Science Museum is that “it’s still work in progress. There’s still a lot of conversation and dispute and debate happening around it. It is rare that we are able to show this way that scientific ideas get argued and fought over.” 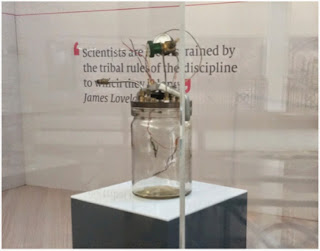 The "Mars jar" in Lovelock Unlocked.
Posted by Philip Ball at 1:06 PM