Small is... sort of cute 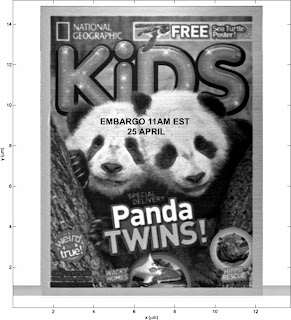 This little story went on the Guardian site on Friday. The technology isn’t new, but it was a very cute way to introduce the commercialization of it.

It looks much like any other cover of the children’s magazine National Geographic Kids. Cuddly animals: check. Free Sea Turtle poster: check. Story about rescued hippos: check. Only the lack of colour and the slight graininess makes you think it might be something other than the real thing. But the real reason for these imperfections is that this magazine cover is so small that a single human red blood cell would cover most of it. It measures just 11 by 14 thousandths of a millimetre, and is totally invisible to the naked eye.

This is officially the Smallest Magazine Cover in the World, having been certified as such today by the Guinness Book of Records at the US National Science and Engineering Festival in Washington DC. The image is carved out of a lump of plastic using, as a chisel, a tiny silicon needle 100,000 times sharper than the sharpest pencil tip. The contrast reflects the topography of the surface: the higher it is, the lighter it appears.

The technique was developed over the past five years by physicist Armin Knoll and his colleagues at IBM’s research laboratory in the suburb of Ruschlikon in Zurich, Switzerland. The needle, attached to a bendy silicon strip that scans across the sample surface, is electrically heated so that when it is brought close to the specially developed plastic, the material just evaporates. In this way the researchers can remove blobs of material just five nanometres (millionths of a millimetre) across, paring away the surface pixel by pixel like a milling machine.

By reducing the heat, the tip can be used to take a snapshot of the carved structure it has produced. Surrounded by plastic in a valley, the tip radiates away more heat than if it hovers above a peak, and this heat flow therefore traces out the surface contours.

The IBM team first reported the method in 2010, and I saw it in action in Ruschlikon two years ago. It was a strange experience. Because I was once an editor at the science journal Nature, Knoll and his colleagues decided to write out the journal’s logo for me. On the display screen the letters took shape one by one, each perfectly formed in Times New Roman as if by a rather slow printer. It was hard to believe that each of them was about the height of a single bacterium.

IBM has licensed this technology to a start-up company in Zurich called SwissLitho, founded in 2012 by former IBM scientists Philip Paul and Felix Holzner. The company has developed it into a commercial machine that they call the NanoFrazor, costing around half a million euros. McGill University in Montreal, Canada, has bought the first of them. “It’s a cool tool”, says McGill physicist Peter Grutter. He says that, quite apart from the ability to make tiny structures for electronics, part of the attraction is that, unlike other nanopatterning methods, it’s very easy to find where you are on a surface and so to take images of large areas or to go back and overlay a second pattern.

The National Geographic Kids cover was made by Knoll’s team after running a readers’ poll to select their favourite image. Although Holzner expects the instrument to be mainly used as a research tool for universities like McGill, he suspects that novelty applications like this might prove popular too. It could be used to add security tags to artworks, passports and personalized Swiss watches that would be virtually impossible to forge. Some companies have already used other nanopatterning methods to write the entire Bible on a crucifix for especially devout customers, and even to engrave tiny patterns on the surface of chocolate that scatter light to create different colours. It seems that the Swiss reputation for both precision engineering and fancy confectionery is as secure as ever.
Posted by Philip Ball at 2:14 PM