This is my Materials Witness column for the August issue of Nature Materials. I normally figure these columns are a bit too specialized to put up here, but this subject is just lovely: there is evidently so much more to the "sword culture" of the so-called Dark Ages, the Viking era and the early medieval period than a bunch of blokes running amok with big blades. As Snorri Sturluson surely said, you can't beat a good sword.

There can be few more mythologized ancient materials technologies than sword-making. The common view – that ancient metalsmiths had an extraordinary empirical grasp of how to manipulate alloy microstructure to make the finest-quality blades – contains a fair amount of truth. Perhaps the most remarkable example of this was discovered several years ago: the near-legendary Damascus blades used by Islamic warriors, which were flexible yet strong and hard enough to cleave the armour of Crusaders, contained carbon nanotubes [1]. Formation of the nanotubes was apparently catalysed by impurities such as vanadium in the steel, and these nanostructures assisted the growth of cementite (Fe3C) fibres that thread through the unusually high-carbon steel known as wootz, making it hard without paying the price of brittleness.

Yet it seems that the skill of the swordsmith wasn’t directed purely at making swords mechanically superior. Thiele et al. report that the practice called pattern-welding, well established in swords from the second century AD to the early medieval period, was primarily used for decorative rather than mechanical purposes and, unless used with care, could even have compromised the quality of the blades [2].

Pattern-welding involved the lamination and folding of two materials – high-phosphorus iron and low-phosphorus mild steel or iron – to produce a surface that could be polished and etched to striking decorative effect. After twisting and grinding, the metal surface could acquire striped, chevron and sinuous patterns that were highly prized. A letter to a Germanic tribe in the sixth century AD, complimenting them for the swords they gave to the Ostrogothic king Theodoric, conqueror of Italy, praised the interplay of shadows and colours in the blades, comparing the pattern to tiny snakes. 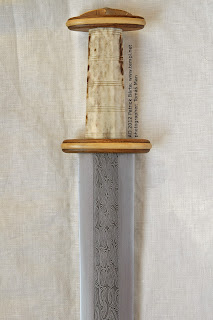 This and the image above are modern pattern-welded swords made by Patrick Barta using traditional methods.

But was it all about appearance? Surely what mattered most to a warrior was that his sword could be relied on to slice, stab and maim without breaking? It seems not. Thiele et al. commissioned internationally renowned swordsmith Patrick Barta to make pattern-welded rods for them using traditional techniques and re-smelted medieval iron. In these samples the high-phosphorus component was iron and not, as some earlier studies have mistakenly assumed, steel.

They subjected the samples to mechanical tests that probed the stresses typically experienced by a sword: impact, bending and buckling. In no cases did the pattern-welded samples perform any better than hardened and tempered steel. This is not so surprising, given that phosphoric iron itself has rather poor toughness, no matter how it is laminated with other materials.

The prettiness of pattern welding didn’t, however, have to compromise the sword’s strength, since – at least in later examples – the patterned section was confined to panels in the central “fuller” of the blade, while the cutting edge was steel. All the same, here’s an example of how materials use may be determined as much by social as by technical and mechanical considerations. From the Early to the High Middle Ages, swords weren’t just or even primarily for killing people with. For the Frankish warrior, the spear and axe were the main weapons; swords were largely symbols of power and status, carried by chieftains, jarls and princes but used only rarely. Judging by the modern reproductions, they looked almost too gorgeous to stain with blood.

Metallurgy is a word that almost sounds magical in nature. In all truth, it really is pretty amazing the kind of effects it can have on the materials it treats. No doubt many of these techniques and methods have been lost throughout history and are yet to be rediscovered.
http://www.pacmet.com/index.php?h=capabilitiesandservices

Glass has assumed a significant job in our general public. The things that we use at home, the parts that we see on vehicles and different vehicles, advantages of forging and the materials that make up numerous kinds of machines and gadgets use glass to upgrade their functionalities. These days, there are numerous organizations that produce glass, similar to Forge Glass, and every one of them intend to make superb and tough products.