All hail the man who makes the bangs 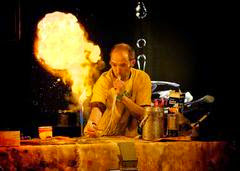 The nerd with the safety specs who is always cropping up on TV doing crazy experiments for Jim Al-Khalili or Mark Miodownik or Michael Mosley, while threatening to upstage them with his patter? That’s Andrea Sella of UCL, who has just been awarded the Michael Faraday Prize by the Royal Society. And this is a very splendid thing. With previous recipients including Peter Medawar, Richard Dawkins, David Attenborough, Robert Winston and Brian Cox, it is clear what a prestigious award this is. But whereas those folks have on the whole found themselves celebrated and supported for their science-communication work, Andrea has sometimes been under a lot of pressure to justify doing this stuff instead of concentrating on his research (on lanthanides). I hope very much that this recognition will help to underline the value of what we now call “outreach activities” when conducted by people in regular research positions, rather than just by those who have managed to establish science communication as a central component of their work. Being able to talk about science (and in Andrea’s case, show it in spectacular fashion) is a rare skill, the challenge of which is sometimes under-estimated and under-valued, and so it is very heartening to see it recognized here.
Posted by Philip Ball at 3:42 AM