On the side of the angels 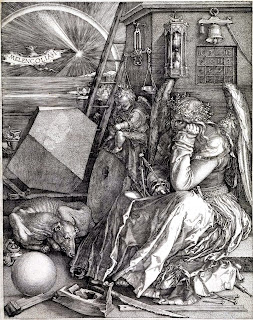 Here’s my take on Dürer’s Melencolia I on its 500th anniversary, published in Nature this week.

Albrecht Dürer’s engraving Melencholia I, produced 500 years ago, seems an open invitation to the cryptologist. Packed with occult symbolism from alchemy, astrology, mathematics and medicine, it promises hidden messages and recondite meanings. What it really tells us, however, is that Dürer was a philosopher-artist of the same stamp as Leonardo da Vinci, immersed in the intellectual currents of his time. In the words of art historian John Gage, Melencolia I is “almost an anthology of alchemical ideas about the structure of matter and the role of time” [1].

Dürer’s brooding angel is surrounded by, the instruments of the proto-scientist: a balance, an hourglass, measuring calipers, a crucible on a blazing fire. Here too is numerological symbolism in the “magic square” of the integers 1-16, the rows, columns and main diagonals of which all add up to 34: a common emblem of both folk and philosophical magic. Here is the astrological portent of a comet, streaming across a sky in which an improbable rainbow arches, a symbol of the colour-changing processes of the alchemical route to the philosopher’s stone. And here is the title itself: melancholy, associated in ancient medicine with black bile, the same colour of the material with which the alchemist’s Great Work to make gold was supposed to begin.

But why the tools of the craftsman – the woodworking implements in the foreground, the polygonal block of stone awaiting the sculptor’s hammer and chisel? Why the tormented, introspective eyes of the androgynous angel?

Melencolia I is part of a trio of complex etchings on copper plate that Dürer made in 1513-14. Known as the Master Engravings, they are considered collectively to raise this new art to an unprecedented standard of technical skill and psychological depth. This cluttered, virtuosic image is widely thought often said to represent a portrait of Dürer’s own artistic spirit. Melancholy, often considered the least desirable of the four classical humours then believed to govern health and medicine, was traditionally associated with insanity. But during the Renaissance it was ‘reinvented’ as the humour of the artistic temperament, originating the link popularly asserted between madness and creative genius. The German physician and writer Cornelius Agrippa, whose influential Occult Philosophy (widely circulated in manuscript form from 1510) Dürer is almost certain to have read, claimed that “celestial spirits” were apt to possess the melancholy man and imbue him with the imagination required of an “excellent painter”. For it took imagination to be an image-maker – but also to be a magician.

The connection to Agrippa was first made by the art historian Erwin Panofsky, a doyen of symbolism in art, in 1943. He argued that what leaves Dürer’s art-angel so vexed is the artist’s constant sense of failure: an inability to fly, to exceed the bounds of the human imagination and create the truly wondrous. Her tools, in consequence, lie abandoned. Why astronomy, geometry, meteorology and chemistry should have any relation to the artistic temperament is not obvious today, but in the early sixteenth century the connection would have been taken for granted by anyone familiar with the Neoplatonic idea of correspondences in nature. This notion, which pervades Agrippa’s writing, held that, which joined all natural phenomena, including the predispositions of humankind, are joined into a web of hidden forces and symbols. Melancholy, for instance, is the humour governed by the planet Saturn, whence “saturnine.” That blend of ideas was still present in Robert Burton’s The Anatomy of Melancholy, published a century later, which called melancholics “dull, sad, sour, lumpish, ill-disposed, solitary, any way moved, or displeased.” A harsh description perhaps, but Burton reminds us that “from these melancholy dispositions no man living is free” – for melancholy is in the end “the character of Mortality.” But some are more prone than others: Agrippa reminded his readers of Aristotle’s opinion “that all men that were excellent in any Science, were for the most part melancholy.”

So there would have been nothing obscure about this picture for its intended audience of intellectual connoisseurs. It was precisely because Dürer mastered and exploited the new technologies of printmaking that he could distribute these works widely, and he indicated in his diaries that he sold many on his travels, as well as giving others as gifts to friends and humanist scholars such as Erasmus of Rotterdam. Unlike paintings, you needed only moderate wealth to afford a print. Ferdinand Columbus, son of Christopher, collected over 3,000, 390 of which were by Dürer and his workshop [2].

But even if the alchemical imagery of Melencolia I was part of the ‘occult parcel’ that this engraving presents, Besides all this, it would be wrong to imagine that alchemy was, to Dürer and his contemporaries, purely an esoteric art associated with gold-making. As Lawrence Principe has recently argued (The Secrets of Alchemy, University of Chicago Press, 2013), this precursor to chemistry was not just or even primarily about furtive and futile experimentation to make gold from base metals. It was also a practical craft, not least in providing artists with their pigments. For this reason, artists commonly knew something of its techniques; Dürer’s friend, the German artist Lucas Cranach the Elder, was a pharmacist on the side, which may explain why he was almost unique in Northern Europe in using the rare and poisonous yellow pigment orpiment, an arsenic sulphide. The extent of Dürer’s chemical knowledge is not known, but he was one of the first artists to use acids for etching metal, a technique developed only at the start of the sixteenth century. The process required specialist knowledge: it typically used nitric acid, made from saltpetre, alum and ferrous sulphate, mixed with dilute hydrochloric acid and potassium chlorate (“Dutch mordant”).

Humility should perhaps compel us to concur with art historian Keith Moxey that “the significance of Melencolia I is ultimately and necessarily beyond our capacity to define” [3] – we are too removed from it now for its themes to resonate. But what surely endures in this image is a reminder that for the Renaissance artist there was continuity between theories about the world, matter and human nature, the practical skills of the artisan, and the business of making art.