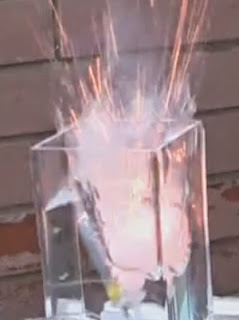 Here’s the longer version of my latest news story for Nature. I love this stuff. I saw the experiments being done by Phil M when I visited Pavel a couple of years ago, and have been waiting for the work to come together ever since. Could you possibly need any more evidence that chemistry rocks?

There’s more than exploding hydrogen in the violence of the reaction of alkali metals with water.

It’s the classic piece of chemical tomfoolery: take a lump of sodium or potassium metal, toss it into water, and watch the explosion. Yet a paper in Nature Chemistry reveals that this familiar piece of pyrotechnics has not previously been understood [1].

The explosion, say Pavel Jungwirth and his collaborators at the Czech Academy of Sciences in Prague, is not merely a consequence of the ignition of the hydrogen gas that the alkali metals release from water. That may happen eventually, but it begins as something far stranger: a rapid exodus of electrons followed by explosion of the metal driven by electrical repulsion.

Neurologist and chemical enthusiast Oliver Sacks offers a vivid account of how, as a boy, he and his friends carried out the reaction on Highgate Ponds in North London with a lump of sodium bought from the local chemicals supplier [2]: “It took fire instantly and sped around and around on the surface like a demented meteor, with a huge sheet of yellow flame above it. We all exulted – this was chemistry with a vengeance.”

Highly reactive sodium and potassium react with water to form sodium hydroxide and hydrogen, and the reaction liberates so much heat that the hydrogen may ignite spontaneously. The process seems so straightforward and understandable that no one previously seems to have felt there was anything else to explain.

But as Jungwirth says, there is a fundamental problem with the conventional explanation. “In order to have a runaway explosive behaviour of a chemical reaction, very good mixing of the reactants needs to be ensured,” he says. But the hydrogen gas and steam released at the surface of the metal should impede the further access of water and quench the reaction. Why doesn’t it?

This, Jungwirth admits, was only a part of the original motivation for looking more deeply into the reaction. The experiments were conducted by his colleague Philip Mason, and he says that “an equally important part is Phil's love for exciting experimentation and the easy availability of our balcony, where the first experiments were carried out.” There Mason set up a high-speed video camera to film the process, although the final movies were shot in the lab of coauthor Sigurd Bauerecker at the Technical University of Braunschweig in Germany.

Despite its notoriously explosive nature, the reaction of sodium with water is in fact extremely erratic: sometimes it explodes and sometimes it doesn’t, largely because of surface oxidation of the metal. “The basic trick Phil came up with is to use liquid metal – a sodium/potassium alloy that is liquid at room temperature”, says Jungwirth. But getting a reliable explosion has its hazards. “A face shield is a must”, he adds. “Phil took it off once to blow out a small fire and a tiny piece of metal exploded into his face: luckily lower part of it, so he only had a few scratches on his cheek.”

The movies revealed a vital clue to what was fueling the violent reaction in the early stages. The reaction starts less than a millisecond after the metal droplet, released from a syringe, enters the water. After just 0.4 ms, “spikes” of metal shoot out from the droplet, too fast to be expelled by heating.

What’s more, between 0.3 and 0.5 ms, this “spiking” droplet becomes surrounded by a dark blue/purple colour in the solution. The reason for these two observations became clear when Jungwirth’s postgraduate student Frank Uhlig carried out quantum-mechanical computer simulations of the process with clusters of just 19 sodium atoms. He found that each of the atoms at the surface of the cluster loses an electron within just several picoseconds (10^-12 s), and these electrons enter the surrounding water where they are solvated (surrounded by water molecules)[3].

Solvated electrons in water are known to have the deep blue colour observed transiently in the videos – although they are highly reactive, quickly decomposing water to hydrogen gas and hydroxide ions. What’s more, their departure leaves the metal cluster full of positively charged ions, which repel each other. The result is a “Coulomb explosion” in which the cluster bursts apart due to its own electrostatic repulsion, a process first explained by Lord Rayleigh in the late nineteenth century.

This explosion creates the spikes known as Taylor cones, the researchers say. They support that idea with less detailed simulations involving clusters of 4,000 sodium atoms, which also break up with spike-like instabilities at the surface.

“Four thousand sodium atoms is still a very tiny piece of matter, and I do not think we see proper Taylor cones in the simulations”, says Jungwirth. “At best, we see a microscopic version.”

Inorganic chemist James Dye of Michigan State University, a specialist on solvated electrons, is full of praise for the work. “I have done the demonstration dozens of times and wondered why sodium globules often danced on the surface, while potassium leads to explosive behaviour”, he says. “The paper gives a complete and interesting account of the early stages of the reaction.”