There goes the neighbourhood 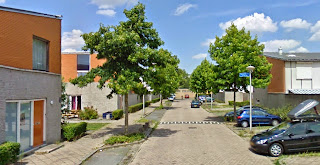 How would you like to live on Heinrich Himmlerstraat? Maybe not? Don’t worry – to my knowledge no street named after the SS Reichsführer exists. But if you do fancy living on a street dedicated to an ardent Nazi, the one pictured above will do you: it is Lenardstraat in Nijmegen. A Google search for this location will take you to the Nijmegen city website, where we’re told that “Philipp Lenard was a German physicist, and received the 1905 Nobel Prize in physics for his research on cathode rays and their properties.” Sounds worthy enough, huh? They forgot to mention that Lenard was also a fervent supporter of the Nazis who hosted Hitler in his home after the Führer-to-be was released from a Bavarian prison following the failed Beer Hall Putsch of 1923. Lenard was one of the main progenitors of “Aryan physics”, which he proclaimed as the only true physics, in distinction from the pernicious “Jewish physics” promulgated by Einstein and his acolytes. In 1924 Lenard and his associate Johannes Stark published an article called “The Hitler spirit and science”, in which they said that Hitler and his comrades “appear to us as God’s gifts from times of old when races were purer, people were greater, and minds were less deluded.” According to Lenard, all of the great scientists of former times (including Galileo!) were of Nordic-Aryan stock.

Should we hold all this against Lenard the physicist? Well, certainly it does not invalidate his important work on cathode rays and the photoelectric effect, any more than Stark’s adulation of Hitler should prevent us from recognizing his discovery of the Stark effect (which won him a Nobel too). But acknowledging scientific achievement and precedence is one thing; celebrating committed Nazis and anti-Semites by naming streets after them is another. (The University of Heidelberg quietly ditched the Philipp Lenard Institute – which once boasted of being “Jew-free” – after his death.)

You might think that the matter would be especially sensitive in the Netherlands, which suffered so greatly under the Nazis. Yet the Dutch academic who pointed out this road to me tells me that his efforts to raise the issue have got nowhere. “After seeking support from Dutch historians of science and sending a copy of my letter to the local press”, he says, “I received a letter from the mayor that a name change will not be considered since 80% of the street inhabitants resisted a change and nowadays nobody knows who he was.”

Well, this is who Lenard was: one of the most unpleasant of the distinguished scientists of the twentieth century. It’s of course a valid and difficult question at what stage (if ever) we draw a veil over the dubious character of a historical figure and simply recognize their achievements. But given the furious debate that still rages today in the Netherlands over how to think about wartime conduct, memories in this case seem disturbingly short. 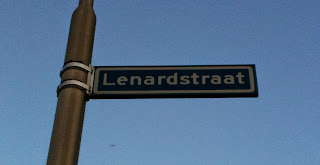 "at what stage (if ever) we draw a veil over the dubious character of a historical figure and simply recognize their achievements."

It's obviously very hard to draw that line. But, I am among those who are only interested in those scientists' contribution to science. So, I try to stay away from their personal lives and sometimes incredibly "wrong" or evil acts. Otherwise, it is almost impossible to find an "ideal" or "perfect" man or scientist.

I was just reading this article :

I learned that Lenard's photo (in addition to F.Haber's) is hanging upside down on the wall of a salon right across Wroclaw University.

Thanks for such superb info; this in actual fact comes in handy. agen bola