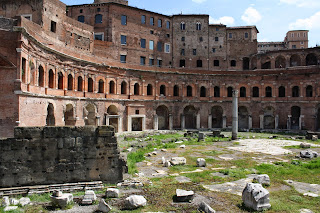 Calling it the world’s earliest shopping mall is perhaps a qualified accolade, but Trajan’s Market in Rome is certainly a remarkable structure. These vaulted arcades, built early in the second century AD and perhaps originally administrative offices, have withstood almost two millennia of moderate-scale earthquakes. They aren’t alone in that: the Pantheon, Hadrian’s Mausoleum and the Baths of Diocletian in Rome have all shown comparable longevity and resilience. What is their secret?

The structures use concrete made from the pyroclastic volcanic rock of the region: coarse rubble of tuff and brick bound with a mortar made from volcanic ash. It is this mortar that provides structural stability, but the properties that give it such durability have only now been examined. Jackson et al. [Proc. Natl Acad. Sci. USA 111, 18484 (2014) – here] have reproduced the mortar used by Roman builders and used microdiffraction and tomography to study how it acquires its remarkable cohesion.

The Roman mortar was the result of a century or more of experimentation. It used pozzolan, an aluminosilicate volcanic pumice found in the region of the town of Pozzuoli, near Naples, which, when mixed with slaked lime (calcium hydroxide) in the presence of moisture, recrystallizes into a hydrated cementitious material. Although named for its Roman use, pozzolan has a much longer history in building and remained in use until the introduction of Portland cements in the eighteenth century.

The production of the volcanic ash–lime cement was described by the Roman engineer Vitruvius in his book an architecture from the first century BC, and Jackson et al. followed his recipe to make modern analogues. They found that the tensile strength and fracture energy increased steadily over several months, and used electron microscopy and synchrotron X-ray diffraction to look at the fracture surfaces and the chemical nature of the cementitious phases. Among the poorly crystalline matrix are platey crystals of a calcium aluminosilicate phase called strätinglite, crystallized in situ, which seem to act rather like the steel or glass microfibres added to some cements today to toughen them by providing obstacles to crack propagation. Unlike them, however, strätlingite resists corrosion.

Since the cement industry is a major producer of carbon dioxide liberated during the production of Portland cement, there is considerable interest in finding environmentally friendly alternatives. Some of these have a binding matrix of similar composition to the Roman mortar, and so Jackson et al. suggest that an improved understanding of what makes it so durable could point to approaches worth adopting today – such as using chemical additives that promote the intergrowth of reinforcing platelets.

Of course, the Roman engineers knew of the superior properties of their mortar only by experience. A similar combination of astute empiricism and good fortune lies behind the medieval lime mortars that, because of their slow setting, have preserved some churches and other buildings in the face of structural shifting. They tempt us to celebrate the skills of ancient artisans, but we should also remember that what we see today is selective: time has already levelled the failures.
Posted by Philip Ball at 9:39 AM