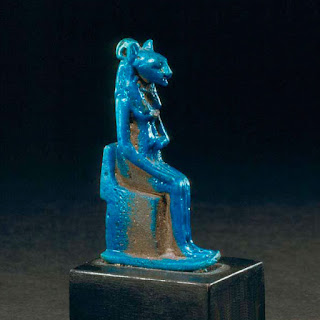 Here’s my latest piece for BBC Future. And this seems an opportune place to advertise Jo Marchant’s latest book The Shadow King (Da Capo), on Tutankhamun’s mummy. It looks set to be covering some fascinating material, and is published at the end of June.

In the absence of anything like real science to guide them, most useful technologies in the ancient world were probably discovered by chance. But that doesn’t seem to bode well for understanding how, when and where these often transformative discoveries took place. Can we ever hope to know how, say, the Stone Age became the Bronze Age became the Iron Age?

Modern archaeologists are an optimistic and inventive lot, however. They figure that, even if the details are buried in the sands of time, we can make some good guesses by trying to reconstruct what the ancients were capable of, using the techniques and materials of the time. Researchers have, for example, built copies of ancient iron- and glass-making furnaces to figure out whether descriptions and recipes from those times really work.

One of the latest efforts in this field of experimental archaeology now proposes that the production of glazed stones and ceramics – an innovation that profoundly affected trade across the globe – could have been made possible by the natural saltiness of cow dung: a property that makes it the vital ingredient in a recipe assembled by serendipity.

The earliest glazes, dating from the late fifth millennium BC and found in the Near East, Egypt and the Indus Valley, were used for coating natural stones made from minerals such as quartz and soapstone (talc). As the technology advanced, the stones were often exquisitely carved before being coated with a blue copper-based glaze to make objects now known as faience. By the second millennium BC Egyptian faience was being traded throughout Europe.

Because these copper glazes appear during the so-called Chalcolithic period – the ‘Copper Age’ that preceded the Bronze Age – it has been long thought that they were discovered as an offshoot of the smelting of copper ores such as malachite to make the metal. The glazes are forms of copper silicate, made as copper combines with the silicate minerals in the high temperature of a kiln. These compounds can range from green (like malachite itself, a kind of copper carbonate) through turquoise to rich blue, depending on how much salt (more specifically, how much chloride) is incorporated into the mix: the more of it, the greener the glaze.

Sometimes these copper glazes are crystalline, with regularly ordered arrays of atoms. But they can also be glassy, meaning that the atoms are rather disordered. In fact, it seems likely that copper smelting stimulated not only glazing but the production of glass itself, as well as the pigment known as Egyptian blue, which is a ground-up copper silicate glass. In other words, a whole cluster of valuable technologies might share a common root in the making of copper metal.

The basic idea, put forward by Egyptologists such as the Englishman William Flinders Petrie in the early twentieth century, was that other materials might have found their way by accident into copper-smelting kilns and been transformed in the heat. Glass, for instance, is little more than melted sand (mostly fine-grained quartz). To melt pure sand requires temperatures higher than ancient kilns could achieve, but the melting point is lowered if there is some alkaline substance present. This could have been provided by wood ash, although some later recipes in the Middle East used the mineral natron (sodium carbonate).

How exactly might a blue glaze have been made this way? Another early Egyptologist, Alfred Lucas, who worked with Howard Carter, proposed that perhaps a piece of quartz used to grind up malachite to make eye-paint found its way into a kiln, where the heat and alkali could have converted residues of the copper mineral into a blue film. But that would make the discovery independent of copper manufacture itself, and it’s not obvious how a grinding stone could slip into a kiln. Yet why else should a copper compound come to be on the surface of a lump of quartz?

Last year, Mehran Matin and his daughter Moujan Matin, working in the research laboratory of the Shex Porcelain Company in Saveh, Iran, showed that these materials didn’t need to be in physical contact at all [M. Matin & M. Matin, J. Archaeological Science 39, 763 (2012)]. A copper compound such as copper scale – the corrosion product of copper metal, typically containing copper hydroxide – can be vaporized in a kiln and then, in the presence of vaporized alkali oxides, be deposited on the surface of a silicate such as quartz to form a bluish glaze. All that would require is for a bit of quartz, an ubiquitous mineral in the Middle East, to have been lying around in a copper-smelting kiln.

Or does it? To get the rich turquoise blue, you also need other ingredients, such as salt. So Moujan Matin, now at the Department of Archaeology and Art History at the University of Oxford in England, has undertaken a series of experiments with different mixtures to see if she can reproduce the shiny blue appearance of the earliest blue-glazed stones. She used a modern kiln fired up to the kind of temperatures ancient kilns could generate – between 850 and 980 oC – in which lumps of quartz were placed on a pedestal above a glazing mixture made from copper scale and other ingredients.

Rock salt (sodium chloride) was known in the ancient world, since there are deposits around the Mediterranean and in the Middle East. Matin found that copper scale and rock salt alone covered the quartz surface with a rather pale, greenish, dull and rough coating: not at all like ancient blue glaze. An extra ingredient – calcium carbonate, or common chalk, which the Egyptians used as a white pigment among other things – made all the difference, producing a rich, shiny turquoise-blue glaze above 950 oC.

That looked good – but it forces one to assume that salt, chalk and quartz all somehow got into the kiln along with the copper scale. It’s not impossible, but as Matin points out, such accidents probably had to happen several times before anyone took much notice. However, there’s no need for the least likely of these ingredients, rock salt. Matin reasoned that dried cattle dung, which contains significant amounts of both alkalis and salt (chloride), was widely used as a fuel since the beginnings of animal domestication in the eighth millennium BC. So she tried another mixture: copper scale, calcium carbonate and the ash of burnt cattle dung. This too produced a nice, shiny (albeit slightly paler) blue glaze.

Of course, there’s nothing that proves this was the way glazing began. But it supplies a story that is entirely plausible, and narrows the options for what will and won’t do the job.