I have a piece in the July issue of Prospect on DNA nanotechnology. This is the pre-edited version.

“It has not escaped our notice that the specific pairing we have postulated immediately suggests a possible copying mechanism for the genetic material”. The arch remark that concluded James Watson and Francis Crick’s paper in Nature on the structure of DNA, published 60 years ago, anticipated the entire basis of modern genetics. The structure they postulated is both iconic and beautiful: two strands of conjoined molecular building bocks, entwined in a double helix. The twin strands are zipped together by chemical bonds that rely on a perfect, ‘complementary’ match between their sequences of building blocks, and these sequences encode genetic information that is passed on when the molecule is replicated.

Yet although Watson and Crick were undoubtedly right to depict DNA as a kind of replicating molecular data base, the beautiful elegance of their vision of genetics – and in a sense, of the whole of biology and evolution – as the read-out of a set of digital instructions on DNA, basically using chemistry for computation, is now looking too simplistic, even misleading. It is no longer clear that DNA is the ultimate focus of all molecular processes controlling the development and evolution of organisms: it is an essential but incomplete database, more an aide-memoire than a blueprint. Watson and Crick’s picture of a molecule that can be programmed to zip up only with the right partner is finding expression in its purest and most satisfying form not in biology – which is always messier than we imagine – but in the field of nanotechnology, which is concerned with engineering matter at the scale of nanometres (millionths of a millimetre) – the dimensions of molecules.

A key motivation for nanotechnology is the miniaturization of transistors and other devices in microelectronic circuitry: they are now so small that conventional methods of carving and shaping materials are stretched to the limits of their finesse. To replace such ‘top-down’ fabrication with ‘bottom-up’, nanotechnologists need to be able to control exactly how atoms and molecules stick together, and perhaps to dictate their movements.

DNA might be the answer. Chemists have now created molecular machines from bespoke pieces of DNA that can move and walk along surfaces. They have made molecular-sized cubes and meshes, and have figured out how to persuade DNA strands to fold up into almost any shape imaginable, including Chinese characters and maps of the world smaller than a single virus. They are devising DNA computers that solve problems mechanically, not unlike an abacus, by the patching together of little ‘sticky’ tiles. They are using DNA tagging to hitch other molecules and tiny particles into unions that would otherwise be extremely difficult to arrange, enabling the chemical synthesis of new materials and devices. In short, they are finding DNA to be the ideal nanotechnological construction material, limitlessly malleable and capable of being programmed to assemble itself into structures with a precision and complexity otherwise unattainable.

Although this research places DNA in roles quite unlike those it occupies in living cells, it all comes from direct application of Watson and Crick’s insight. A single strand of DNA is composed of four types of molecule, strung together like beads on a thread. Each building block contains a unit called a base which dangles from the backbone. There are four kinds of base, whose chemical names are shortened to the labels A, T, C and G. The bases can stick to one another, but in the double helix they tolerate only one kind of partner: A pairs with T, and C with G. This means that the sequence of bases on one strand exactly complements that on the other, and the pairs of bases provide the zip that holds the strands together.

So a DNA strand will only pair up securely with another if their base sequences are complementary. If there are mismatches of bases along the double helix, the resulting bulges or distortions make the double strand prone to falling apart. This pickiness about base-pairing means that a DNA strand can find the right partner from a mixture containing many different sequences.

Chemical methods for making artificial DNA, first developed in the 1970s, have now reached the point at which strands containing millions of A, T, G and C bases can be assembled in any sequence you want. These techniques, developed for genetic engineering and biotechnology, are now used by nanotechnologists to create DNA strands designed to assemble themselves into exotic shapes.

The potential of the approach was demonstrated in the early 1990s by chemist Nadrian Seeman of New York University and his collaborators. They created DNA strands designed such that, when they are mixed together, they twist around one another not in a single helical coil but to make the struts of tiny, cube-shaped cages. No one had any particular use for a DNA cube; Seeman was demonstrating a proof of principle, showing that a molecular shape that would be extremely hard to fashion using conventional chemistry could be engineered by figuring out how to program the components to lace themselves together spontaneously. 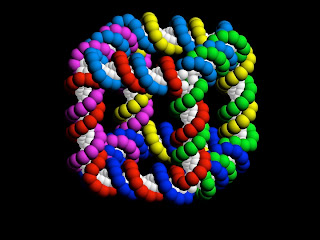 Although regarded for some years as little more than a clever curiosity, Seeman’s work was visionary. It showed a way to tackle nanotechnology’s challenge of building very small objects from the bottom up, starting with individual atoms and molecules. If DNA is the construction fabric, the base sequence can provide the assembly instructions: unlike most molecules, DNA will do what it is told.

DNA origami could, for instance, provide scaffolding on which electronic components are arranged. One might tag the components with strands that pair up with a particular location on a DNA scaffold with the complementary sequence: in effect, an instruction saying “stick here”. Researchers have worked out how to program DNA strands to weave themselves into webs and grids, like a chicken-wire mesh, on which other molecules or objects can be precisely attached. Last February a team at Marshall University in West Virginia showed that giant molecules called carbon nanotubes – nanometre-scale tubes of carbon which conduct electricity and have been proposed as ultrasmall electronic devices – can be arranged in evenly spaced, parallel pairs along a ribbon made by DNA origami. The carbon nanotubes were wrapped with single-stranded DNA, which lashed them onto the ribbon at the designated sites.

The same approach of DNA tagging could be used to assemble complicated polymers (long chains of linked-up molecules) and other complex molecules piece by piece, much as, in living cells, DNA’s cousin RNA uses genetically encoded information to direct the formation of protein molecules, tagging and assembling the amino-acid building blocks in the right order.

The astonishing versatility of DNA origami was revealed in 2006 when Paul Rothemund at the California Institute of Technology in Pasadena unveiled a new scheme for determining the way it folds. His approach was to make single strands programmed to stick to itself in back-and-forth hairpin-like turns that create a two-dimensional shape, pinning the folds in place with ‘staples’ made from short DNA strands with appropriate complementary sequences. 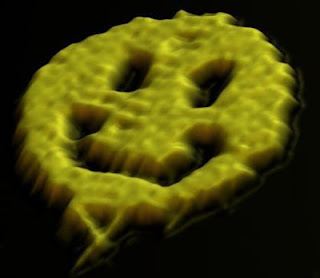 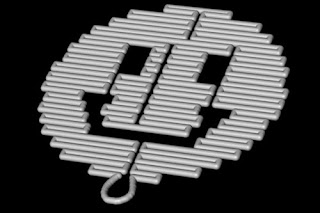 Rothemund developed a computer algorithm that could work out the sequence and stapling needed to define any folding pattern, and showed experimental examples ranging from smiley faces and stars to a map of the world about a hundred nanometres across (a scale of 1:200,000,000,000,000). These complex shapes could take several days to fold up properly, allowing all kinks and mistakes to be ironed out, but researchers in Germany reported last December that each shape has an optimal folding temperature (typically around 50-60 oC) at which folding takes just a few minutes – a speed-up that could be vital for applications. 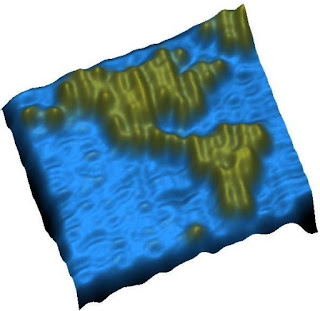 Last March, Hao Yan of the University of Arizona took the complexity of DNA origami to a new level. He showed how the design principles pioneered by Seeman and Rothemund can be tweaked to make curved shapes in two and three dimensions, such as hollow spheres just tens of nanometres wide. Meanwhile, in 2009 a Danish team saw a way to put DNA cubes to use: they made larger versions than Seeman’s, about 30 nanometres across, with lids that could be opened an closed with a ‘gene key’ – a potential way to store drug molecules until an appropriate genetic signal releases them for action. 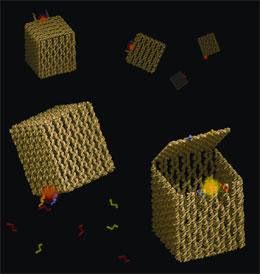 As aficionados of Lego and Meccano know, once you have a construction kit the temptation is irresistible to give it moving parts: to add motors. Molecular-scale motors are well-known in biology: they make muscles contract and allow bacteria to swim. These biological motors are made of protein, but researchers have figured out how to produce controlled movement in artificial DNA assemblies too. One approach, championed by Bernie Yurke of Bell Laboratories in New Jersey and Andrew Turberfield at the University of Oxford, is to make a DNA ‘pincer’ that closes when ‘fueled’ with a complementary strand that sticks to the arms and pulls them together. A second ‘fuel strand’ strips away the first and opens the arms wide again. Using similar principles, Turberfield and Seeman have made two-legged ‘DNA walkers’ that stride step by step along DNA tracks, while a ‘DNA robot’ devised by Turberfield and colleagues can negotiate a particular path through a network of such tracks, directed by fuel strands that prompt a right- or left-hand turn at branching points.

They and others are working out how to implement the principles of DNA self-assembly to do computing. For example, pieces of folded-up DNA representing binary 1’s and 0’s can be programmed to stick together like arrays of tiles to encode information, and can be shuffled around to carry out calculations – a sort of mechanical, abacus-like computer at the molecular scale.

Underlying all this work is Watson and Crick’s comment about DNA replication. There is the tantalizing – some might say scary – possibility that DNA structures and machines could be programmed not only to self-assemble but to copy themselves. It’s not outrageous to imagine at least some products of DNA nanotechnology acquiring this life-like ability to reproduce, and perhaps to mutate into better forms. Right now such speculations recede rapidly into science fiction – but then, no one guessed 60 years ago where the secrets of DNA self-assembly would take us today.
Posted by Philip Ball at 1:31 PM

Very well explained. I would like to say that it is very interesting to read your blog.