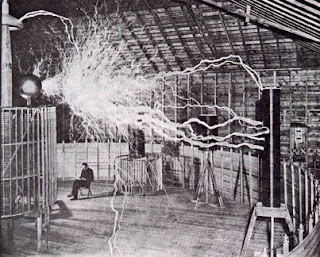 I have reviewed a new biography of Nikola Tesla in the Wall Street Journal. The review is available online, but I don’t know how long it will stay there, so here it is anyway.

When Christopher Nolan cast David Bowie as the Serbian inventor Nikola Tesla in his 2006 movie The Prestige, he chose wisely. Despite Bowie’s dodgy moustache (and dodgier accent), few other actors could have supplied the otherworldliness that the role demands: a combination of RadioShack nerd and space alien. Strikingly handsome, Tesla was a celebrity and socialite in the final decades of the 19th century before disappearing into bankruptcy and then legend.

At one time Thomas Edison’s employee, Tesla (1856-1943) became his rival, vying for the crown of Electrical Wizard. Legends still cling to him—that he discovered how to tap cosmic energy, that his plans for death rays were hidden by the U.S. government. As W. Bernard Carlson, a historian of technology at the University of Virginia, points out in his biography Tesla, he has been credited with every innovation of the electronic age and dismissed as a madman. The classic photograph of Tesla seated calmly reading a book in his Colorado laboratory while an electrical storm rages across the gigantic coils around him captures brilliantly the sense of a magus commanding wild forces. In fact, it is his image that he commands here: The photo was a faked double exposure.

But if it’s the legendary Tesla you seek, you’ll be disappointed — Mr. Carlson does a good job of debunking the New Agers and conspiracy theorists. Instead you will have to negotiate rather opaque discourses on the merits of alternating-current (AC) versus direct-current (DC) power generation. This is both a strength and a weakness of the book.

Tesla was born in the province of Lika in what is now Croatia but was then a Serbian region on the outskirts of the Austro-Hungarian Empire. The son of an educated but austere priest, he was trying to make flying machines while still at school and was seemingly never destined, as his father hoped, for the priesthood himself. During a rather haphazard training as an engineer in Graz and Prague, Tesla developed a fascination for motors, dynamos and electromagnetism in general. While working in Budapest he was hired by Edison’s branch in Paris and then brought to the Edison Machine Works in New York. “This is a damn good man,” Edison is said to have remarked when they met in 1884, but Tesla quit soon after when he felt that his contribution to the company’s arc-lighting system went unappreciated.

His breakthrough invention was a motor that ran off AC. It was simpler and without the sparking contacts of DC motors. He sold the patent to George Westinghouse, who collaborated with him to develop AC power - easier to transmit over long distances - in America. The construction of Westinghouse’s AC hydroelectric power plant at Niagara Falls in 1895 was arguably Tesla’s greatest and most enduring success. As Mr. Carlson explains: “Tesla’s AC inventions were essential to making electricity a service that could be mass-produced and mass-distributed; his inventions set the stage for the ways in which we produce and consume electricity today.”

Like Edison, Tesla was a showman who actively cultivated an impression of wizardry in an age when electromagnetic phenomena still smelled of magic—an association that probably contributed more to Tesla’s status than Mr. Carlson credits. To demonstrate the safety of AC power, he staged public lectures in which he would pass 250,000 volts through his body, creating a glow of ionized air at his fingertips and the ends of his hairs. Despite being prone to depression and odd behavior, he was also, in his heyday, a socialite who could win over tycoons such as Westinghouse, John Jacob Astor and J.P. Morgan.

So Tesla was ingenious—but was he a genius? Like other great inventors of his age, such as Edison, Bell and Ford, he brimmed with imaginative, sometimes bizarre, plans, supported by obsessive determination and only a cursory understanding of the basic science. He hatched grand schemes that were visionary and unrealistic in equal measure. His desire to transfer electrical power wirelessly has become relevant again in the age of the laptop and cellphone. But dreamers are prone to myopia, and he missed opportunities. He believed that “wireless telegraphy” would have to transmit electromagnetic signals through the earth rather than the atmosphere, and so he lost out to Marconi, breaking both his spirit and his financial backing. He missed a chance to discover X-rays, overlooking those produced by his gas-discharge lighting tubes, and he found no takers for his remote-controlled vehicles.

Yet what dreams he had! As he promises to communicate with Martians by radio or to use electricity to convert atmospheric nitrogen into fertilizer (the chemical method Fritz Haber devised a decade later supports the world’s current population), you have to admire his chutzpah. At his experimental station in Colorado Springs, he wirelessly lighted up distant electric bulbs planted in the desert soil and generated ball lightning in a laboratory that surely inspired the film director James Whale’s electrified Frankenstein. He persuaded Morgan to finance another lab at Wardenclyffe on Long Island, complete with a 600-foot radio transmission tower—which never worked, turning their relationship sour and precipitating Tesla’s slow decline into obscurity.

Mr. Carlson’s account is thorough, but flawed by its lack of psychological insight. Tesla was evidently a strange and troubled man. “I calculated the cubical contents of soup plates, coffee cups and pieces of food,” he wrote in a memoir—“otherwise the meal was unenjoyable.” When he reports that dropping little squares of paper into a dish of liquid made him “always sense a peculiar and awful taste in my mouth,” Mr. Carlson doesn’t wonder why he might be engaged in that activity in the first place. He seems to regard these peculiar habits as inconveniences, noting with unintentional deadpan that “they undoubtedly interfered with his relationships with other people.” Mr. Carlson’s view of inner worlds sounds at times almost Victorian: As a boy, he says, Tesla overcame recurrent nightmares “by developing his willpower.”

Most perplexingly, Mr. Carlson does not examine Tesla’s belief that “I was but an automaton devoid of free will in thought and action” except to cite it as motivating his interest in building radio-controlled robotic devices. By the time Mr. Carlson steels himself to talk about sex, we have already deduced that Tesla was sexually repressed and probably gay. Mr. Carlson touches on Tesla’s possible homosexuality but is content to attribute his apparent celibacy to the asceticism of his Eastern Orthodox background and the solitary demands of inventive genius. The author’s relief in getting back to a discussion of inductance coils is almost palpable.

This is a shame, because Mr. Carlson has some interesting things to say about technological innovation, such as the need to blend imagination and analytical rigor—to “think hard but dream boldly”—and the delicate relationship between inventors and investors. But the omissions are important for that very reason. While one shouldn’t pathologize Tesla too much, his idiosyncrasies raise questions about the extent to which one can generalize from his approach to invention—or even how much of it, as reported by Tesla himself, can be taken at face value. Without a deeper insight into the man, it becomes hard to draw any lessons about the process of invention and innovation in history. For that, the mathematician Norbert Wiener’s little treatise Invention, written in 1954, is still hard to beat. In the meantime, this book provides a good survey of Tesla’s technics, but the man remains an enigma.
Posted by Philip Ball at 4:46 PM