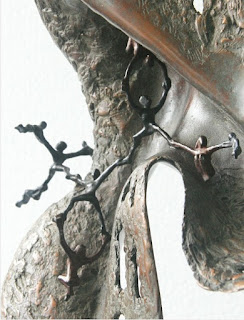 I’ve written the catalogue notes for an exhibition that has just opened at the Pangolin Gallery in the King’s Place, King’s Cross, London. It is well worth a visit (and if any Nature folks are reading this, you have no excuse – it’s next door).

Artists have drawn on themes and concepts in science at least since Leonardo da Vinci blended both art and science in a unified representation of the natural world. In the twentieth century an interest in form, space, growth and motion was shared by artists such as Picasso, Duchamp and Richard Hamilton and scientists including Einstein, D’Arcy Thompson and Roger Penrose. Today’s collaborations and interactions of artists and scientists are often motivated by the emergence of neuroscience and the concomitant exploration of how we perceive the world.

It’s rare to find at this fecund interface any engagement with the chemical and molecular sciences, which are commonly regarded as simultaneously too abstruse (all those ball-and-stick molecules) and too applied (all those stinking flasks and vats) to have much to say about aesthetic experience. Chemistry might seem to offer no grand ideas about the universe and our place within it, but just atoms, crystals, solvents: inert materiality.

Yet that’s not how insiders see it. Chemistry is unique among the fundamental sciences in its reliance on creativity – literally, it is about making stuff. That demands of the creator both something worth saying and the skill and imagination needed to convey it. “Chemistry, like much of art, and arguably unlike the other sciences, is oriented towards transformation, process and the dichotomy between the synthetic and the natural”, says American chemist Tami Spector. “It is also, like art, highly tactile in its experimental and laboratory aspects, yet subtly conceptual in its representations.”

Briony Marshall is such an insider: an exceedingly rare example of (bio)chemist turned artist. Marshall studied biochemistry at Oxford University before following an intuition that took her to the Art Academy in Borough, south London. In 2011 she became Sculptor in Residence at the King’s Place, which hosts the Pangolin London gallery in association with the sculpture foundry Pangolin Editions, at which her works were cast during the residency.

The visual language that Marshall deploys in much of her sculpture is one deeply embedded in the tradition of chemical science, and of biochemistry in particular, in which wood, metal, plaster and resin have long been deployed to conjure up representations of the molecular fabrics of the world (including our own). These renditions are necessarily schematic, even symbolic. They can also, like the double-helical framework model of DNA at which James Watson and Francis Crick gaze in that iconic 1953 photograph, be rather beautiful.

2013 is not only the 60th anniversary of Watson and Crick’s discovery of the structure of our genetic material but also the centenary of the invention of the means by which it was disclosed: the technique of X-ray crystallography, devised by William Bragg at the University of Leeds and his son Lawrence at Cambridge. By showing that X-rays deflected from the layers of atoms in crystals can reveal the arrangement of those atoms, the Braggs opened a window onto the molecular world that enabled scientists to figure out the shapes not only of simple crystals such as diamond (one of the first crystal structures deduced by the Braggs) but of complex biological molecules such as protein enzymes. In this way they revealed how, at the smallest scales, we are put together. 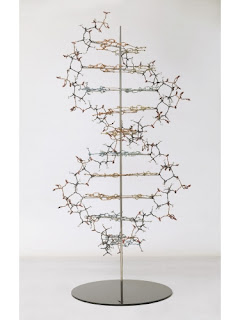 So there it is: the patterns of atoms and molecules do after all connect to the human condition. This is perhaps the guiding metaphor of Marshall’s work. Chemists frequently anthropomorphize their molecules, talking of how they have attractions and aversions, how they ‘prefer’ particular shapes, conformations and environments. In Marshall’s reinvention of the Watson-Crick model DNA: Helix of Life this tendency is made explicit. Each atom is a human form, arms and legs reaching out to join with others. The assembly took meticulous planning, not least because atoms can scarcely be expected to respect human anatomy. The components are atomized in Marshall’s Individual Atoms (Kit to Make DNA), where they become dancers and stylized primitive figurines, some poised as if for flight or crucifixion. Life’s fundamental form, perilously fragile, emerges only when these hands link, just as each atomic figure must find its proper place in Marshall’s 2008 work A Dream of Society as Flawless as Diamond, which reproduces the diamond network of carbon atoms first discovered by the Braggs. 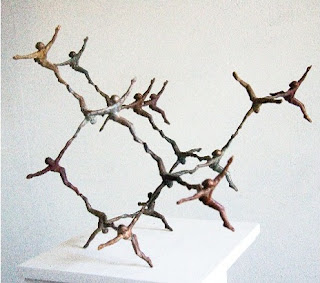 Marshall’s DNA double helix represents the culmination of a period of exploration of molecular form, which included also depictions of the more abstract shapes of enzymes. Her latest work displays a shift to a different scale in the architecture of life: the evolving shape of an embryo. In Carnegie Stages, she shows five successive stages of embryonic growth, beginning with the appearance of a central fold called the primitive streak that defines the axis of bilateral symmetry along which the embryo’s limbs and organs will later be arranged. This, then, is in a sense the ‘human form’ at its most basic: now more than just a ball of undifferentiated cells, with the characteristic symmetry of the human body established. The formation of the primitive streak, about 14 days after fertilization, has in fact been made an indicator of personhood: marking the point at which an embryo can no longer develop into twins, its appearance denotes the time after which embryos made by IVF may no longer be legally sustained in vitro. 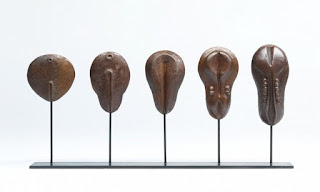 Yet these embryonic forms show nothing recognizably human – for after all, the same shapes are seen also in the development not only of other mammals but of birds and reptiles too. And Marshall has idealized them: exaggerated the symmetry and made the surfaces smooth and edges sharp, so that the nominally biological forms elide into abstraction. If the result evokes resonances with the abstract sculptures of Henry Moore and Barbara Hepworth, that is wholly appropriate, for Moore and Hepworth were themselves inspired by the emergent, lithely contoured forms of organic nature. They were both associated with the style characterized in 1935 by the critic Gregory Grigson as Biomorphism. In part this drew on the vocabulary of macroscopic form evident in natural objects such as bones and weathered stones, but it was also enriched by the visions of amoebae and single-celled organisms that biologists were seeing under the microscope. “When I look at [Moore’s] carvings”, Grigson wrote, “I sometimes have to reflect that so much of our visual experience of the anatomical detail and microscopical forms of life comes to us, not direct, but through the biologist.” The virtuosic exploration of such forms in Scottish zoologist D’Arcy Thompson’s 1917 book On Growth And Form was an explicit influence on Moore (who read it as a student in Leeds) and other representatives of the avant-garde, and it was the inspiration for one of the first major collaborations of artists and scientists in the postwar years, the 1951 exhibition “Growth and Form” at the Institute of Contemporary Arts in London. Moore himself cultivated friendships with scientists, most notably the biologist Julian Huxley, brother of Aldous and grandson of Charles Darwin’s staunch supporter Thomas Henry Huxley.

Marshall made Embryo Spiral while unaware of D’Arcy Thompson’s work, which itself seems to testify to Thompson’s underlying implication in On Growth and Form that there is a fundamental language of natural form which we already intuit. For the so-called logarithmic spiral that she constructs in Embryo Spiral from copper and brass wire, with a tiny but now recognizably human embryo at its focus, has become Thompson’s emblem, shown on the cover of modern editions of his book and engraved on the slate placard that marks his former residence in St Andrews, Scotland. It is the shape of a snail’s shell, of a ram’s curving horn, of an insect’s flight path towards a light. It encodes mathematical relationships that have been awarded (although not by Thompson) almost mystical significance, and Thompson showed how it was a natural consequence of simple laws of growth. In Embryo Spiral it suggests the unfolding of life as a kind of hidden regularity beneath the complexities of embryogenesis and biochemistry: a reassurance of rule and order underpinning the dizzying details of biology.
Posted by Philip Ball at 3:14 AM