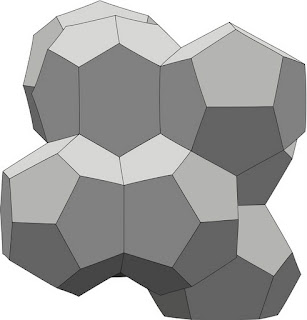 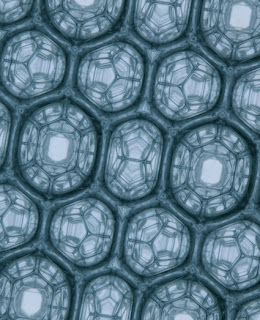 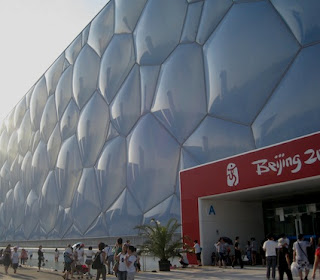 I have a story on Nature’s blog about a nice new paper on ‘minimal foams’, which finally reports evidence for the Weaire-Phelan foam reported several years ago to be a more energetically favourable structure than Kelvin’s, postulated in 1887. Denis Weaire has written a nice (but goodness me, pricey) account of this so-called Kelvin Problem. And I get to show last year’s holiday snaps in Beijing…
_________________________________________________________________
Physicists working at Trinity College in Dublin, Ireland, have finally made the perfect foam. Whereas most Dubliners might consider that to be the head of a pint of Guinness, Denis Weaire and his coworkers have a more sophisticated answer.

‘Perfect’ here means the lowest-energy configuration of packed bubbles of equal size. This is a compromise. Making a soap film costs energy proportional to the film’s surface area. But the many interlocking faces of an array of polyhedral bubbles in a foam also have be mechanically stable. The Belgian scientist J. A. P. Plateau calculated in the nineteenth century that three soaps films are mechanically stable when they meet at angles of 120o, whereas four films meet at the tetrahedral angle of about 109.5o.

So what bubble shape minimizes the total surface area while (more or less) satisfying Plateau’s rules? That’s essentially the same as asking what shape balloons, or any squashy spheres, will adopt when squeezed together. Scientists including the French zoologist Georges Buffon have pondered that, using lead shot and garden peas, for centuries. The Irish scientist Lord Kelvin thought he had the answer in 1887: the ‘perfect foam’ is one in which the cells are truncated octahedra, with eight hexagonal faces and six square ones – provided that the faces are a little curved to better fit Plateau’s rules.

Kelvin’s solution was thought to be optimal for a long time, but there was no formal proof. Then in 1994 Weaire and his colleague Robert Phelan found a better way. It wasn’t so elegant – the structure had a repeating unit of eight polyhedra, six of them with 14 faces and two with 12, all with hexagons and imperfect pentagons and again slight curved (see first pic above). This has 0.3 percent less surface area than Kelvin’s foam.

But does it really exist? The duo found no definitive evidence of their ideal foam in experiments (conducted with washing-up liquid). Now there is. The key was to find the right container. Normal containers have flat walls, which the Weaire-Phelan (WP) foam won’t sit comfortably against. But physicist Ruggero Gabbrielli from the University of Trento figured that a container with walls shaped to fit the WP foam might encourage it to form. He has collaborated with Weaire and his colleagues, along with mathematician Kenneth Brakke at Susquehanna University in Pennsylvania, to design and make one out of plastic.

When the researchers filled this container with equal sized bubbles, they found that the six layers of about 1500 bubbles were ordered into the WP structure (see second pic above). They describe their results in a paper to be published in the Philosophical Magazine Letters.

This isn’t actually the first time that the WP foam has been made. But the previous example was built by hand, one cell at a time, from girders and plastic sheets, to comprise the walls of the iconic Olympic Swimming Stadium in Beijing (see third pic above).
Posted by Philip Ball at 10:02 AM