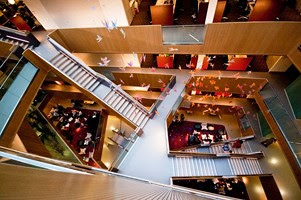 Fresh from visiting some science departments in China, I figure that, in appearance, these places don’t vary much the world over. They have the same pale corridors lined with boxy offices or neutral-hued, cluttered lab spaces; the same wood-clad lecture theatres with their raked seating and projection screens (few sliding blackboards now survive); the same posters of recent research lining the walls. They are unambiguously work places: functional, undemonstrative, bland.

Yet people spend their working lives here, day after day and sometimes night after night. Doesn’t all this functionalist severity and gloom stifle creativity? Clearly it needn’t, but increasingly we seem to suspect that conducive surroundings can offer stimulus to the advancement of knowledge. When the Wellcome Wing of the biochemistry department at Cambridge was designed and built in the early 1960s, its rectilinear modernist simplicity realised in concrete and glass was merely the order of the day, and celebrated by some (notably the influential architectural critic Nikolaus Pevsner) for its precision [1]. Today, stained and weathered, it fares less well, engendering that feeling I get from my old copy of Cotton & Wilkinson that learning chemistry is a dour affair.

Yet no longer are labs and scientific institutions built just to place walls around the benches and fume cupboards. Increasingly, for example, their design takes account of how best to encourage researchers to engage in informal discussions over coffee: comfy seating, daylight and blackboards are supplied to lubricate the exchanges. The notion that all serious work has to take place out of sight behind closed doors has yielded to the advent of open atria and glass walls, exemplified by the new biochemistry laboratory at Oxford, designed by Hawkins/Brown, which opened three years ago at a cost of nearly £50m. Not only does this space take its cue from the open-plan office, but it also follows the corporate habit of adorning the interior with expensive artworks, such as the flock of resin birds that hang suspended in the atrium. Some might grumble that the likes of Hans Krebs and Dorothy Hodgkin did not seem to need art around them to think big thoughts – but the department’s Mark Sansom has eloquently defended thus the value of the project’s artistic component: “if you have a greater degree of visual literacy, you reflect more on both the way you represent things, and also the way that may limit the way you think about them” [2]. Besides, where would you rather work?

The watchword for this new approach to laboratory design is accessibility: physically, visually, intellectually. Jonathan Hodgkin in Oxford’s biochemistry department explains that, in making art a part of the new building’s design, “part of our aim is to humanize the image of science for the public" [2]. Similarly, Terry Farrell, who was behind the dramatic (and controversial) redesign of the Royal Institution in London, says that his aim was to reconfigure the place “not as a museum but as a living, working, lively and engaging institution, which will inspire an enthusiasm for science in future generations” [3]. Even someone like me who loved the dusty, crammed warren that was the old RI has to admire the result, although the compromises to the research lab space contributed to the internal tensions of the project.

Or take the striking glass facades of the new Frick Chemistry Laboratory at Princeton, whose chief architect Michael Hopkins says that "We wanted to inspire the younger students by letting them see the workings of the department.” A common theme is to use the design to echo the science, as for example in the double-helical staircase of the European Molecular Biology Laboratory’s Advanced Training Centre in Heidelberg.

However, not all beautiful labs are new ones, a point illustrated in a recent list of “the 10 most beautiful college science labs” compiled by the US-based OnlineColleges.net. While some of these have been selected for their sleek contemporary feel – the Frick building is one, and the stunning new Physical Sciences Building that abuts Cornell’s neoclassical Baker Laboratory is another – others are more venerable. Who could quibble, for example, with the inclusion of Harvard’s Mallinckrodt Laboratory, an imposing neoclassical edifice built in the 1920s and home to the chemistry department? And then there is the Victorian gothic of the ‘Abbot’s kitchen’ in the Oxford inorganic chemistry labs, a delightful feature that I shamefully overlooked on many a tramp along South Parks Road to coax more crystals out of solution. Or the ivy-coated mock-gothic of Chicago’s Ryerson Physical Laboratory, where Robert Millikan deduced the electron’s charge.

Among these ‘beautiful labs’, chemistry seems to be represented disproportionately. Have we chemists perhaps a stronger aesthetic sensibility?