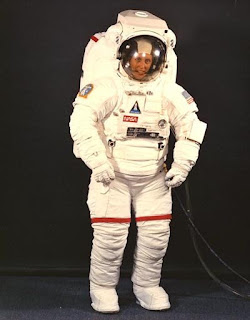 A wardrobe for Mars

[This is my Material Witness column for the September issue of Nature Materials.]

No one has a date booked for a party on the moon or on Mars, but that hasn’t stopped some from thinking about what to wear. One thing is clear: there is nothing fashionably retro about the Apollo look. If, as seems to be the plan, we are going out there this time to do some serious work, the bulky gas bags in which Alan Shepard and his buddies played golf and rode around in buggies aren’t up to the job. Pressurized with oxygen, the suits could be bent at the arm and leg joints only with considerable effort. A few hours’ of lunar hiking and you’d be exhausted.

In comparison, the fetching silver suits worn for the pre-Apollo Mercury missions look almost figure-hugging. But that’s because they were worn ‘soft’ – the astronauts didn’t venture outside their pressurized cabins, and the suits would have inflated only in the event of a pressure loss. In the vacuum of space, high pressure is needed to prevent body fluids from boiling.

But pressurization is only a part of the challenge. Space-suit design presents a formidable, multi-faceted materials challenge. The solution has to involve a many-layered skin – sometimes more than a dozen layers, each with a different function. This makes the suit inevitably bulky and expensive.

While the Mercury suits were basically souped-up high-altitude pilots’ suits, made from Neoprene-coated and aluminized nylon, today’s spacewear tends to follow the Apollo principle of several distinct garments worn in layers. A liquid cooling and ventilation garment (LCVG) offers protection from temperatures that can reach 135 oC in the Sun’s glare, while allowing body moisture to escape; a pressure suit (PS) acts as a gas-filled balloon; and a thermomechanical garment (TMG) protects against heat loss, energetic radiation, puncture by micrometeoroids, and abrasion.

These suits initially made use of the materials to hand, but inevitably this resulted in some ‘lock-in’ whereby ‘tradition’ dominated materials choices rather than this being reconsidered with each redesign. Some Apollo materials, such as the polyimide Kapton and the polyamide Kevlar, are still used – Kapton’s rigidity and low gas permeability recommends it for containing the ballooning PS, while Kevlar’s strength is still hard to beat for the TMG. But not all the choices are ideal: a Spandex LCVG has rather poor wicking and ventilation properties. Indeed, a reanalysis from scratch suggests superior replacements for most of the ‘traditional’ materials (J. L. Marcy et al., J. Mat. Eng. Perf. 13, 208; 2004; see paper here).

Space suits have increased in mass since Apollo, because they are now used in zero rather than lunar gravity. But martian gravity is a third that of Earth. To improve suit flexibility and reduce mass, Dava Newman and coworkers at the Massachusetts Institute of Technology are reconsidering the basic principles: using tight-fitting garments rather than gas to exert pressure, while strengthening with a stiff skeleton along lines of non-extension. These BioSuits are several years away from being ready for Mars – but there’s plenty of time yet to prepare for that party.
Posted by Philip Ball at 1:38 AM