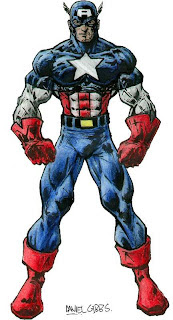 Spider-Man’s buddies and other elites
[This is the pre-edited version of my latest article for muse@nature.com.]

Marvel Universe reflects some of the undesirable properties of our social webs, while suppressing others for moral ends.

In which society do powerful males form a dominant, elitist network while the women are relegated to peripheral roles?

In which society are all the villains portrayed as warped loners while the heroes are a fraternal team united by their fight against evil?

Banish those wicked thoughts. This isn’t the real world, you cynics, but pure fantasy. We’re talking about the Marvel Universe.

This, as any comic-book geek will tell you, is where Spider-Man, Captain America and the Hulk do their thing. As indeed does the Thing. But no, not Batman or Superman – they are part of the DC Universe, and not on speaking terms with the Marvelites. Do keep up.

The story so far: in 2002 Spanish mathematician Ricardo Alberich and colleagues in Mallorca analysed the social network formed by the Marvel comic characters according to whether they have appeared together in the same story [1]. There are around 6,500 of these characters in nearly 13,000 Marvel comic books, so there’s plenty of data to reveal patterns and trends. Indeed, even the world of classical Greek and Roman mythology looks puny by comparison, with just 1,600 or so named characters in its pantheon.

What’s more, the Marvel Universe has become as incestuous as Hollywood in the way the stars hang out with one another – particularly after the relaunch of Marvel Comics in 1961, which spawned well-known gangs such as the Fantastic Four and the X-Men. Take the character Quicksilver, for instance, who first appeared as a member of Magneto’s Brotherhood of Evil Mutants (he is Magneto’s son). He later became a member of the Avengers, and then of the X-Factor, and finally the Knights of Wundagore. His twin sister is the Scarlet Witch, and his wife is Crystal, who was previously dating the Fantastic Four’s Human Torch and was a member of the Inhumans. Are you following this?

Perhaps fortunately, Alberich and team did not have to read every Marvel comic since they began (as Timely Comics) in 1939, for all these connections have been gathered into a database called the Marvel Chronology Project. They deduced that the Marvel network looks in many ways remarkably like those formed in real-world collaborations. Not only is the Marvel Universe a small world, where just about any character can be linked to any other by just a few ‘degrees of separation’, but it is a so-called scale-free world, where the distribution of links has a characteristic form that includes a few very highly connected hubs. In comparison, a random distribution of links would create no such network superstars.

This scale-free structure seems to arise when networks grow in a particular way: each new node forms links to existing nodes in a way that is probabilistic but biased so that nodes that are already highly connected are more likely to receive the new links. In this way, the rich get richer (where richness is a matter of links you have).

The Marvel Universe, like our own societies, is unplanned: it has grown from the work of many comic-book story-writers who have made no attempt to engineer any overall social network. It seems that this joint effort guided them not towards a random network, as might have been expected, but towards one that (somewhat) mirrors reality. The same thing seems to have happened in classical mythology, another ‘multi-author’ story cycle that turns out to share the scale-free social network structure [2].

But Marvel Universe isn’t a perfect match for the way real people interact. In particular, a few of the most popular characters, such as Spider-Man and Captain America, have more connections and thus more influence than anyone would in the real social world. The Marvel writers appear to have succumbed to an unrealistic degree of favouritism.

The scale-free properties of social and other networks were discovered several years ago, but it’s become increasingly clear that looking simply at the statistics of linkages is a fairly crude way of interpreting the web’s structure. Researchers are now keen to ferret out the ways in which a network is divided into distinct communities – friendship circles, say, or professional collaborators – which might then be woven together by a more tenuous web of links. Social networks are, in the sense, hierarchically organized.

A key characteristic of human social networks, identified by Mark Newman of the University of Michigan, is that highly connected (‘rich’) nodes are more likely to be connected to other rich nodes than would be expected by chance – and likewise for ‘poor’ nodes [3]. In other words, the hub members are more likely to be pals with each other than with an individual selected at random. This is called assortative mixing, and contrasts with the structure of scale-free technological and biological networks, such as the Internet and food webs, for which the opposite is true.

Pablo Gleiser of the Centro Atómico Bariloche in Argentina has now delved into the community structure of the Marvel Universe, and shows that it too has assortative ‘rich clubs’ [4], whose well-connected members provide the ‘glue’ that binds distinct communities into a cohesive net. That in itself seems to suggest that here is another way in which the Marvel Universe is a pretty good mimic of reality.

But who are in these rich clubs? Their members are all heroes, and they’re all male. In this universe, women don’t bring communities together but sit on the fringes. That’s an old story – with a smattering of honourable exceptions, women have never fared well in comic books.

Yet the bad guys are no good at forming teams either. Why is that? Gleiser thinks the answer lies in the code created by the Comics Magazine Association of America in 1954 to govern the moral framework of the stories. It stipulates that criminals should not be glamorized, and that evil should be portrayed only to make a moral point: “In every instance good shall triumph over evil and the criminal punished for his misdeeds.”

This means, says Gleiser, that “villains are not destined to play leading roles”, and as a result they aren’t going to become hub characters. He thinks that the predestined victory of the good guys meanwhile encourages collaborations so as to avoid the impression that they are omnipotent and can do their job easily.

But in a world where the CIA is devoting considerable effort to understanding the structures of organized-crime and terrorist networks, it seems that Marvel Universe has become outdated in insisting that its villains work alone (and equally, one might add, that ‘heroes’ prefer collaboration over unilateralism). And sadly, in the real world there is no one to insist that good shall triumph over evil. Not even Captain America.

Pow! Was the Muse edition edited by Janet Street-Porter?

I found your original to be well balanced and easy to read. The final in the Muse was over egged with feminism.

This is a job for 'Misogynist Man'.
Don't thank me Ma'am, it's my job.

Bless you Jim, I don't imagine anyone else ever makes the comparison.
Janet Street Porter a feminist? With her self-obsession and lack of even the semblance of a coherent mind, she does more to damage the image of women than almost anyone else in the media. Why the Indy tolerates her, I can't imagine.

I think there should be a women network where women can talk about all the things that they wish. It's not the right thing to define the women as feminists or just glamorous ladies. We all are different and bright personalities and we need to show that!