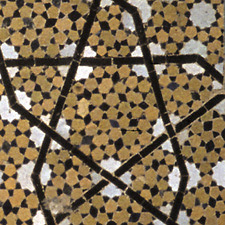 Quasicrystal enthusiasts may have been baffled by a rather cryptic spate of comments and clarifications following in the wake of a recent article claiming that medieval Islamic artists had the tools needed to construct quasicrystalline patterns. That suggestion was made by Peter Lu at Harvard University and Paul Steinhardt at Princeton (Science 315, 1106; 2007). [See my previous post on 23 February 2007] But in a news article in the same issue, staff writer John Bohannon explained that these claims had already caused controversy, being allegedly anticipated in the work of crystallographer Emil Makovicky at the University of Copenhagen (Science 315, 1066; 2007).

The central thesis of Lu and Steinhardt is that Islamic artists used a series of tile shapes, which they call girih tiles, to construct their complex patterns. They can be used to make patterns of interlocking pentagons and decagons with the ‘forbidden’ symmetries characteristic of quasicrystalline metal alloys, in which these apparent symmetries, evident in diffraction patterns, are permitted by a lack of true periodicity.

Although nearly all of the designs evident on Islamic buildings of this time are periodic, Lu and Steinhardt founds that those on a fifteenth-century shrine in modern-day Iran can be mapped almost perfectly onto another tiling scheme, devised by mathematician Roger Penrose, which does generate true quasicrystals.

But in 1992 Makovicky made a very similar claim for a different Islamic tomb dating from 1197. Some accused Lu and Steinhardt of citing Makovicky’s work in a way that did not make this clear. The authors, meanwhile, admitted that they were unconvinced by Makovicky’s analysis and didn’t want to get into an argument about it.

The dispute has ruffled feathers. Science subsequently published a ‘clarification’ that irons out barely perceptible wrinkles in Bohannon’s article, while Lu and Steinhardt attempted to calm the waters with a letter in which they ‘gladly acknowledge’ earlier work (Science 316, 982; 2007). It remains to be seen whether that will do the trick, for Makovicky wasn’t the only one upset by their paper. Design consultant Jay Bonner in Santa Fe has also made previous links between Islamic patterns and quasicrystals.

Most provocatively, Bonner discusses the late-fifteenth-century Topkapi architectural scroll that furnishes the key evidence for Lu and Steinhardt’s girih scheme. Bonner points out how this scroll reveals explicitly the ‘underlying polygonal sub-grid’ used to construct the pattern it depicts. He proposes that the artists commonly used such a polygonal matrix, composed of tile-like elements, and demonstrates how these can create aperiodic space-filling designs.

Bonner does not mention quasicrystals, and his use of terms such as self-similarity and even symmetry do not always fit easily with that of physicists and mathematicians. But there’s no doubting that his work deepens the ‘can of worms’ that Bohannon says Lu and Steinhardt have opened.

All this suggests that the satellite conference of the forthcoming European Crystallographic Meeting in Marrakech this August, entitled ‘The enchanting crystallography of Moroccan ornaments’, might be more stormy than enchanting – for it includes back-to-back talks by Makovicky and Bonner.
Posted by Philip Ball at 2:05 AM