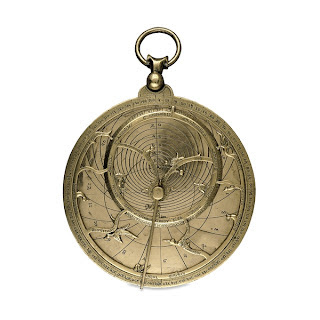 Is this Chaucer’s astrolabe?

[This is the pre-edited version of my latest article for Nature’s online news. the original paper is packed with interesting stuff, and makes me want to know a lot more about Chaucer.]

Several astronomical instruments have been misattributed to the medieval English writer

Want to see the astrolabe used for astronomical calculations by Geoffrey Chaucer himself? You’ll be lucky, says Catherine Eagleton, a curator at the British Museum in London.

In a paper soon to be published in the journal Studies in the History and Philosophy of Science [doi:10.1016/j/shpsa.2007.03.006], she suggests that the several astrolabes that have been alleged as ‘Chaucer’s own’ are probably not that at all.

It’s more likely, she says, that these are instruments made after Chaucer’s death according to the design the English scholar set out in his Treatise on the Astrolabe. Such was Chaucer’s reputation in the centuries after his death that instrument-makers may have taken the drawings in his book as a blueprint.

Eagleton thinks that the claims are therefore back to front: the instruments alleged to be Chaucer’s own were not the ones he used for his drawings, but rather, the drawings supplied the design for the instruments.

Born around 1343, Chaucer is famous now for his literary work known as The Canterbury Tales. But he was a man of many interests, including the sciences of his age: the Tales demonstrate a deep knowledge of astronomy, astrology and alchemy, for example.

He was also a courtier and possibly acted as a spy for England’s King Richard II. “He was an intellectual omnivore”, says Eagleton. “There’s no record that he had a formal university education, but he clearly knows the texts that academics were reading.”

There are several ‘Chaucerian astrolabes’ that have characteristic features depicted in Chaucer’s treatise. Sometimes this alone has been used to date the instruments to the fourteenth century and to link them more or less strongly to Chaucer himself.

An astrolabe is an instrument shaped rather like a pocket watch, with movable dials and pointers that enable the user to calculate the positions of the stars and the Sun at a particular place and time: a kind of early astronomical computer. It is simultaneously a device for timekeeping, determining latitude, and making astrological forecasts.

The astrolabe may have been invented by the ancient Greeks or Indians, but Islamic scientists made its construction a fine art. The designs shown in Chaucer’s books have some distinctive features – in particular, capital letters marking the 24 hours of the day, and a symbol of a dog to represent the Dog Star.

Eagleton says that these correspondences have led some collectors and dealers to claim that a particular instrument could be the very one Chaucer held in his hand. “There are probably four or five of these around”, she says, “but no one needs five astrolabes.”

“There’s a real tendency to link any fourteenth-century instrument to him”, she says, adding that museum curators are usually more careful. The British Museum doesn’t make such strong claims for its own ‘Chaucerian astrolabes’, for example. (The one shown above is called the ‘Chaucer astrolabe’, and is unusual in being inscribed with a pre-Chaucerian date of 1326 – but the museum is suitably cautious about what it infers from that.)

But Eagleton says that an instrument held at Merton College in Oxford University is generally just called ‘Chaucer’s astrolabe’, with the implication that it was his.

She says that none of the ‘Chaucerian astrolabes’ can in fact be definitively dated to the fourteenth century, and that all four of those she studied closely, including another Chaucerian model at the British Museum and one at the Museum of the History of Science in Oxford called the Painswick astrolabe, have features that suggest they were made after Chaucer’s treatise was written. For example, the brackets holding the rings of these two astrolabes have unusual designs that could be attempts to copy the awkward drawing of a bracket in Chaucer’s text, which merges views from different angles. The treatise, in other words, came before the instruments.

“It is extremely unlikely that any of the surviving instruments were Chaucer’s own astrolabe”, she concludes.

So why have others thought they were? “There is this weird celebrity angle, where people get a bit carried away”, she says. “It is always tempting to attach an object to a famous name – it’s a very human tendency, which lets us tell stories about them. But it winds me up when it’s done on the basis of virtually no evidence.”

This isn’t a new trend, however. Chaucer was already a celebrity by the sixteenth century, so that a whole slew of texts and objects became attributed to him. This was common for anyone who became renowned for their scholarship in the Middle Ages.

Of course, whether or not an astrolabe was ‘Chaucer’s own’ would be likely to affect the price it might fetch. “This association with Chaucer probably boosts the value”, says Eagleton. “I might be making myself unpopular with dealers and collectors.”
Posted by Philip Ball at 3:11 AM