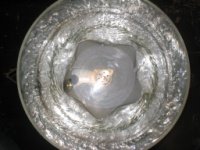 Weird things in a bucket of water

That's all you need to punch a geometric hole in water. Take a look. When the bucket is rotated so fast that the depression in the central vortex reaches the bottom, it can develop a cross-section shaped like triangles, squares, pentagons and hexagons. My story about it is here.

Harry Swinney at Texas says that this isn't unexpected – a symmetry-breaking wavy instability is bound to set in eventually as the rotation speed rises. Harry has seen related things in rotating disk-shaped tanks (without a free water surface) created to model the flows on Jupiter (see Nature 331, 689; 1988).

The intriguing question is whether this has anything to do with the polygonal flows and vortices seen in planetary atmospheres – both in hurricanes on Earth and in the north polar circulation of Saturn. It's not clear that it does – Swinney points out that the Rossby number (the dimensionless number that dictates the behaviour in the planetary flows) is very different in the lab experiments. But he doesn't rule out the possibility that the phenomenon could happen in smaller-scale atmospheric features, such as tornadoes. Tomas Bohr tells me anecdotally that he's heard of similar polygonal structures having been produced in the 'toy tornadoes' made by Californian artist Ned Kahn – whose work, frankly, you should check out in any case.
Posted by Philip Ball at 11:12 AM

I have check out the 'toy tornadoes' (“Encircled Stream”) made by Californian artist Ned Kahn (http://nedkahn.com/water.html) and no polygonal core shapes were clearly visible. However the event shown in video clip is similar to the first phenomenon that was reported by us (G. H. Vatistas, J. Fluid Mech. 217, 241 (1990)). If the sidewalls of the reservoir used were straight than inclined, then the solitary wave that was reported in the previous paper could evolve.