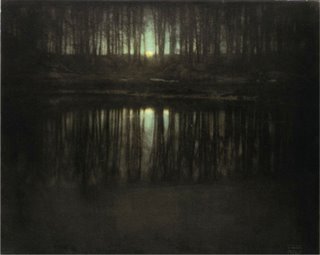 We all know that platinum is a precious metal, but paying close to $3 million for a few grams of it seems excessive. Yet that is what a private art collector has just done. The inflated value of the metal in this case stems from how it is arranged: as tiny black particles scattered over a sheet of gummed paper so as to portray an image of the moon rising over a pond on Long Island in 1904. This is, in other words, a photograph, defined in platinum rather than silver. It was taken by the American photographer Edward Steichen, and in February it sold at Sotheby’s of New York for $2,928,000 – a record-breaking figure for a photo.

At the same sale, a photo of Georgia O’Keeffe’s hands recorded in a palladium print by Alfred Stieglitz in 1918 went for nearly $1.5 million (the story is told by Mike Ware here). Evidently these platinum-group images have become collector’s items.

The platinotype process was developed (excuse the pun) in the nineteenth century to address some of the shortcomings of silver prints. In particular, while silver salts have the high photosensitivity needed to record an image ‘instantly’, the metal fades to brown over time because of its conversion to sulphide by reaction with atmospheric sulphur gases. That frustrated John Herschel, one of the early pioneers of photography, who confessed in 1839 that ‘I was on the point of abandoning the use of silver in the enquiry altogether and having recourse to Gold or Platina’.

Herschel did go on to create a kind of gold photography, called chrysotype. But it wasn’t until the 1870s that a reliable method for making platinum prints was devised. The technique was created by the Englishman William Willis, and it became the preferred method for high-quality photography for the next 30 years. A solution of iron oxalate and chloroplatinate was spread onto a sheet coated with gum arabic or starch and exposed to light through the photographic negative. As the platinum was photochemically reduced to the finely divided metal, the image appeared in a velvety black that, because of platinum’s inertness, did not fade or discolour. ‘The tones of the pictures thus produced are most excellent, and the latter possess a charm and brilliancy we have never seen in a silver print’, said the British Journal of Photography approvingly.

To enrich his moonlit scene, Steichen added a chromium salt to the medium, which is trapped in the gum as a greenish pigment, giving a tinted, painterly image reminiscent of the night scenes painted by James McNeill Whistler. Steichen and Stieglitz helped to secure the recognition of photography as a serious art form in the USA.

Stieglitz’s use of palladium rather than platinum in 1918 reflects the demise of the platinotype. The metal was used to catalyse the manufacture of high explosives in World War I, and so it could not be spared for so frivolous a purpose: making shells was more important than making art.

(This article will appear in the July issue of Nature Materials.)
Posted by Philip Ball at 6:17 AM