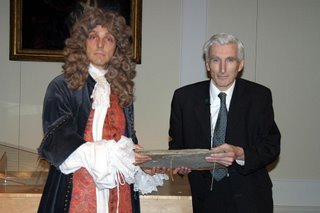 The return of Dr Hooke

Yes, he seemed pleased to be back at the Royal Society after 303 years – though disconcerted at the absence of his portrait, especially while those of his enemies Oldenburg and Newton were prominently displayed. Hooke had returned to present his long-lost notes to the President, Sir Martin Rees. These, Hooke’s personal transcriptions of the minutes of the Royal Society between 1661 and 1682, were found in a cupboard in Hampshire and due to be auctioned at Bonhams until the Royal Society managed to raise the £1 million or so needed to make a last-minute deal. The official hand-over happened on 17th May, and the chaps at the Royal Society decided it would be fun to have Hooke himself do the honours. But who should don the wig? Well, I hear that bloke Philip Ball has done a bit of acting…

I didn’t take much persuading, I have to admit. Partly this is because I can’t help feeling some affinity to Hooke – not because I am short with a hunched back, a “man of strange unsociable temper”, and constantly getting into priority disputes, but because I too was born on the Isle of Wight. (There is scandalously little recognition of that fact on the Island – I suspect that most residents do not realise that is why Hook Hill in Freshwater is so named.) But it was also because I could not pass up the opportunity to get my hands on his papers. I didn’t, however, reckon on getting half an hour alone with them. I had a good look through, but I’m afraid I’m not able to reveal any exclusive secrets about what they contain – not because I am sworn to silence, but because, what with Hooke’s incredibly tiny scrawl and my struggles to keep my stockings from falling down without garters, I didn’t get much chance to study them in detail. All the same, it was thrilling to see pages headed “21 November 1673: Chris. Wren took the chair.” And I enjoyed a comment that the Royal Society had received a letter from Antoni von Leeuwenhoek but deferred reading it until the next meeting because “it is in Low Dutch and very long.”

The anonymous benefactors truly deserve our gratitude for keeping these pages where they belong – at the Royal Society. There will be a video of the proceedings. on the RS’s web pages soon.
Posted by Philip Ball at 9:28 AM