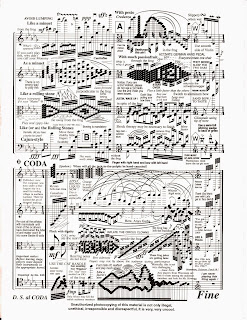 Here is my latest Music Instinct column for Sapere magazine. I collected some wonderful examples of absurdly complicated scores while working on this, but none with quite the same self-mocking wit as the one above.

There’s no accounting for taste, as people say, usually when they are deploring someone else’s. But there is. Psychological tests since the 1960s have suggested that what people tend to look for in music, as in visual art, is an optimal level of complexity: not too much, not too little. The graph of preference versus complexity looks like an inverted U [1].

Thus we soon grow weary of nursery rhymes, but complex experimental jazz is a decidedly niche phenomenon. So what is the ideal level of musical complexity? By some estimates, fairly low. The Beatles’ music has been shown to get generally more complex from 1962 to 1970, based on analysis of the rhythmic patterns, statistics of melodic pitch-change sequences and other factors [2]. And as complexity increased, sales declined. Of course, there’s surely more to the trend than that, but it implies that “All My Loving” is about as far as most of us will go.

But mightn’t there be value – artistic, if not commercial – in exploring the extremes of simplicity and complexity? Classical musicians evidently think so, whether it is the two-note drones of 1960s ultra-minimalist La Monte Young or the formidable, rapid-fire density of the “New Complexity” school of Brian Ferneyhough. Few listeners, it must be said, want to stay in these rather austere sonic landscapes for long.

But musical complexity needn’t be ideologically driven torture. J. S. Bach sometimes stacked up as many as six of his overlapping fugal voices, while the chromatic density of György Ligeti’s Atmosphères, with up to 56 string instruments all playing different notes, made perfect sense when used as the soundtrack to Stanley Kubrick’s 2001: A Space Odyssey.

The question is: what can the human mind handle? We have trouble following two conversations at once, but we seem able to handle musical polyphony without too much trouble. There are clearly limits to how much information we can process, but on the whole we probably sell ourselves short. Studies show that the more original and unpredictable music is, the more attentive we are to it – and often, relatively little exposure is needed before a move towards the complex end of the spectrum ceases to be tedious or confusing and becomes pleasurable. Acculturation can work wonders. Before pop music colonized Indonesia, gamelan was its pop music – and that, according to one measure of complexity rooted in information theory, is perhaps the most complex major musical style in the world.