I had meant to put up this piece – my October Crucible column for Chemistry World – some time back, so as to have the opportunity to show more of the amazing images of Liu Bolin. So anyway, here it is.

When I first set eyes on Liu Bolin, I didn’t see him at all. The Chinese artist has been dubbed the “Invisible Man”, because he uses extraordinarily precise body-painting to hide himself against all manner of backgrounds: shelves of magazines or tins in supermarkets, government propaganda posters, the Great Wall. What could easily seem in the West to be a clever gimmick becomes a deeply political statement in China, where invisibility serves as a metaphor for the way the state is perceived to ignore or “vanish” the ordinary citizen, while the rampant profiteering of the booming Chinese economy turns individuals into faceless consumers of meaningless products. In one of his most provocative works, Liu stands in front of the iconic portrait of Mao Zedong in Tiananmen Square, painted so that just his head and shoulders seem to be superimposed over those of the Great Helmsman. In another, a policeman grasps what appears to be a totally transparent, almost invisible Liu, or places his hands over the artist’s invisible eyes. 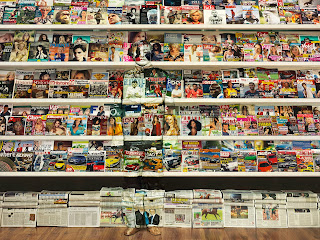 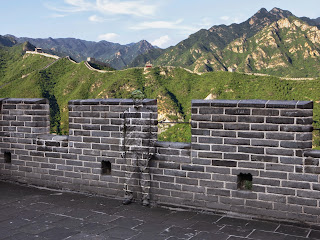 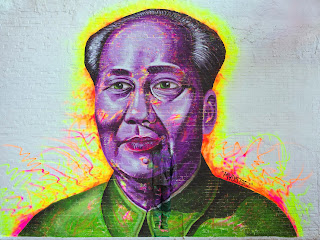 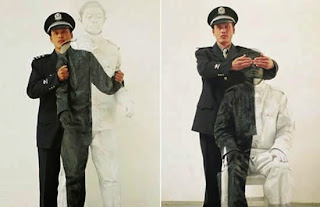 More recently Liu has commented on the degradation of China’s environment and the chemical adulteration of its food and drink. Some of these images are displayed in a new exhibition, A Colorful World?, at the Klein Sun Gallery in New York, which opened on 11 September. The title refers to “the countless multicolored advertisements and consumer goods that cloud today’s understanding of oppression and injustice.” But it’s not just their vulgarity and waste that Liu wants to point out, for in China there has sometimes been far more to fear from foods than their garish packaging. “The bright and colorful packaging of these snack foods convey a lighthearted feeling of joy and happiness, but what they truly provide is hazardous to human health”, the exhibition’s press release suggests. It’s bad enough that the foods are laden with carcinogens and additives, but several recent food scandals in China have revealed the presence of highly dangerous compounds. In 2008, some leading brands of powdered milk and infant formula were found to contain melamine, a toxic carcinogen added to boost the apparent protein content and so allow the milk to be diluted without failing quality standards. Melamine can cause kidney stones – several babies died from that condition, while many thousands were hospitalized. 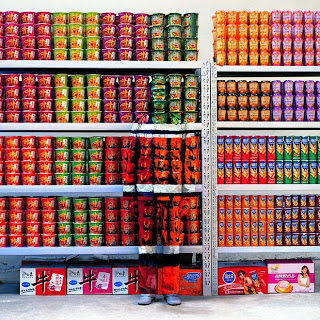 There have been several other cases of foods treated with hormones and other hazardous cosmetic additives. The most recent involves the use of phthalate plasticizers in soft drinks as cheap replacements for palm oil. These compounds may be carcinogenic and are thought to disrupt the endocrine and reproductive systems by mimicking hormones. In his 2011 work Plasticizer, Liu commented on this use of such additives by “disappearing” in front of supermarket shelves of soft drinks. 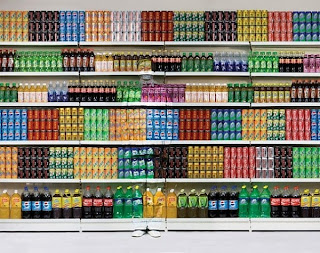 So there is no knee-jerk chemophobia in these works, which represent a genuine attempt to highlight the lack of accountability and malpractice exercised within the food industry – and not just in China. The same is true of Liu’s Cancer Village, part of his Hiding in the City series in which he and others are painted to vanish against Chinese landscapes. The series began as a protest against the demolition of an artists’ village near Beijing in 2005 – Liu vanished amongst the rubble – but Cancer Village illustrates the invisibility and official “non-existence” of ordinary citizens in the face of a much more grievous threat: chemical pollution from factories, which seems likely to be the cause of a massive increase in cancer incidence in the village of the 23 people who Liu and his assistants have merged into a field behind which a chemical plant looms.

Such politically charged performance art walks a delicate line in China. Artists there have refined their approach to combine a lyrical, even playful obliqueness – less easily attacked by censors – with resonant symbolism. When in 1994 Wang Jin emptied 50 kg of red organic pigment into the Red Flag Canal in Henan Province for his work Battling the Flood, it was a sly comment not just on the uncritical “Red China” rhetoric of the Mao era (when the canal was dug) but also on the terrible bloodshed of that period. 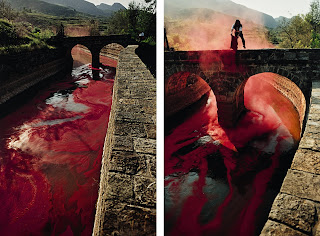 It could equally have been a statement about the lamentable state of China’s waterways, where pollution, much of it from virtually unregulated chemicals plants, has rendered most of the river water fit only for industrial uses. That was certainly the concern highlighted by Yin Xiuzhen’s 1995 work Washing the River, in which the artist froze blocks of water from the polluted Funan River in Chengdu and stacked them on the banks. Passers-by were invited to “wash” the ice with clean water in an act that echoed the purifying ritual of baptism. This year Yin has recreated Washing the River on the polluted Derwent River near Hobart, Tasmania. 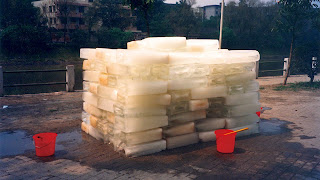 These are creative and sometimes moving responses to problems with both technological and political causes. They should be welcomed by scientists, who are good at spotting such problems but sometimes struggle to elicit a public reaction to them.
Posted by Philip Ball at 3:26 AM