The benefits of bendy wings 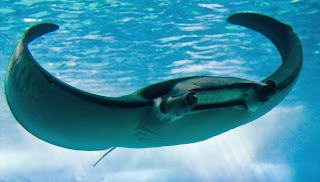 From insects to whales, flying and swimming animals use the same trick.

A new design principle that enables animals to fly has been discovered by a team of US researchers. They say that the same principle is used for propulsion by aquatic creatures, and suggest that it could supply guidance for designing artificial devices that propel themselves through air and water. The work is published today in Nature Communications [1].

The findings are welcomed by animal-flight expert Graham Taylor of Oxford University, who says that they “should certainly prove a fruitful area for future research”.

The earliest dreams of human flight, from Icarus to Leonardo da Vinci, drew on the notion of flapping wings, like those of birds or bats. But practical designs from the Wright brothers onward have largely abandoned this design in favour of the stationary aerofoil wing. Does that have to be the way, or might artificial flapping-wing devices be built?

In fact, a few have been already, but only very recently. In 2011, the German automation technology company Festo announced a small remote-controlled aircraft called the SmartBird that used flapping wings, based on the motion of a seagull. Aerospace engineers at the University of Illinois at Urbana Champaign are developing a “robotic bat” [2]. Some flying devices have also been based on insect flapping-wing flight, which use rapid wingbeats to produce upwards thrust that allows hovering and high manoeuvrability [3], while others have mimicked the undulating movements of jellyfish [4-6].

Developing flying machines based on bird-like flapping-wing aerodynamics is hampered by the lack of information about how birds achieve stability and control. John Costello of Providence College on Rhode Island, USA, and his colleagues believed that these flight properties might depend crucially on the fact that, unlike the wings of many human craft, animal wings are not rigid but flexible.

Yet there have been conflicting views on how wing flexibility affects the thrust produced by wing flapping, even to the extent of whether it helps or hinders. Costello and colleagues decided to take an empirical approach – to look at just how much real animal wings deform during flight.

They suspected that the same effect of bending should be evident in the operation of fins and flukes used for propulsion in water. In fact, they were initially motivated by their participation in a project for the US Office of Naval Research to develop a biologically inspired “jellyfish vehicle” [5,6].

That work, says Costello, showed that “the addition of a simple passive flap to an otherwise fairly rigid bending surface resulted in orders of magnitude increases in propulsive performance”. But what exactly were the rules behind these bending effects? “We reasoned that animals solved this problem several hundred million years ago”, says Costello, “so we decided to start by looking at natural forms.”

To gather data on the amount of deformation of wings and fins during animal movement, the researchers combed Youtube and Vimeo for video footage of species ranging from fruitflies to humpback whales and from molluscs to bats. They had to be extremely selective in what they used. They needed footage of steady motion (no slowing or speeding up), they needed to compare many flapping cycles for the same species, and they needed to find motion in the plane perpendicular to the line of vision, to obtain accurate information on the amount of bending.

This data was painstakingly collected by team members Kelsey Lucas of Roger Williams University in Bristol, Rhode Island, and Nathan Johnson at Providence College. “I’m not sure how many hundreds or thousands of video sequences they viewed and discarded” Costello admits. “It took many months of searching.”

They found that, for all the vast diversity of propulsor shapes and structures – gossamer-thin membranes, feathered wings, thick and heavy whale tails – there was rather little variation in the bending behaviour when measured (by eye) using the right variables. Specifically, when the data were plotted on a graph of the “flexion ratio” – the ratio of the length from “wing” base to the point where bending starts, to the total “wing” length – against maximum bending angle, all the points clustered within a small region.

In other words, this seems to be an example of “convergent evolution” – animals with very different evolutionary backgrounds have all “found” the same solution to a common problem, in this case the most effective bending criterion for propulsion through fluids. “Whether an animal is a fish or mollusc swimming in water or an insect or bird flying through the air, they all evolved to move within fluid environments”, says Costello. “Their evolution has been governed by the physical laws that determine fluid interactions. It doesn’t matter whether they originated from crawling, walking or jumping ancestors – once they adapted to a fluid, they evolved within a system determined by a common set of limits.”

“Perhaps the simple fact that wings, fins, and flukes of all shapes and sizes deform in a similar manner is not so surprising”, says Taylor. “What is surprising is the coupled variation in materials, morphology, and movement that this similarity implies” – so that “the comparatively flimsy wing of an insect deforms to the same extent in flight as does the powerful fleshy tail fluke of a killer whale”.

Costello is cautiously optimistic about translating the findings into aeronautical engineering design principles. First, he says, more needs to be known about why this narrow range of bending motions is advantageous for propulsion. “We hope to uncover more about the hydrodynamic reasons that these patterns are so common”, he says. “Maybe then the advantages that these animals have found in these traits can be translated into human designs.”