Making sense of music - in Italian 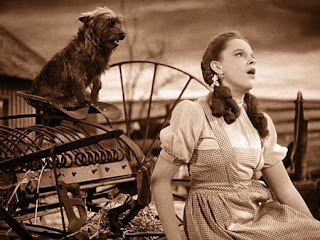 A popular-science magazine called Sapere has been published monthly in Italy since 1935. (There's a nice history of science popularization in Italy here.) Sapere is now produced by the Italian publisher Dedalo, who are aiming to revitalize it. They have asked me to contribute a regular column, which will be about the cognition of music. Each month I’ll focus on one or two particular pieces of music and explain how they do what they do. Here’s a slightly extended version of the introductory column, which takes as its subject “Over the Rainbow”.

How do we make sense of music, and why does it move us? While much is still mysterious about it, some is not. Cognitive science and neuroscience are starting to reveal rules that our minds use to turn a series of notes and chords into a profound experience that speaks to us and reaches into the depths of our soul. In these columns I’ll aim to explain some of the rules, tricks and principles that turn sound into music.

One of the first things we notice about a song is the melody. Certain melodies capture our attention and interest more than others, and the songwriter’s goal is to find ones that stick. How do they do it?

Take “Over the Rainbow”, the ballad written by Harold Arlen and E. Y. Harburg for The Wizard of Oz (1939). We remember it partly for Judy Garland’s plangent voice – it became her signature tune – but it grabs us from the start with that soaring leap on “Some-where”.

Melodic leaps this big are very rare. Statistically speaking, most steps between successive melody notes are small – usually just between adjacent notes in the musical scale. For music all around the world, the bigger the step, the less often it is used. Partly this may be because it’s generally easier to sing or play notes that are closer together, but there is also a perceptual reason. Small steps in pitch help to “bind” the notes into a continuous phrase: we hear them as belonging to the same tune. The bigger the step, the more likely we’ll perceive it as a break in the tune. This is one of the rules deduced by the Gestalt psychologists around the start of the twentieth century, who were interested in how the mind groups stimuli together to form an organized picture of the world that causes them. They were primarily interested in vision, but the ‘gestalt principles’ apply to auditory experience too.

But small pitch steps can sound boringly predictable after a while, like nursery rhyme tunes. To create memorable tunes, sometimes songwriters have to take a chance on bigger leaps. The one in the first two notes of “Over the Rainbow” is particularly big: a full octave. The same leap occurs at the beginning of “Singing in the Rain”. Typically only one percent or so of pitch steps in melodies are this big. That means they stand out as memorable – but how come we still hear it as a tune at all, when the gestalt principles seem to say that big jumps cause a perceptual break-up?

Well, Arlen (who wrote the music) has added safeguards against that, probably quite unconsciously. First, the two notes on “Some-where” are long ones – you could say that “-where” is held for long enough for the brain to catch up after the leap. Second, the leap comes right at the start of the song, before there’s even really been time for a sense of the tune to develop at all. Third, and perhaps most important, the leap is not alone. There are similar big jumps in pitch (although not quite as big) at the start of the second and third phrases too (“Way up…”, “There’s a…”). In this way, the composer is signalling that the big jumps are an intentional motif of the song – he’s telling us not to worry, this is just a song with big pitch jumps in it. This is a general principle: if you hear a big pitch jump in a melody, it’s very likely that others will follow. In this way, tunes can create their own ‘rules’ which can over-ride the gestalt principles and produce something both coherent and memorable.
Posted by Philip Ball at 2:40 AM