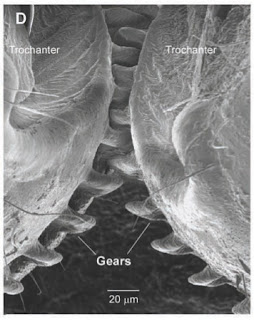 Here’s the initial version of my latest news story for Nature.

If you’re a young planthopper, leaping a metre in a single bound, you need to push off with both hindlegs perfectly in time or you’ll end up spinning crazily. Researchers in England have discovered that this synchrony is made possible by toothed gears connecting the two legs.

Zoologists Malcolm Burrows and Gregory Sutton of Cambridge University say that this seems to be the first example of rotary motion in nature coupled by toothed gears. They describe their results in Science [1].

Their microscopic images of the hindleg mechanism of the planthopper Issus coleoptratus show that the topmost leg segments, ending in partly circular structures, are connected by a series of tiny intermeshing teeth about 20 micrometres (thousandths of a millimetre) long.

When the insects jump, the two legs rotate together, the cog teeth ensuring that they thrust at exactly the same time. “The gears add an extra level of synchronisation beyond that which can be achieved by the nervous system”, says Burrows.

Planthopper nymphs can take off in just 2 milliseconds, reaching take-off speeds of almost 4 metres per second. For motions this rapid, some mechanical device is needed to keep the legs synchronized and avoid lopsided jumps that lead to spinning along the body axis. The problem doesn’t arise for grasshoppers and fleas: they have legs at the side of the body that push in separate planes rather than counter-rotating in a single plane, and so they can jump one-legged.

Toothed gears have been used in rotating machinery for millenia: Aristotle and Archimedes described them, and they seem to have been used in ancient China much earlier. But like the wheel, this human invention seemed previously to have little value in the natural world.

Now, however, the gear joins the screw-and-nut as a mechanism whose complex shape has been mastered by evolution. In 2011 Alexander Riedel of the State Museum of Natural History in Karlsruhe, Germany and his colleagues reported a screw-and-nut system in the leg joints of a weevil [2].

Riedel considers this new work “significant and exciting”. It adds to the view that “most of the basic components of engineering have been developed in the natural world”, he says. Perhaps gears are not more common, he adds, because there are different ways to achieve the same goal. Honeybees, for example, “couple the movement of both wings to stabilize their flight by using pegs, not as moving gears but more like a Velcro fastener.”

Curiously, the gears are only found in the young nymph insects. When they undergo their final moult, sloughing off their exoskeleton for the last time to reach full adulthood, the gears disappear and instead the legs are synchronized by simpler frictional contact.

Burrows and Sutton aren’t yet sure why this is so, but it might be because of ease of repair. “If a gear breaks it can’t be replaced in adults”, says Burrows. “But in nymphs a repair can be made at the next of several moults.” He also explains that the larger and more rigid adult bodies might make the frictional method work better.

Interesting business. I can't think of another case of rotary gears at the moment. The closest thing that has yet come to mind is the zipper-like closure once described in (if I recall right) ctenophore mouths.

So many creatures jump without such an obvious mechanical coupling between paired legs that it can't be too difficult to keep from going awry. In any case, some compensation would often be necessary for irregularity in stiffness and level of substratum, etc. One does wonder about whether proprioceptive feedback can work at the short times that would necessarily be involved.

M. Scherge and S.N. Gorb, in their 2000 book, Biological Micro- and Nanotribology, do quite a thorough job. The upshot seems to be that what Burrows describes may be functionally novel, but from a structural point of view it represents (as is so typical of evolutionary innovations) no spectacular discontinuity. They talk about coxal rather than trochanteral segments, one unit more proximal, of course, for whatever that matters.

Synchronizing legs may be no absolute requirement. After all, surfaces are irregular in level, resilience, and so forth, and the legs never push directly at the center of gravity of the insect. So perfect synchrony won't necessarily give a straight trajectory anyway. And some post-launch adjustment may be possible, either inertially or aerodynamically. (Zero-angular-velocity turns, as righting cats, or tail-swinging, as perhaps in jumping rodents that have convergently evolved long tails with hair tufts at their ends.)

Maybe gears such as these come with an odd disability--they really louse things up if they mesh out of register. Or maybe they're tricky to molt and get back into register.

Filleting the gear bottoms is an interesting fillip. For us that's a relatively recent development, I gather. We've made gears for a long time--the antikythera mechanism (100 bce) is a bunch of 'em. Ones that take reasonable torque might be more recent, but are still old - I found some in Agostino Ramelli (1588), unfilleted. And the gears salvaged from a horse ferry (1830) scuttled on Lake Champlain were unfilleted. Odd that no one seemed to have noticed that filleted gears are much, much less prone to getting knocked off, particularly with brittle cast iron.

I take mild issue with Burrow's use of ‘force' for acceleration. It's not only incorrect, but it tends to perpetrate the myth that insects are superstrong, instead of recognizing artifacts of scaling. I wrote an essay about the matter a few years ago; it became chapter 2 in "Glimpses of Creature in their Physical Worlds" (2009). The upshot is that we expect, and find, that acceleration scales (or bumps into a limit line) inversely with length - from jumping cougars down to shooting spores, five orders of magnitude. That keeps the stress on launch materials roughly constant, assuming roughly constant investment in the relevant guns. 200 or 500 g isn't out of line for their size. Good, but not earthshaking.

I'm amused to learn of yet another case of something I once commented on (in "Cats' Paws and Catapults") when trying to inject a note of reality into the hype and hope of biomimetics: "The biomechanic usually recognizes nature's use of some neat device only when the engineer has already provided us with a model. Put another way, biomechanics still studies how, where, and why nature does what engineers do."
Posted by Philip Ball at 2:10 PM