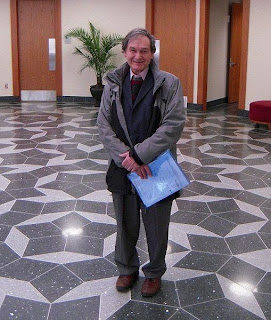 So the plan is that I’ll be writing a regular (ideally weekly) blog piece for Prospect from now on. Here is the current one, stemming from a gig last night that was a lot of fun.

Roger Penrose makes his own rules. He is one of the most distinguished mathematical physicists in the world, but also (this doesn’t necessarily follow) one of the most inventive thinkers. It was his work on the theory of general relativity in the 1960s, especially on how the gravity of collapsing stars can produce black-hole ‘singularities’ in spacetime, that set Stephen Hawking on a course to rewrite black-hole physics. That research made Penrose’s name in science, but his mind ranges much further. In The Emperor’s New Mind (1989) he proposed that the human mind can handle problems that are formally ‘non-computable’, meaning that any computer trying to solve them by executing a set of logical rules (as all computers do) would chunter away forever without coming to a conclusion. This property of the mind, Penrose said, might stem from the brain’s use of some sort of quantum-mechanical principle, perhaps involving quantum gravity. In collaboration with anaesthetist Stuart Hameroff, he suggested in Shadows of the Mind (1994) what that principle might be, involving quantum behaviour in protein filaments called microtubules in neurons. Neuroscientists scoffed, glazed over, or muttered “Oh, physicists…”

So when I introduced a talk by Penrose this week at the Royal Institution, I commented that he is known for ideas that most others wouldn’t even imagine, let alone dare voice. I didn’t, however, expect to encounter some new ones that evening.

Penrose was speaking about the discovery for which he is perhaps best known among the public: the so-called Penrose tiling, a pair of rhombus-shaped tiles that can be used to tile a flat surface forever without the pattern ever repeating. It turns out that this pattern is peppered with objects that have five- or ten-fold symmetry: like a pentagon, they can be superimposed on themselves when rotated a fifth of a full turn. That is very strange, because fivefold symmetry is known to be rigorously forbidden for any two-dimensional packing of shapes. (Try it with ordinary pentagons and you quickly find that you get lots of gaps.) The Penrose tiling doesn’t have this ‘forbidden symmetry’ in a perfect form, but it almost does. 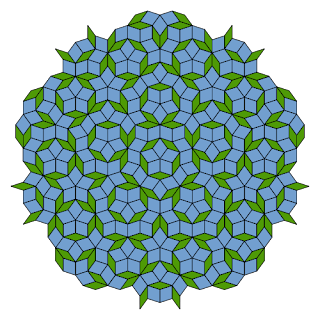 These tilings – there are other shapes that have an equivalent result – are strikingly beautiful, with a mixture of regularity and disorder that is somehow pleasing. This is doubtless why, as Penrose explained, many architects worldwide have made use of them. But they also have a deeper significance. After Penrose described the tiling in the 1970s, the crystallographer Alan Mackay – one of the unsung polymathic savants of British science – showed in 1981 that if you imagine putting atoms at the corners of the tiles and bouncing X-rays off them (the standard technique of X-ray crystallography for deducing the atomic structures of crystals) you can get a pattern of reflections that looks for all the world like that of a perfect crystal with the forbidden five- and tenfold symmetries. Four years later, such a material (a metal alloy) was found in the real world by the Israeli materials scientist Daniel Shechtman and his coworkers. This was dubbed a quasicrystal, and the discovery won Shechtman the Nobel prize in Chemistry in 2011. Penrose tilings can explain how quasicrystals attain their ‘impossible’ structure.

In his talk Penrose explained the richness of these tilings, manipulating transparencies (remember them?) like a prestidigitator in ways that elicited several gasps of delight as new patterns suddenly came into view. But it was in the Q&A session that we got a glimpse of Penrose’s wildly lateral thinking. Assembling a tiling (and thus a quasicrystal) is a very delicate business, because if you add a tile in the wrong place or orientation, somewhere further down the line the pattern fouls up. But how could atoms in a quasicrystal know that they have to come together in a certain way here to avoid a problem right over there? Maybe, Penrose said, they make use of the bizarre quantum-mechanical property called entanglement, which foxed Einstein, in which two particles can affect one another instantaneously over any distance. Crikey.

In Penrose’s mind it all links up: quasicrystals, non-computable problems, the universe… You can use these tiles, he said, to represent the rules of how things interact in a hypothetical universe in which everything is then non-computable: the rules are well defined, but you can never use them to predict what is going to happen until it actually happens.

But my favourite anecdote had Penrose inspecting a new Penrose tiling being laid out on the concourse of some university. Looking it over, he felt uneasy. Eventually he saw why: the builders, seeing an empty space at the edge of the tiling, had stuck another tile there that didn’t respect the proper rules for their assembly. No one else would have noticed, but Penrose saw that what it meant was that “the tiling would go wrong somewhere in the middle of the lawn”. Not that it was ever going to reach that far – but it was a flaw in that hypothetical continuation, that imaginary universe, and for a mathematician that wouldn’t do. The tile had to go.
Posted by Philip Ball at 1:20 PM