Maths of the pop-up tent 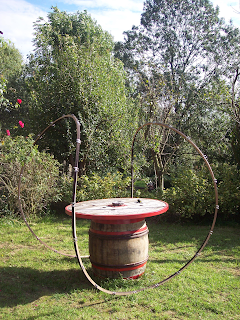 Here’s my latest news story for Nature. This image shows a wood sculpture made by the paper’s authors to illustrate their principles. It’s worth seeing the video of the folding process on the Nature site too – this is one of those problems that is much more easily expressed in images than in words.

Ever wrestled with a pop-up tent, trying to fold it back up to fit in the bag? Help is at hand, in the form of a mathematical theory to describe the shapes adopted by the kinds of stressed flexible rings from which these tents are made [1]. As a result, says team leader Alain Jonas of the Catholic University of Louvain in Belgium, “we have found the best way to fold rings”.

Rings buckled into three-dimensional shapes crop up in many everyday contexts. They are used not just for pop-up tents but to make laundry baskets, small soccer goals, and some wood and creased-origami sculptures, as well as appearing inadvertently in bicycle wheels with too-tight spokes.

Jonas and his collaborators also report microscopic versions made from rings less than a millimetre across carved by electron beams out of thin double-layer films of aluminium and silicon nitride. Because the packing of atoms in the two materials doesn’t match, the films become strained when stuck back to back, inducing buckling.

In all these cases, the shapes adopted by the rings look rather similar. Typically, two opposite edges might buckle upwards, producing a kind of saddle shape. In pop-up tents, these buckles can be bent further by hand to fold the single large ring into a coil of smaller rings.

The researchers show that all these shapes can be predicted accurately with a theory that invokes a single key mathematical concept: what they call ‘overcurvature’, which is the amount by which a circular ring is made more curved than a perfect circle. For a folded, coiled pop-up tent, for example, the final coils have more total curvature than the unfolded single ring would have.

Equivalently, one can introduce overcurvature by adding segments of arc to a circle. The researchers do this experimentally by cutting out coils of a Slinky spring and joining them together in a single ring. This allows them to study the shapes that overcurvature produces, and compare it to their mathematical theory describing the stresses that appear in such a ring and make it buckle. They can figure out, say, how many arcs need to be joined together to guarantee buckling into a specific shape – just the thing that a bent-wood sculptor might like to know.

“They find a universal family of shapes that can be produced in frustrated rings”, explains Basile Audoly of the Institute de Mécanique d’Alembert in Paris. “This is why the folded tent looks like the Slinky and the creased origami.”

The results can be used to work out the easiest folding pathways to collapse a single overcurved ring into a small coil – the problem of folding a pop-up tent. “It’s not trivial to find this pathway empirically”, says Jonas. “You naturally start by deforming the ring in two lobes, since this is easiest. But then you have to deform the ring further into shapes that require a lot of energy.”

In contrast, he says, “if you take the pathway we propose, you have to use more energy at the start, but then have to cross lower energy barriers to reach the energy valley of the ring coiled in three” – you don’t get trapped by following the path of initial least resistance. The researchers provide a detailed route for how best to reach the three-ring compact form.

They also show that such a ring can be made even more compact, folded into five rings instead of three. “This is more difficult, because the energy barriers are higher”, Jonas admits, saying that for a tent it would be best to have three people on the job. He sees no reason why this shouldn’t work for real tents, provided that the pole material is flexible and strong enough.

Jonas thinks that the results might also apply on the molecular scale to the shapes of some relatively stiff molecular rings, such as small, circular bacterial chromosomes called plasmids. Their shapes look similar to those predicted for some ring-shaped polymers squashed into spherical shells [2].

“There is a lot of interest currently in this kind of fundamental mechanical problem”, says Audoly, who points out that rather similar and related findings have been reported by several others [3-7]. For example, he says, the same question has been related to the buckled fringes at the edges of plant leaves, where tissue growth can outstrip the overall growth rate of the leaf to create excess ‘edge’ that must become folded and rippled as a result [3,4]. However, Jonas says that, compared to earlier work on such problems, finding that just the single parameter of overcurvature will describe the mechanical problem “has the virtue of allowing us to find general laws and provide easy-to-use designing tools.”


m-payment This weekend I walked through one of the shopping malls here in Stockholm. In less than a minute I had passed at least 4 different stores mobile e-commerce