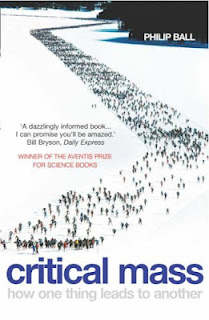 I often used to get asked if the image on the cover of the UK version of Critical Mass, shown here, is real (it is). It was a great choice by Heinemann, a perfect visual metaphor for the kind of social group behaviour that the book discusses. Now the science I presented there has been extended to include the very phenomenon depicted. In a paper in Physical Review E, Thomas Holleczek and Gerhard Tröster and of ETH in Zurich present an agent-based model of ‘skiing traffic’ - a modification of the pedestrian and traffic models that motivate the early part of my book, which incorporates the physics of skiing into the rules of motion of the agents. The researchers aim, among other things, to develop a model that can predict congestion on ski slopes, so that appropriate safety measures such as slope widening can be undertaken. It’s a complex problem, because the trajectories of skiers depend on a host of factors: the slope and friction of the snow, for example, may determine how many turns they make. To my eye, the work is still in the preliminary stages: the matching of model predictions with observed data for skier density, speed and number of turns still leaves something to be desired, at least in the cases studied. But already it becomes clear what the most salient factors are that govern these things, and the discrepancies will feed back into better model parameterization. There’s more on the work here.
Posted by Philip Ball at 10:20 AM

"But already it becomes clear what the most salient factors are that govern these things, and the discrepancies will feed back into better model parameterization."

So if the square peg doesn't fit in the round hole, keep bashing until it becomes a round peg!?

How's the 'Anthropogenic Global Warming' models going; now that it has officially evolved into 'climate change'?

Well, of course it is all about predictive capacity. If by calibrating your model (and models like this are sure to need calibration) under one set of circumstances you can explain the observations under another, you may be on to something. If every new data set needs a "recalibration", you've just got a sophisticated Pantograph.

This is of course true for climate models too...