Some of nature’s most delicate forms and patterns, such as the fluted head of a daffodil and the convoluted labyrinths of fingerprints, are created by buckling and wrinkling. These deformations are a response to internal stress, for example as a sheet of soft tissue grows while being constrained at its boundaries. Old paint wrinkles as the paint film swells in some places but stays pinned to the surface below in others.

Because buckling and wrinkling patterns can be highly regular and predictable, they could provide a way of creating complex structures by spontaneous self-organization. In a paper in Physical Review Letters [1], Nicholas Fang at the Massachusetts Institute of Technology in Cambridge and coworkers describe a way of controlling the buckling shapes in small tubes of soft material, and show that they can explain theoretically how the pattern evolves as the tube dimensions are altered.

“These patterns are lovely to look at”, says Michael Marder, a specialist on nonlinear dynamics at the University of Texas at Austin, “and if the ability to control patterns is not yet at the level of control that is likely to interest engineers, it’s a promising step forward.”

“Mechanical buckling has long been suggested as a means of pattern formation in biological tissues”, says mathematician Alan Newell of the University of Arizona, who has previously advanced this as an explanation for the spiral phyllotaxis patterns of leaves and florets. “What’s good about this work is that they do a precise experiment and their results tend to agree with simple theories.”

To ‘grow’ a deformable material so as to induce buckling, Fang’s team use a polymer gel that swells when it absorbs water. They explored tubular geometries not only because these are conceptually simple but because they are relevant to some natural buckling structures, such as the bronchial passage, which may become swollen and wrinkled in asthmatics.

The researchers used a microfabrication technique to make short tubes with diameters (D) of several mm, and walls of various thickness (t) and length (h). The tubes are fixed at one end to a solid substrate, creating the constraint that drives buckling. To induce swelling that begins at the free end of the tube, the researchers inverted the tubes in oil and let the ends poke into a layer of water below.

Swelling deformed the tubes into truncated cone shapes, which might then buckle into a many-pointed star-shaped cross-section. In general, the shorter the tubes (the smaller the ratio h/D), the more wrinkles there were around the tube circumference. Surprisingly, the wall thickness had relatively little influence: tubes with the same h/D tended to have a similar buckled shape regardless of the wall thickness.

To understand that, Fang and colleagues used a simple model to calculate the shape that minimizes the total elastic energy of a tube. Buckling costs elastic energy around the circumference, but it can also reduce the elastic energy due to outward bending of the tube as it swells. For a given set of parameters, the two contributions balance to minimize the total energy for a particular number of buckles – which turns out to depend only on h/D and not wall thickness. The experimental results mapped well onto these theoretical predictions of the most stable mode of deformation.

Fang, who usually works on photonic structures for controlling the flow of light, hopes that these regular buckles and wrinkles might offer ways of channeling and directing light and sound waves by scattering. “The basic idea is that the wrinkled structure could absorb or scatter the light field or acoustic waves in a directional way”, he says. “We’re currently testing such structures for applications in ultrasound-mediated drug delivery.”

The results may have implications for natural systems too. Fang says it’s no coincidence that the buckled gel rings resemble slices of bell pepper, for example. “Bell peppers can be considered as a tubular structure that grow under constraints from the ends”, he says. “Often we find a slice of slender peppers display a triangle shape and that of short and squat peppers appear in square or even star-like. Our model suggests that these patterns are determined by the ratio of length to diameter.” The team also thinks that the results might elucidate the buckling patterns of corals and brain tissue. 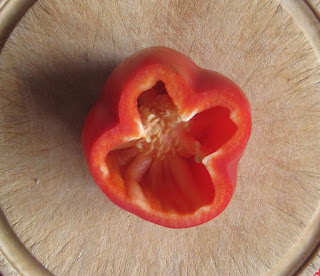 Xi Chen of Columbia University in New York, who has studied the buckling pattern on the surfaces of fruits and vegetables, is not yet convinced by this leap. “It’s not yet clear where the rather strict constraint on swelling – the key for obtaining the shapes described in their paper – comes from in nature. It’s interesting work but there’s still a large gap before it could be applied directly to natural systems.”

Newell raises a more general note of caution: similarities of form and pattern between an experiment and a theory are just suggestive and not conclusive proof that one explains the other. “To say that the pattern you observe is indeed the one produced by the mechanism you suggest requires one to test the dependence of the pattern on the parameters relevant to the model”, he says. “In this case, the authors test the h/D ratio dependence but it would also have been good to see the dependence of the outcomes on various of the elastic parameters.”

Buckling might conceivably also explain the surface patterning of some fruits and vegetables, such as pumpkins, gourds, melons and tomatoes. These have soft, pulpy flesh confined by a tougher, stiffer skin. Some fruits have smooth surfaces that simply inflate like balloons as they grow, but others are marked by ribs, ridges or bulges that divide them into segments (Fig. 1a). According to Xi Chen of Columbia University in New York, working in collaboration with Zexian Cao in Beijing and others, these shapes could be the result of buckling.

Fig. 1 Real (a) and modelled (b) buckled fruit shapes

This is a familiar process in laminates that consist of a skin and core with different stiffness: think, for example, of the wrinkling of a paint film stuck to wood that swells and shrinks. Under carefully controlled conditions, this process can generate patterns of striking regularity (Figure 2). 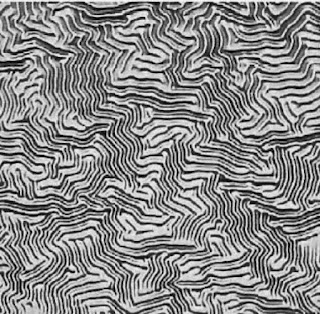 Fig. 2 Wrinkles in a thin metal film attached to a rubbery polymer

Chen and colleagues performed calculations to predict what will happen if the buckling occurs not on a flat surface but on spherical or ovoid ones (spheroids). They found well-defined, symmetrical patterns of creases in a thin, stiff skin covering the object’s surface, which depend on three key factors: the ratio of the skin thickness to the width of the spheroid, the difference in stiffness of the core and skin, and the shape of the spheroid – whether, say, it is elongated (like a melon or cucumber) or flattened (like a pumpkin).

The calculations indicate that, for values of these quantities comparable to those that apply to fruits, the patterns are generally either ribbed – with grooves running from top to bottom – or reticulated (divided into regular arrays of dimples), or, in rare cases, banded around the circumference (Figure 3). Ribs that separate segmented bulges are particularly common in fruit, being seen in pumpkins, some melons, and varieties of tomato such as the striped cavern or beefsteak. The calculations show that spheroids shaped like such fruits may have precisely the same number of ribs as the fruits themselves (Figure 1) 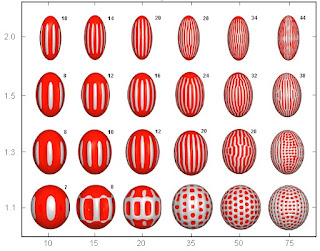 Fig. 3 Buckling shapes on spheroids as a function of geometry

For example, the 10-rib pattern of Korean melons remains the preferred state for a range of spheroids with shapes like those seen naturally. That’s why the shape of a fruit may remain quite stable during its growth (as its precise spheroidal profile changes), whereas differences of, say, skin thickness would generate different features in different fruits with comparable spheroidal forms.

Chen suggests that the same principles might explain the segmented shapes of seed pods, the undulations in nuts such as almonds, wrinkles in butterfly eggs, and even the wrinkle patterns in the skin and trunk of elephants. So far, the idea remains preliminary, however. For one thing, the mechanical behaviour of fruit tissues hasn’t been measured precisely enough to make close comparisons with the calculations. And the theory makes some unrealistic assumptions about the elasticity of fruit skin. So it’s a suggestive argument, but far from proven. Besides, Chen and his colleagues admit that some of the shaping might be influenced by subtle biological factors such as different growth rates in different parts of the plant, or direction-dependent stiffness of the tissues. They argue, however, that the crude mechanical buckling patterns could supply the basic shapes that plants then modify. As such, these patterns would owe nothing to evolutionary fine-tuning, but would be an inevitable as the ripples on a desert floor.

I daresay Figure 2 may have already put you in mind of another familiar pattern too. Don’t those undulating ridges and grooves bring to mind the traceries at the tips of your fingers (Figure 4)? Yes indeed; and Alan Newell of the University of Arizona has proposed that these too might be the product of buckling as the soft tissue is compressed during our early stages of growth. 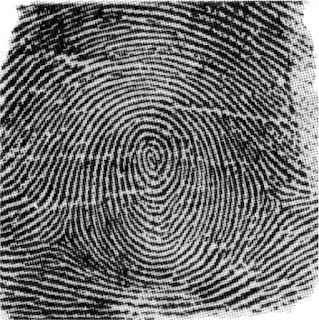 About ten weeks into the development of a human foetus, a layer of skin called the basal layer starts to grow more quickly than the two layers – the outer epidermis and the inner dermis – between which it is sandwiched. This confinement gives it no option but to buckle and form ridges. Newell and his colleague Michael Kücken have calculated what stress patterns will result in a surface shaped like a fingertip, and how the basal layer may wrinkle up to offer maximum relief from this stress.

The buckling is triggered and guided by tiny bumps called volar pads that start to grow on the foetal fingertips after seven weeks or so. The shape and positions of volar pads seem to be determined in large part by genetics – they are similar in identical twins, for instance. But the buckling that they produce contains an element of chance, since it depends (among other things) on slight non-uniformities in the basal layer. The American anatomist Harold Cummins, who studied volar pads in the early twentieth century, commented presciently on how they influence the wrinkling patterns in ways that cannot be fully foreseen, and which echo universal patterns elsewhere: “The skin possesses the capacity to form ridges, but the alignments of these ridges are as responsive to stresses in growth as are the alignments of sand to sweeping by wind or wave.” Newell and Kücken found that the shape of the volar pads govern the print patterns: if they are highly rounded, the buckling generates concentric whorls, whereas if the pads are flatter, arch-shaped ridges are formed (Figure 5). Both of these are seen in real fingerprints. 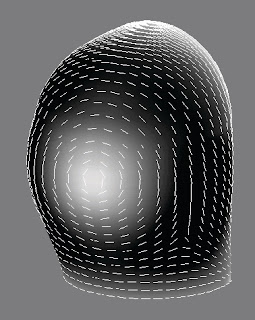 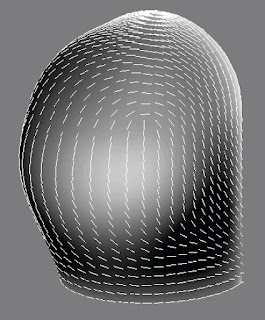 Fig. 5 Whorls (top) and arches (bottom) in a model of fingerprint patterns.
Posted by Philip Ball at 2:24 PM