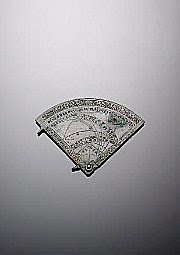 Medieval instrument suggests astronomical knowledge was widespread
[Here’s a story I picked up on a recent visit to the wonderful Museum of the History of Science in Oxford. It is published in Nature today. To my great embarrassment and dismay, while I was at Merton College many years ago, I knew of neither the museum nor of Merton’s ‘Chaucerian’ astrolabe mentioned below. But I was just a nipper then.]

The fate of a fourteenth-century pocket calculator is hanging in the balance, while the British Museum in London attempts to raise the £350,000 needed to acquire this extremely rare archaeological finding before the deferral of an export licence expires, releasing it to private sale.

The device, a brass astrolabe quadrant that can tell the time from the position of the sun, calculate the heights of tall objects, and work out the date of Easter, opens a new window on the mathematical and astronomical literacy of the Middle Ages, experts say.

Most surviving astrolabes are larger and more elaborate, and include other functions such as astrological calculations. Their use tended to be highly specialized, confined mostly to academic settings.

But the new quadrant is a simple, everyday item – the kind of thing a cleric or a merchant would have carried with them for convenient time-keeping. All the same, says Jim Bennett, director of the Museum of the History of Science in Oxford, “you had to know some astronomy to work one of these devices.” Bennett was an expert witness in the hearings that deferred a private sale. He says the device suggests that, at least within some parts of fourteenth-century society, “people had a closer astronomical awareness than we do now.”

Most intriguingly of all, the quadrant was found at Canterbury, and has been dated quite narrowly to about 1388, just before Geoffrey Chaucer began to write his Canterbury Tales. Chaucer was highly informed about astronomy and astrology, and in 1391 he wrote a treatise on the astrolabe that became the standard reference text for several centuries.

The Canterbury quadrant was found in 2005, when excavations revealed it beneath a series of clay floors on the site of an old inn called the House of Agnes, just outside the city walls on the main road to London. It had lain there for over 600 years. Conceivably it was lost at the inn by a merchant travelling to or from Canterbury, rather like Chaucer’s pilgrims.

The quadrant was initially put up for sale in 2007 by the auctioneers Bonhams, where it was expected to fetch £60,000-100,000. But subsequent dealings led to an agreed sale at a price of about £350,000 (neither dealer nor buyer has been publicly disclosed).

Because of the perceived cultural importance of the object, however, it was considered by the UK’s Reviewing Committee on the Export of Works of Art and Objects of Cultural Interest, which recommended to the government’s Culture Minister Margaret Hodge that granting of an export licence should be delayed until June 2008, giving time for the British Museum to try to buy the instrument for its forthcoming Medieval Gallery. Such decisions are usually applied to works of fine art, not to scientific items, Bennett says.

The quadrant was clearly made for use in England – it works only within a certain range of latitudes. It has design features that would appeal to medieval gadget freaks, Bennett says, such as a moveable eagle that indicates the date of Easter. “Relatively everyday pieces like this don’t usually survive”, he adds. A quadrant astrolabes kept in the library of Merton College in Oxford, one of the few other such instruments known, is considerably more elaborate and geared for academic use.

The existence of this simple, practical device sheds new light on Chaucer’s treatise. He dedicated it to his son – a gesture that has left scholars wondering whether this was just a literary affectation, since it seemed a little hard to believe that Chaucer could have expected a young person to appreciate an astrolabe’s uses. But the Canterbury quadrant “supports the idea that Chaucer could write such a treatise at a popular level”, says Bennett. “It suggests that this kind of knowledge wasn’t too arcane or academic.”
Posted by Philip Ball at 3:22 PM