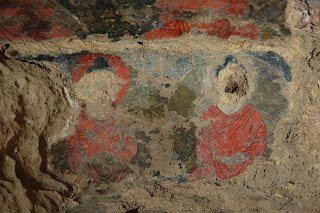 Buddha in oils?
[This is the pre-edited version of my latest news story for Nature.]

Painters on the Silk Road may have been way ahead of the Europeans.

Artists working in Afghanistan were using a primitive form of oil paint hundreds of years before it became common practice in Europe, a team of scientists has claimed.

Yoko Taniguchi of the National Research Institute for Cultural Properties in Tokyo and her coworkers have analysed samples of Buddhist paintings in caves at Bamiyan in Afghanistan, made in the mid-seventh and early eighth centuries AD. They say that the paint layers contain pigments apparently bound within so-called drying oils, perhaps extracted from walnuts and poppy seeds.

But Jaap Boon, a specialist in the chemical analysis of art at the Institute for Atomic and Molecular Physics in Amsterdam, the Netherlands, cautions that this conclusion must be seen as tentative until more detailed studies have been done.

The Bamiyan caves sit behind the gigantic statues of Buddha that were destroyed by the Taliban in 2001. The paintings, showing robed Buddhas and mythical creatures, were also defaced but not obliterated. The Bamiyan caves are now a designated UNESCO World Heritage site.

The researchers removed tiny samples of the painted surface (typically less than 1 mm across) for analysis using state-of-the-art techniques. These can reveal the chemical identity of the pigments and the materials used to bind them to a layer of earthen plaster on the cave walls.

Taniguchi’s collaborators used X-ray beams produced by the European Synchrotron Radiation Facility in Grenoble, France, to figure out the composition and crystal structures of pigment particles, deposited in a series of microscopically thin layers. The synchrotron facility produces extremely bright X-ray beams, which are essential for getting enough data from such small samples.

Meanwhile, spectroscopic methods, which identify molecular structures from the way their vibrations cause light absorption, were used to identify the organic components of the paint layers. The findings are described in a paper in the Journal of Analytical Atomic Spectrometry [1].

The researchers found pigments familiar from the ancient world, such as vermilion (red mercury sulphide) and lead white (lead carbonate). These were mixed with a range of binders, including natural resins, gums, possibly animal-skin glue or egg – and oils.

Boon suggests that this variety in itself raises concerns about potential contamination – microogranisms on the rock surface, say, or the fingerprints of people touching the paintings (something encouraged in Buddhist tradition).

He says that other techniques that really pin down what the organic molecules are should be applied before jumping to conclusions. With spectroscopy alone, he says, it can be difficult to tell egg from oils, let alone animal from plant oils.

But Marine Cotte of the Centre of Research and Restoration of the French Museums in Paris, a coauthor of the study, is convinced of the conclusions. She says that oils have an unambiguous spectroscopic signature, and adds that their molecular components have been confirmed by the technique of chromatography.

Oil painting is commonly said to have been invented by the Flemish painter Jan van Eyck and his brother Hubert in the fifteenth century. But while the van Eycks seem to have refined this technique to create stunningly rich and durable colours, the practice of mixing pigments with drying oils is known to be considerably older.

It is first mentioned in the late fifth century by the Byzantine writer Aetius, and a recipe for an oil varnish (in which a drying oil is mixed with natural resins) is listed in an eighth-century Italian manuscript.

In the twelfth century, a German Benedictine monk named Theophilus describes how to make oil paints for painting doors. Oil paints are also known from this period on Norwegian churches.

Drying oils are relatively slow to dry compared with the common medieval binders of egg yolk and size from boiled animal hide, which initially led Western craftsmen to regard them as fit only for rather lowly uses.

So the use of oils in fine art as early as the seventh century is surprising – all the more so for painting on plaster-coated rock, where the translucency of oil paints would not be expected to recommend their use. ‘It doesn’t make a lot of sense to use oils’, says Boon. He says that it would be really difficult to keep the paint in good condition for a long time in an environment like this, exposed to damp, fungi and bacteria.

But Cotte says that the oils are found in deeper layers where contamination would not penetrate, while being laid over an opaque bottom or ‘ground’ layer.

It’s not clear who these artists were, the researchers say. They were probably travelling on the Silk Road between China and the Middle East, and may have been bringing with them specialist knowledge from China.

Cotte says that these studies should aid efforts to preserve the paintings. “It helps you do that if you know what is there”, she explains – this would identify the most appropriate cleaning procedures, for example.