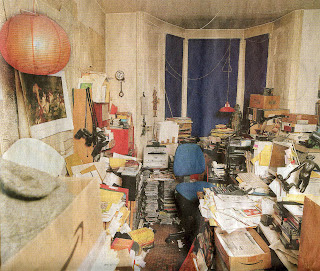 Here is another reason to love Russell Hoban (aside from his having written the totally wonderful Riddley Walker, and a lot of other great stuff too). It is a picture of his workplace, revealed in the Guardian’s series of ‘writers’ rooms’ this week. I love it. After endless shots of beautiful mahogany desks surrounded by elegant bookshelves and looking out onto greenery, like something from Home and Garden, here at last is a study that looks as though the writer works in it. It is the first one in the series that looks possibly even worse than mine.

The mystery is what all the other writers do. Sure, there may be little stacks of books being used for their latest project – but what about all the other ‘latest projects’? The papers printed out and unread for months? The bills unpaid (or paid and not filed)? The letters unanswered (or ditto)? The books that aren’t left out for any reason, other than that there is no other place to put them? The screwdrivers and sellotape and tissues and plastic bags and stuff I’d rather not even mention? What do these people do all day? These pictures seem to demand the image of a writer who, at the end of the day, stretches out his/her arms and says “Ah, now for a really good tidy-up”. That is where my powers of imagination fail me.

It all confirms that we simply do not deserve Russell Hoban.
Posted by Philip Ball at 10:37 AM

There is in fact a much better version of the pic at http://books.guardian.co.uk/graphic/0,,2208617,00.html and more detailed (and more atmospheric) shots at http://www.hoban2005.co.uk/recollections.html

Also if you like Riddley Walker, there is a rare production of the theatrical staging in Waterford, Ireland this week - details at http://red-kettle.com/site/productions/riddley-walker

Thanks a lot tc, those are great links. I have long wished for someone to stage Riddley Walker - it cries out for it. I've even considered trying to do that myself (I once performed the story "Hart of the Wud" as a short in a portfolio production). I wish I was in Waterford...