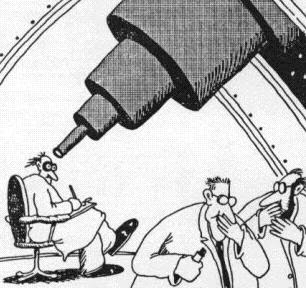 One Brian Robinson contributes to human understanding on the letters page of this Saturday’s Guardian with the following:
“Providing funding for astronomers does not in any way benefit the taxpayer. Astronomy may be interesting, but the only mouths that will get fed are the children of the astronomers. Astronomy is a hobby, and as such should not be subsidised by the Treasury any more than trainspotting.”
The invitation is to regard this as the sort of Thatcherite anti-intellectualism that is now ingrained in our political system. And indeed, the notion that anything state-funded must ‘benefit the taxpayer’ – specifically, by putting food in mouths – is depressing not only in its contempt for learning but also in its ignorance of how the much-vaunted ‘wealth creation’ in a technological society works.

But then you say, hang on a minute. Why astronomy, of all things? Why not theology, archaeology, philosophy, and all the arts other than the popular forms that are mass-marketable and exportable? And then you twig: ‘astronomy is a hobby’ – like trainspotting. This bloke thinks that professional astronomers are sitting round their telescopes saying ‘Look, I’ve just got a great view of Saturn’s rings!’ They are like the funny men in their sheds looking at Orion, only with much bigger telescopes (and sheds). In other words, Mr Robinson hasn’t the faintest notion of what astronomy is.

Now, I have some gripes with astronomers. It is not just my view, but seems to be objectively the case, that the field is sometimes narrowly incestuous and lacks the fecundity that comes from collaborating with people in other fields, with the result that its literature is often far more barren than it has any right to be, given what’s being studied here. And the astronomical definition of ‘metals’ is so scientifically illiterate that it should be banned without further ado, or else all other scientists should retaliate by calling anything in space that isn’t the Earth a ‘star’. But astronomy is not only one of the oldest and most profound of human intellectual endeavours; it also enriches our broader culture in countless ways.

The presence of Mr Robinson’s letter on the letters page, then, is not a piece of cheeky provocation, but an example of the nearly ubiquitous ignorance of science among letters-page editors. They simply didn’t see what he was driving at, and thus how laughable it is. It is truly amazing what idiocies can get into even the most august of places – the equivalent, often, of a reader writing in to say that, oh I don’t know, that Winston Churchill was obviously a Kremlin spy or that Orwell wrote Cold Comfort Farm. Next we’ll be told that astronomers are obviously fakes because their horoscopes never come true.
Posted by Philip Ball at 6:19 AM

And if it wasn't for Jodrell Bank, we wouldn't have Teflon coated woks!

You jest Jim, of course. But lest anyone take that notion too seriously, here's an article I wrote in Nature Materials a few years ago:

Thank goodness for space exploration, which has given us that vital ingredient of modern life: the perfect fried egg.

Or has it? Never mind the bathos, what about the facts? The idea that DuPont's Teflon was a spin-off from research on space technology is one of the most pervasive myths about today's materials. But it was nothing of the sort.

Polytetrafluoroethylene was in fact the serendipitous offshoot of research on refrigerators. When Roy Plunkett and his co-workers stumbled across it in 1938, they were attempting to make a new CFC refrigerant. This white plastic that resisted water, acids, organic solvents and fungus clearly had something going for it, and DuPont patented it in 1941.

The real boost for applications of PTFE came from the Second World War, when it was used under the code-name K416 as a protective coating against corrosive uranium hexafluoride in isotope separation for the Manhattan Project, as well as in aircraft engines and explosives manufacture. Seeing its commercial potential, DuPont registered the Teflon trademark in 1944 and developed mass-production methods. By 1950 the company's Teflon plant in Virginia was producing a million pounds in weight of the material a year, used largely as an insulator and sealant. Non-stick cooking equipment followed soon after, although DuPont was cautious about introducing it for domestic use until its safety had been established. Teflon-coated pans were all the rage by the time Yuri Gagarin flew in space in 1961.

So although PTFE featured in the space suits, blankets, heat shields and insulation of the lunar module in which Neil Armstrong and colleagues landed on the moon in 1969, such space applications were a minor sideline in the burgeoning Teflon market.

And yet the myth continues. US senator Kay Bailey Hutchison claimed only last February in the Dallas Morning News that not only Teflon but also Velcro "were developed through our space programme".

Why does this notion persist? One can't blame an over-zealous NASA press agency; indeed, it gives the impression that it would be relieved not to have to keep denying the tale. "There was a guy last week who was assuring me that Teflon was a NASA product", said a NASA spokesman earlier this year, "and I kept saying to him 'Show me the documentation'." The same is true of several other putative spin-offs, such as the instant fruit-drink Tang. "We didn't develop it", says the man from NASA, "we just bought it off the shelf like everyone else."

Partly this stems from a refusal to believe that wonderful modern materials can have such prosaic origins. But some banging of the spin-off drum is for propaganda purposes, as a way to revitalize the moribund and obsolete vision of manned spaceflight. Setting foot on Mars, claims Robert Zubrin of the Mars Society, would produce an even greater spin-off benefit than Teflon. If, in 30 years' time and after astronomical expenditure, that were to happen, I wonder what products we will be asked to thank it for — carbon nanotubes, perhaps?

In the good old days when we had an export industry, it made good economic sense to fund science.

Nowadays in our service economy, it will be ever more difficult to defend against the 'science is merely a hobby' allegation, unless you have a receipt.

A lot of the blame must go to University professors that over sell their research, and thereby devalue the credibility of science, whilst also commercialising it.

The last physics department poster session I witnessed (1995) was more like a conference for whelk stall holders.