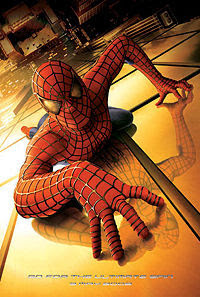 It could only happen in the movies
[This is the pre-edited version of my latest article for muse@nature.com]

Real science can’t compete at the movies with bad science. But perhaps that’s how it is meant to be.

“I’m arresting you for breaking the laws of physics”, says the policeman to the levitating man in a cartoon that speaks volumes, not least about the curiously legalistic terminology that science has adopted for its fundamental principles. In this spirit, two physicists at the University of Central Florida appear intent on making a citizen’s arrest of the entire Hollywood movie industry. In a preprint, they examine some egregious errors of physics in recent blockbusters [1].

The contempt that Hollywood shows for science is notorious. From loud explosions in deep space to genetically engineered spiders that transmute man into semi-arachnid, the movies are littered with scientific nonsense. But how much does this matter?

A lot, say Costas Efthimiou and Ralph Llewellyn. They argue that science bloopers in movies “contribute to science illiteracy.” Hollywood, they say, “is reinforcing (or even creating) incorrect scientific attitudes that can have negative results for society”.

If that is true, I suspect it’s not in the way they think it is. For decades, Hollywood has endorsed the archetype of the mad scientist [2] – an image that vastly predates the advent of cinema [3]. But recent portrayals of scientists in big movies are more nuanced: they are sometimes saviours (Armageddon), sometimes tortured geniuses (A Beautiful Mind), and most extraordinary of all, sometimes sexy (Jeff Goldblum in Jurassic Park).

Efthimiou and Llewellyn are less concerned with the image of science, however, than with its veracity. They explain (with equations) why the bus in Speed couldn’t possibly jump over a gap in a horizontal bridge segment of highway, why the Green Goblin in Spiderman couldn’t hold up the cable of the tramway between Manhattan and Roosevelt island, and why Magneto in X-Men: The Last Stand would have to glow like a lightbulb and lose 1350 pounds of body weight in order to shift the Golden Gate bridge by 5 km.

At face value, their analysis tilts at windmills. Let’s suppose, say, that the makers of X Men appreciated that by generating the power needed to achieve his feat, Magneto would need to emit about 18 million watts per square metre. Are we to suppose that viewers, seeing him become incandescent, would think “ah – blackbody radiation”. Or might they instead think “ah – superpowers make you glow”?

But these explorations of Hollywood’s scientific absurdities do raise some interesting questions. For example, how readily can we intuit cases of physics abuse? When we see superheroes perform impossible feats of gymnastics, do we innately sense that laws are being broken?

That question is often turned around in discussions of sporting prowess. No one supposes that baseball fielders or football players are predicting trajectories using Newtonian mechanics; rather, they seem to have a superior intuitive sense of its dynamical consequences.

The interesting question for movie makers (although I doubt that they formulate it this way) is not “how can I respect physical laws?”, but rather, “how can I break physical laws without shattering an illusion of plausibility?” The answer to that question might imply interesting things about how much our senses have been evolutionarily honed to appreciate the laws of physics. British biologist Lewis Wolpert has argued persuasively that, on the contrary, much of science depends on subverting intuitive reasoning about the world [4].

But should we endorse the violations of physics routinely perpetrated by Hollywood? Efthimiou and Llewellyn clearly think not. I would argue that you might as well complain about such ‘errors’ in the Greek myths or in fairy tales, or for that matter in Warner Brothers cartoons. Blockbuster movies are in many ways the modern equivalents of classical myths, their scenarios so unashamedly fantastic that we have no illusions about what we’re getting. I suspect movie-makers and movie-goers both understand this unspoken contract.

In fact, the unworldly exploits of superheroes have been used to good effect in physics education [5]. And Efthimiou and Llewellyn have themselves already acknowledged that Hollywood’s bad physics provides a superb vehicle for cultivating students’ skills at making back-of-the-envelope estimates, or what are now known as Fermi problems (because of Enrico Fermi’s talent for finding ways to make estimates about seemingly obscure or intractable quantitative questions) [6,7].

One might argue that scenarios such as the bus jump in Speed are more troubling, as they tend to be presented in an apparently realistic mode. I’m not so sure; this scene is merely replaying an old movie convention (the death-defying leap – see John Wayne in Brannigan), and indeed the more serious shortcoming is its lack of imagination.

The main message people take away from movies, however, isn’t concerned with how the physical world works; it is about narratives. Bad physics is far less dismaying than, say, the militaristic bravado of Independence Day or the xenophobia of True Lies.

Nonetheless, if you crave an antidote to Hollywood’s bad science, you can find it on YouTube, where sixteen scientists working on a project to make gas sensors from carbon nanotubes are posting video diaries of their progress.

In this project, called Nano2Hybrids and supported by the UK-based Vega Science Trust, the Belgium-based scientists are receiving video training from an experienced documentary maker, and they record their results on a website where viewers are encouraged to leave feedback.

The aim is to show people how scientific research really works. So I expect to see weeks of frustration as experiments fail, lots of staring at computer screens, tedious late-night observational runs, and some 18-rated language when the referees’ reports arrive. It’s already reassuring to see so few white lab coats.

This isn’t the first attempt to put science on YouTube. But it may be the first to try to fully document a research project this way. That could be highly informative, not least because it should explode some hoary myths about what scientists do and how they behave.

But somehow, I doubt that a scientist describing her results in front of a laptop will compete with Spiderman swinging around Manhattan. And that’s as it should be, because fantasy is not supposed to be constrained by the mundane laws that confound scientists in the lab.

Interesting reading, and thanks for the plug for nano2hybrids... (although we're not all Belgians! We're in rainy Nantes and we've got colleagues down in sunny Spain :-) )

If you really don't want to suspend your disbelief, here's Jon Hare's pages on the Speed bus:
http://www.creative-science.org.uk/Hollywood.html

I wish I'd seen Jon's programmes - they should go up on YouTube. I didn't know this is what he's up to now.
No, I didn't mean to imply that you were all Belgians (though I'm a rare fan of Belgians), but just that was where the project was based. But I see it is more dispersed than that.