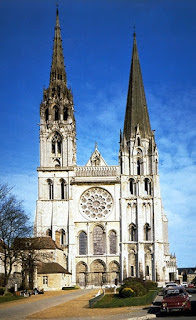 Late last year I nearly froze my tender parts off standing on the turret of a ruined Tudor mansion in Sussex taking about Chartres cathedral. (Tudor? Well, fortunately it was shrouded in icy fog.) I was being filmed for programme being made for the National Geographic channel on the building of the cathedral, the subject of my forthcoming book Universe of Stone (published next May by Random House and Harper Collins, since you ask).

I’ve just been sent a DVD of the result, which you can watch here. It is not terrible. That doesn’t sound much of a recommendation, but frankly it has become hard to expect very much of history programmes now. There is, of course, a lot of footage of people running around dressed a peasants or bishops, looking respectively angry or devout. For what was presumably a very modest budget, some of the footage looks rather impressive: in particular, nice graphics of the building (which I’d love to get my hands on for the book, instead of slaving away pencil in hand). But I’d have liked rather more of the real cathedral, without all the soft focus and computer enhancement – it doesn’t need tarting up like that.

Needless to say, every last bit of drama is wrung from the story, often at the cost of stepping way beyond what we can confidently say. I found myself several times saying “Are you sure?”, or “How do you know that?” We get the standard line on issues such as the Cult of the Carts and the donation of the Windows of the Trades, which have now been more or less debunked. We get the usual mystical speculation about the labyrinth (walk it if you like, but don’t assume that medieval pilgrims did the same). Some things, such as the novelty of the flying buttresses and of the bleu de Chartres in the windows, are just plain wrong, in an attempt to make Chartres seem more innovative than it was. I sensed some influence of John James’ dodgy ‘contractors of Chartres’ idea. So I’m afraid this is very much a ‘guide book’ picture of what went on, which treats the history in a rather cavalier fashion. But there are some nice remarks by the contributors (I liked the sceptical angle on the miraculous survival of the Sacred Tunic), and I suppose all one can really hope for is that a programme like this makes you consider going to Chartres, which you certainly should.

As for the British guy who tells us solemnly that we know nothing about the master builder of Chartres except that “he must have been very experienced” – well, duh. It must have been the cold squeezing the blood from my brain.
Posted by Philip Ball at 3:23 PM

In the vid, Prof Whats-his-face states the simplicities inherent in the architecture derived by the circle square and equal-lateral triangle... then the commentator draws us the triangles via bisecting the square at the corners !?

Maybe they should have hired a Nobel laureate.

P.S. Congratulation on keeping all your hair pretty boy ;)