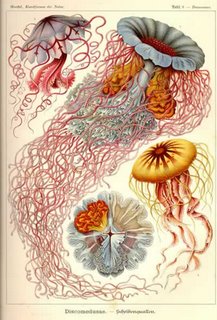 [This is a review of a book on the zoological art of Ernst Haeckel, to be published in Nature.]

When Nature’s millennial issue of 1900 listed the most important scientists of that age, there was only one German biologist among them: Ernst Haeckel, professor of zoology at the University of Jena. Reckoned to have been instrumental to the introduction of Darwinism in Germany, and responsible now for inspiring generations of scientists with his stunning drawings of the natural world, Haeckel still retains a claim to such recognition. He is perhaps most widely known now as the author and illustrator of Art Forms in Nature, a series of plates published between 1899 and 1904 that showed the marvellous forms and symmetries of creatures ranging from radiolarians to antelopes.

But few scientists of his time are more complicated. He was the archetypal German Romantic, who toyed with the idea of becoming a landscape painter, venerated Goethe, and was prone to a kind of Hegelian historical determinism that sat uncomfortably with Darwin’s pragmatic rule of contingency. Haeckel’s view of evolution was a search for order, systematization and hierarchy that would reveal far more logic and purpose in life than a mere struggle for survival. His most famous scientific theory, the so-called biogenetic law which argued that organisms retread evolutionary history as they develop from an egg (‘ontogeny recapitulates phylogeny’), was an attempt to extract such a unifying scheme from the natural world.

It can be argued that this kind of visionary mindset, when it creates strong preconceptions about how the world ought to be, does not serve science well. Haeckel supplies a case study in the collision between Romanticism and science, and that tension is played out in his illustrative work. Olaf Breidbach’s text to this lovingly produced volume never really gets to grips with that. It has a curiously nineteenth-century flavour itself, declining to grapple with the difficult aspects of Haeckel’s life and work.

Here, for instance, is a proposition: Ernst Haeckel’s influence on fin-du-siècle German culture was pernicious in its promotion of a ‘scientific’ racist ideology that fed directly into Nazism. That case has been made (by historian Daniel Gasman in particular), and while it can be debated, Breidbach goes no further than to admit that Haeckel became a ‘biological chauvinist’ during the First World War, and that ‘sometimes the tone of his writing was overtly racist.’ Breidbach admits that this is not a biography as such, but an examination of Haeckel’s visual heritage. Yet one could argue that Haeckel’s dark side was as much a natural consequence of his world view as was Art Forms in Nature.

The claim that Haeckel doctored images in order to make them fit with a preconceived notion of how biology works is harder to ignore in this context. Even in his own time he was accused of that (particularly by his rival Wilhelm His), and to my eye the evidence (see Nature 410, 144; 2001 and Science 277, 1435; 1997) looks pretty strong. But Breidbach skates over this issue, alluding to the allegations only to suggest that the illustrations ‘instructed the reader how to interpret the shapes of nature properly’. Well, indeed.

On the whole, though, Breidbach simply explains Haeckel’s reliance on image without assessing it. Haeckel’s extraordinary drawings were not made to support his arguments about evolution and morphogenesis; rather, they were the arguments themselves. He believed that these truths should be apparent not by analysing the images but simply by looking at them. ‘Seeing was understanding’, as Breidbach says. If that’s so, it places an immense burden of responsibility on the veracity of the images.

This is the nub of the matter. Breidbach suggests that Haeckel’s drawings are schematic and that, like any illustrator, Haeckel prepared them to emphasize what we are meant to see. But of course this means ‘what Haeckel has decided we should see’. Quite aside from whether he hid nascent appendages that challenged his biogenetic law, consider what this implies for the plates of Art Forms in Nature. They are some of the most beautiful illustrations ever made in natural history – but it seems clear now that Haeckel idealized, abstracted and arranged the elements in such a way that their symmetry and order was exaggerated. They are pictures of Platonic creatures, the ideal forms that Haeckel intuited as he gazed into his microscope. Their very beauty betrays them. They are, as Breidbach says (but seemingly without critical intent), ‘nature properly organized.’ In this way ‘the labour of the analyst was replaced by the fascination of the image’. Absolutely – for ‘fascinate’ used to mean ‘bewitch’.

It is not as if Haeckel did not have the alternative of photography – for microphotography was used as early as the 1850s. Breidbach recapitulates the arguments against an over-reliance on the veracity of photography (these ideas have been much discussed by cultural critics such as Vilém Flusser), pointing out that what one sees is determined by the technology. That is true, and it is apt to give photography a false authority. But are hand-drawn images really any better – let alone those rendered with such apparent skill and realism that their schematic nature is disguised? Indeed, Haeckel felt compelled in 1913 to publish Nature as an Artist, a series of photographs of his subjects which, he said, demonstrates that ‘there can be no talk of reconstruction, touching up, schematisation or indeed forgery’ in his drawings of the same. It was a remarkable work in its own right, but leaves us wondering why Haeckel did not use photos in the first place.

Another danger of such imagery is that it is prone to reflect the artistic styles of the day. Haeckel’s drawings fed into the florid, nature-inspired designs of the Art Nouveau and Jugendstil schools – but he was more influenced than influence. His medusae look like William Morris prints precisely because they have had that visual aesthetic imprinted on them. Breidbach says that for Haeckel, as for Goethe, ‘aesthetics is the foundation of his view of nature.’ But is that a good thing? As Ernst Gombrich has pointed out, artistic styles create unconscious biases and errors: when Gombrich speaks of the artist who ‘begins not with his visual impression but with his idea or concept’, it might as well be Haeckel he is talking of. And what happens when the cultural aesthetic moves on – does nature have to follow suit? Breidbach points out that, by using the visual language of his age, Haeckel helped to make science accessible to the public. But 20 years later, modernism had rendered his arabesque style old-fashioned.

As director of the Ernst Haeckel Museum at Jena, Breidbach has unequalled access to Haeckel’s notes and sketchbooks, and he makes good use of them. But perhaps for that very reason he felt unable to dig too deeply into the problematic areas his subject raises. (Haeckel is clearly still very much a legend at Jena, where his brain was cast in silver.) So although this is undoubtedly a gorgeous book, and the questions it raises are fascinating, I can’t help feeling that it represents an opportunity missed.
Posted by Philip Ball at 1:57 PM