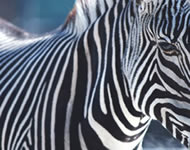 Here is the pre-edited version of my Crucible column for the January 2007 issue of Chemistry World.There’s considerably more on this issue in the forthcoming reworking of my 1999 book The Self-Made Tapestry. OUP will publish this as a series of three books, probably beginning in late 2007.

How did the leopard get its spots? Recent research supports an idea first suggested by legendary code-breaker Alan Turing.

After another long time, what with standing half in the shade and half out of it, and what with the slippery-slidy shadows of the trees falling on them, the Giraffe grew blotchy, and the Zebra grew stripy, and the Eland and the Koodoo grew darker, with little wavy grey lines on their backs like bark on a tree trunk; and so, though you could hear them and smell them, you could very seldom see them, and then only when you knew precisely where to look.

Kipling’s Just So story of how the animals of Africa obtained their distinctive marking patterns is a fine example of Lamarckism – the inheritance of environmentally acquired characteristics, in this case via what seems to be a kind of tanning process imprinted with the shadows of trees. But the explanation that his contemporary biologists would have offered, invoking Darwinian adaptation (the markings being assumed to serve as camouflage), was arguably little more than a Just So story too. It explained why a marking pattern, once acquired, would spread and persist in a population, but it could say nothing about how such a pattern came to be, either in evolutionary terms or during the embryonic development of a particular zebra, giraffe or koodoo.

It seems clear that this is not merely a genetic painting-by-numbers: the markings on two animals of the same species are recognizably alike, but not identical. How do the melanin pigments of animal pelts get distributed across the embryonic epidermis in these characteristically blotchy ways?

The favoured explanation today invokes a mechanism proposed in 1952 by the British mathematician Alan Turing, two years before his suicide by cyanide. Turing is best known for his work on artificial intelligence and the concept of a programmable computer, and for his wartime code-cracking at Bletchley Park. But his paper ‘The chemical basis of morphogenesis’ was something else entirely. It was an attempt to explain how the development of a body plan kicks off.

The fundamental question is how a spherical ball of cells ends up as a shape in which different cells, tissues and appendages are assigned to different locations. How does the initial spherical symmetry get broken? Turing’s comment reminds one of the old joke about physicists over-simplifying biology: “a system which has spherical symmetry, and whose state is changing because of chemical reactions and diffusion, will remain spherically symmetrical for ever… It certainly cannot result in an organism such as a horse, which is not spherically symmetrical.”

Turing proposed a set of differential equations which explained how molecules determining cell fates, called morphogens, might diffuse through a spherical body and induce (bio)chemical processes. Such a scheme is now called a reaction-diffusion system. The patterning results from competition between an autocatalytic reaction, which amplifies random chemical inhomogeneities, and diffusion, which smoothes them out. Turing’s calculations performed by hand (his notion of a digital computer was then barely realized) showed that patchiness could emerge. But it wasn’t until 1972 that Hans Meinhardt and Alfred Gierer in Germany clarified the essential ingredients of Turing’s model. The chemical patterns arise in the presence of an autocatalytic ‘activator’ molecule, and an inhibitor molecule that suppresses the activator. If the inhibitor diffuses more rapidly than the activator, then the concentration of activator is enhanced over short distances but lowered by the inhibitor over longer distances. This gives rise to islands of activator surrounded by regions where it is suppressed.

Calculations showed that this ‘activator-inhibitor’ mechanism could create orderly patterns of spots and stripes, more or less equally sized and equidistant. That brought to mind the leopard’s spots and the zebra’s stripes. But is such a system anything more than a pretty mathematical fiction? That wasn’t clear until 1990, when a team led by Patrick De Kepper at the University of Bordeaux identified the first chemical Turing pattern, using a reaction that, when well mixed, oscillated between yellow and blue states. This was closely related to the Belousov-Zhabotinsky (BZ) reaction, which was known since the 1960s to generate travelling chemical waves. The BZ reaction is a reaction-diffusion system, but does not itself produce stationary Turing patterns, because the relative diffusion rates of the reactants don’t fit Turing’s model.

Are patterns in the living world really made this way? Theoretical activator-inhibitor systems have now been able to provide very convincing mimics of a wide range of animal markings, from the reticulated mesh of the giraffe’s pelt to the crescent-shaped rosettes of the leopard and jaguar, the spots of the ladybird and the stripes of the zebrafish. All this looks plausible enough, but the clinching proof – the identification of diffusing morphogens responsible for pigmentation – has yet to be obtained.

There does now seem to be good evidence that chemical morphogens of the sort Turing envisaged act in biological development. Several proteins belonging to the class called transforming growth factor b proteins seem to act this way in fly and vertebrate morphogenesis, signalling the developmental fate of cells as they diffuse through the embryo.

But does anything like Turing’s mechanism act to shape embryos beyond the question of marking patterns, as Turing suggested? In general, embryogenesis seems more complex than that, operating under close genetic control. However, Thomas Schlake and colleagues at the Max Planck Institute of Immunobiology in Freiburg have very recently discovered that there is at least one other biological patterning process that apparently uses the activator-inhibitor mechanism. They have found that the follicles of mouse hair are positioned in the epidermis by the protein products of two classes of gene, called WNT and DKK. The former appears to take the role of activator, inducing follicle formation, while several variants of DKK proteins act as inhibitors1.

Hair and feather positioning has long been suspected as an example of a Turing pattern – the equidistant, roughly hexagonally packed patterns are just what would be expected. Schlake and colleagues have made that case by looking at how over-expression of WNT and DKK alters the follicle patterns on mutant mice, showing that these match the predictions based on an activator-inhibitor model. It is probably the best reason yet to think that Turing’s intuition was sound.

Isn't Notch patterning an activation-inhibition process as well? I might be wrong about that, mind...

Hey there my name is Steve, I like your website. I liked the combination of content and layout and am trying to come up with a layout for my site that will work as well and look as professional as yours. I would appreciate it if anyone could look at my discount motorcycle helmet site and give me your honest opinion. Please drop any comments on my site that you would like and let me know what you think. Thank you anyone who could take a couple of minutes to help out! I'm pretty new at this and still learning so much, man it's a lot of work!