Out of the ashes of Notre Dame 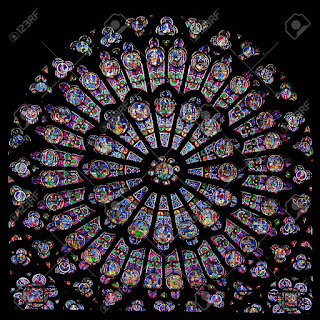 There is no positive spin to put on the fire that has gutted Notre Dame Cathedral, and it could sound idiotic to think otherwise. This was one of the masterpieces of the Gothic era, a place where – as Napoleon allegedly said of Chartres – an atheist would feel uneasy (although this atheist instead felt moved and inspired). I don’t yet know the extent of the damage, but it is hard to imagine that the thirteenth-century northern rose window will have survived the inferno, or that the west front of the building, which has been called “one of the supreme architectural achievements of all time”, will emerge intact. Even if the building is eventually restored – and I am sure it will be – one might wonder what will be the point of a twenty-first-century facsimile, bereft of the spirit and philosophy that motivated the original construction.

And yet… The Gothic cathedrals already undermine notions of “authenticity”. In past ages, they weren’t seen as buildings that had to be maintained in some “pristine” state at all costs. Ever since they were erected, they were modified and redesigned, sometimes with very little care for their integrity. This happened at Notre Dame in the seventeenth century, when the flame of Gothic had long gone out. There was a fashion for plonking grotesque, kitsch marble sculptures in place of medieval statuary, which was indeed the fate of Notre Dame’s high altar. The vandalism went on through the eighteenth century – and that was even before the Revolutionaries did their worst, melting down metal bells, grilles and reliquaries and then using the cathedral as a kind of warehouse. The Gothic revival of Viollet-le-Duc in the nineteenth century had better intentions but not always better taste.

This was ever the way, even in the Middle Ages: bishops would decide that their cathedral had become old-fashioned, and would commission some new extension or renovation that as often as not ended up as a jarring clash of styles. The notion of conservation and a “respect for the old” simply didn’t exist.

And that’s even before we consider the ravages of unintentional damage. Many of the wonders of Gothic architecture only came about as a result of fire in the first place. That is how we got Chartres: thanks to a fire in 1194 that destroyed the building commissioned in the 1020s (after the cathedral before that was burnt down). The conflagration was devastating to the morale of the local people: according to a document written in 1210, they “considered as the totality of their misfortune the fact that they, unhappy wretches, in justice for their own sins, had lost the palace of the Blessed Virgin, the special glory of the city, the showpiece of the entire region, the incomparable house of prayer”. Yet look what they got in its place.

And they had no hesitation in putting a positive spin on it. Another early thirteenth-century account asserted that this was God’s will – or the Virgin’s – all along: “She therefore permitted the old and inadequate church to become the victim of the flames, thus making room for the present basilica, which has no equal throughout the entire world.”

And so it went on throughout the Middle Ages and beyond: the astonishing edifices of the Gothic masters fell or burnt down, got neglected or half-dismembered, were subjected to undignified “improvement”, were ransacked or, later, bombed. Chartres has had catastrophic fires too: no one seems now too bothered that the original roof and allegedly wonderful timberwork beneath it were consumed by flames in 1836, or that the replacement we see today was originally intended only to be temporary.

What happened today at Notre Dame is truly a tragedy. But we shouldn’t forget that these magnificent buildings have always been works in progress, always in flux. Perhaps, in mourning what was lost, we can see it as an opportunity to marvel again at the worldview that produced it: at the ambition, the imagination, the profound union of technical skill and philosophical and spiritual conviction. And we can consider it a worthy challenge to see if we can find some way of matching and honouring that vision.
Posted by Philip Ball at 2:57 PM

Situs Judi Bola said...
This comment has been removed by a blog administrator.
12:52 AM

Gadis Nakal said...
This comment has been removed by a blog administrator.
2:58 AM

Bola Pelangi said...
This comment has been removed by a blog administrator.
1:48 AM

Della said...
This comment has been removed by a blog administrator.
4:52 AM

prince said...
This comment has been removed by a blog administrator.
1:17 AM

Minat Jesisca said...
This comment has been removed by a blog administrator.
11:02 AM

Honouring these driving forces would be much easier were there not a time limit (of 5 years was it?) imposed on the repairs. As you say, these buildings were always in flux, worked on continously. It took hundreds of years to build Fountains Abbey.
Can we capture this essence of monumental technical and creative genius when we're in a hurry? I'm not so sure...

I really impressed after read this because of some quality work and informative thoughts .
I just wanna say thanks for the writer and wish you all the best.Sattaking

wow what a great blog!

please check out my sites if you like earning money.

best site for satta king result, leak number  all game record charts. We provide 100% fix number direct from Satta king gali company which includes all famous games like Satta king Desawar, Gali Satta, Ghaziabad, Faridabad, Shri Ganesh Satta, Taj Satta King, charminar and other games of Satta Market Matka is also a simple game and essentially is a form of old lottery games. Ratan Khatri was the founder of this game in the 70 century and was become popular up until the 90 century. The game is not played that much anymore mostly in the regions of North India and Pakistan. Instead, many enjoy the lottery games Satta king result  more so these days.
Here is an example card. satta-king.online is the no1 satta king site where you can get the fastest Satta result, Satta king leak number (confirm jodi), Old Satta King ghaziabad, Daily leak Jodi, Desawar Jodi, Satta king faridabad, Satta record chart, Satta king taj, Gali Satta result, Ghaziabad Satta Result, Satta Bazar result and 100% passing fix Jodi today.